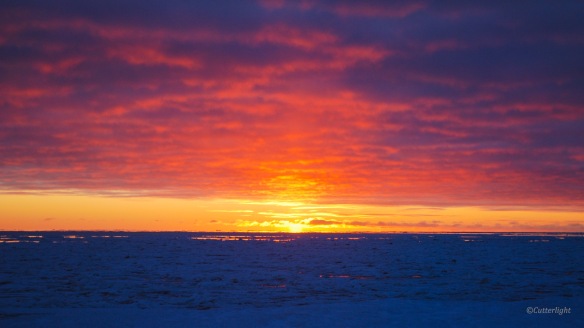 This November 19, 2011 sunset looking out over a Chukchi Sea nearly frozen solid reminded us of a Mark Rothko painting. The quality of light in the far north is often breathtaking.

Tikigaq’s sod, driftwood and whalebone igloos (homes) were occupied until the mid-1970’s when the village was abandoned due to erosion from the sea. By this time, some of the houses were wired for electricity. Sigluaks, freezers dug deep in the permafrost at Tikigaq, are still used by the people of nearby Point Hope to store the whale meat they’ve harvested.

If a man loses anything
and goes back and looks carefully for it
he will find it…
Tȟatȟáŋka Íyotȟake (Sitting Bull) – Pine Ridge Reservation Speech, 1883

Tatanka Yotanka (1831-1890) was a Lakota Sioux holy man who earned his place in history through his fierce resistance to white encroachment on Lakota lands. A vision he had seemed to foretell the victory a combined force of Sioux and Cheyenne would have over United States troops led by General Custer at The Battle of Little Bighorn in 1876. In 1880, Tatanka Yotanka was assassinated by Indian Agency Police at Fort Yates on the Standing Rock Agency (reservation) who feared that he would lead an uprising. His remains are buried near his birthplace in Mobridge, South Dakota. A monument marks the site. 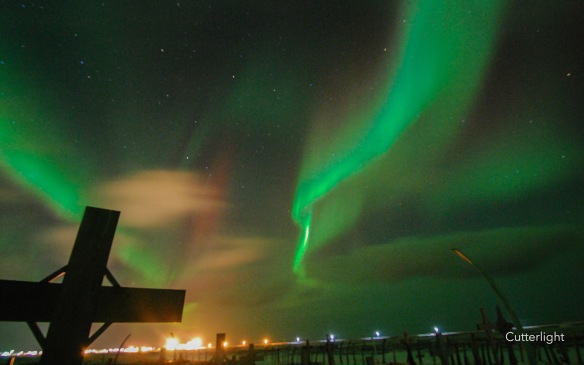 Solar winds disrupting Earth’s magnetic field cause the Aurora Borealis. They are often most spectacular on finger-numbingly cold nights in the depths of winter.

Point Hope is an Inupiaq Eskimo village of about 750 inhabitants located 200 miles above the Arctic Circle on Alaska’s North Slope. Originally known as Tikigaq (index finger for the slender peninsula that once extended into the Chukchi Sea before erosion took it away), the area is one of the oldest continuously inhabited places in North America. Subsistence hunting for caribou and Bowhead Whales continues to be an important part of the culture. With no roads existing beyond the village, the local airport (lit up in the above photo) is an important lifeline to and from the outside world.

…the aurora borealis flaming coldly overhead,
…the stars leaping in the frost dance,
…the land numb and frozen under its pall of snow…
Jack London – from The Call of the Wild, 1903

– Jack London (1876-1916) was one of the first authors to become wealthy writing fiction. Mostly self-educated, after stints as a hobo, a sailor, and 30 days in the Erie County Penitentiary in the state of New York for vagrancy, he made his way to California where he attended high school and began writing in earnest.

dg nanouk okpik is an Inupiaq-Inuit poet from Alaska’s North Slope. Nanouk is Polar Bear and Okpik is Cloudberry in the Inupiaq language. Her book Corpse Whale was published by the University of Arizona Press in 2012.