Eulachon are packed with oil when they begin their spawning run – roughly 15% of their body weight. Dried, they can be lit and will burn like a candle, which is why early explorers in North American called them candlefish. The term eulachon is derived from the Chinook language.

When the hooligan are making their spring-time run in the Pacific Northwest, dip-netters from Oregon to Alaska gather along the banks of their natal streams and rivers to scoop up a few pounds for the pan and the smoker. An anadromous species, these members of Osmeridae (the smelt family) spend most of their lives in the ocean and ascend the rivers of their birth to spawn and die. At this time, they don’t feed, so dip-netting is the best way to harvest them. 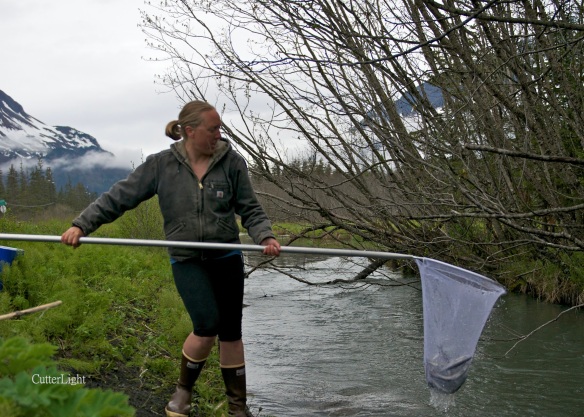 Our friend Krystin scoops up a netful of hooligan from a small stream near Seward.

Fiddlehead ferns, fireweed shoots or asparagus lightly sautéed in olive oil and finished with a squirt of lemon make a fitting accompaniment for a meal of freshly caught smelt. One of our favorite cooking methods for the fish themselves is to roll them in cornmeal, wrap them in bacon, fry them whole and serve them wrapped in a crisp leaf of Romain lettuce – a lettuce-smelt taco. (See Bacon-Wrapped Smelts for more on this recipe.) 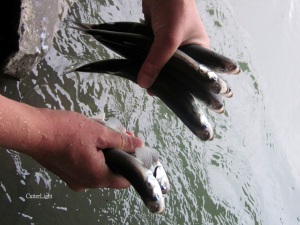 Right: When the fish are in, it can be possible to catch them by hand. It took Krystin a few minutes to grab these fish one at a time.

Another great way to enjoy hooligans is to smoke them, and that’s the way our friends Bixler and Krystin recently prepared them. They use a commercially prepared dry rub, but making your own is easy enough. Typical dry rubs feature about one cup of non-iodized salt to four cups of brown sugar. Garlic, ginger, cloves, nutmeg and allspice are among seasonings commonly added to give brines more flavor. Simply pack the fish in the brine in a glass baking dish, place in the fridge for a day or so, rinse the fish, pat the fish dry with paper towels and smoke for about eight hours. (See Alaska Fast Food: Smoked Hooligans at Alaskagraphy.)

The bones of cooked or smoked smelt are soft, and many people (including us) eat them whole from head to tail. Gravid females (those with ripe roe) are our favorites.

Zaru soba – cold buckwheat noodles – is a perfect dish for the hot weather we’ve been having lately. Topped with a smoked smelt from the refrigerator, this dish can be garnished with salmon roe, nori or served as is. You can used a store-bought noodle dipping sauce or make your own with a little rice vinegar, a little soy sauce, a little brown sugar, ice-cold water and a sprinkling of sesame seeds.

12 thoughts on “Smelt Smoked or Fried (Eulachon, Hooligan or Candlefish)”