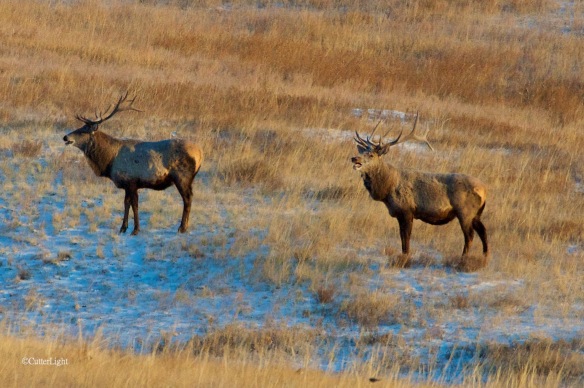 Historically, red deer ranged from the British Isles east through Mongolia and other parts of Asia and south into northern Africa. Until about two decades ago, their numbers in Mongolia were strong with some 130,000 individuals taking advantage of forest, steppe and mountain habitat. In recent years, however, poaching has decimated red deer herds in this country as their antlers command increasingly high prices as an ingredient in traditional medicines in China and elsewhere. Even National Football League players in America have been implicated in purchasing these medicines. Elk and red deer grow new antlers each year. When the antlers are growing, they are covered in soft tissue and are said to be “in velvet.” This is when the antlers are valuable.

Here’s the problem for the elk and deer. Some studies indicate there may actually be health benefits gained from using medicinal antler and regardless of the science, a lot of people believe they derive benefit from the antler. The trade is annually running over 1.5 billion U.S. dollars, and it is destroying populations of these magnificent animals. Although no recent population surveys have been conducted, it is believed that there are now fewer than 10,000 red deer in Mongolia.

On a recent trip to Mongolia’s Hustai National Park, we encountered a herd of approximately 100 mature male red deer. Separated by sex during the winter months, females were miles away in a different part of the park. These stags will drop their anglers in early spring.

Among deer, only Alces alces – called moose in North America and Eurasian elk in Europe and Asia, North American elk (wapiti), and sambar deer are larger. Adult male red deer attain weights between 550 – 770 pounds (250 – 345 kg). Some subspecies grow even larger. The extinct Irish elk, Megaloceros, which occupied much of the same range as modern-day red deer, was believed to have attained a weight of 1,500 pounds (700 kg) and had truly massive, moose-like antlers – perhaps contributing to its demise. Because of their value as a food and game species (these are the “harts” and “stags” of European hunting lore), red deer have been introduced to New Zealand, Australia, Chili and Argentina. 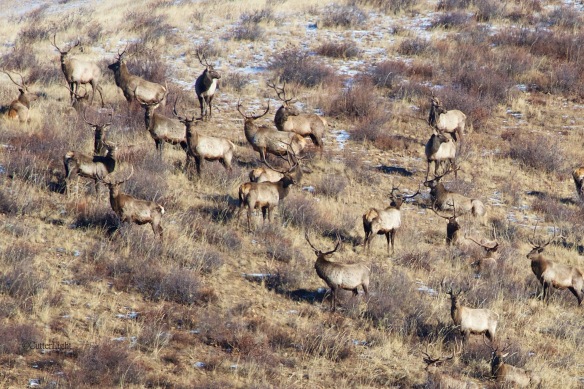 We stalked these deer stooping and crawling for about half a mile (1 kilometer). Suddenly nearly all of them stood up – 100 animals including the ones outside the frame of this photo -, made nervous by an approaching rider on a horse.

Rutting season occurs in autumn. The rest of the year females and young form distinct groups away from the mature males.

It’s not just poachers that prompt vigilance among red deer. This wolf track spotted near a herd of females and young was fresh.

Some scent on the air kept causing the largest of these three males to look back.

Dozens of stags stream over a break in the hillside. In a land where nomads and their herds have shared the landscape with wild animals for millennia, the countryside would seem empty without the red deer. As Mongolia’s human population continues to grow, it will become increasingly necessary that places such as Hustai National Park are protected if the deer are to continue to thrive.