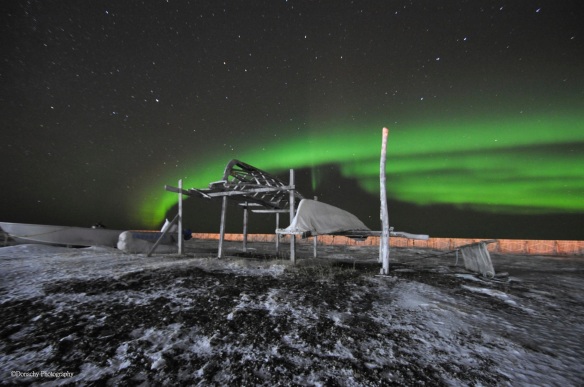 The northern lights have been out nearly every night lately. Here they frame two umiak – seal skin boats used for the spring whale hunts.

A Whaler to his Son

on a new lead

a snow squall on the horizon

imprinted in the snow

a fluke flipped and sounding

washed over the Chukchi

on an ivory dawn 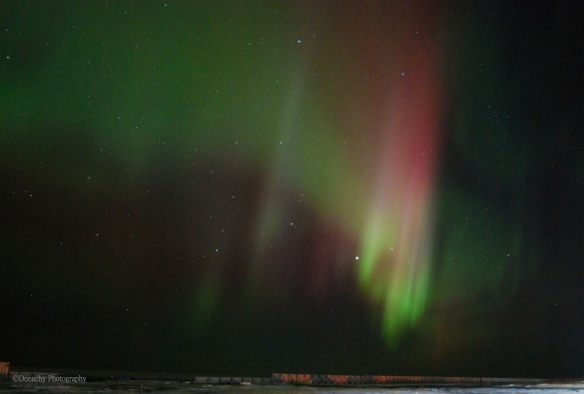 Named for the Roman Goddess of dawn, Aurora, and the Greek word for north wind, Boreas, Aurora Borealis events originate with the sun and are carried to Earth on solar winds. 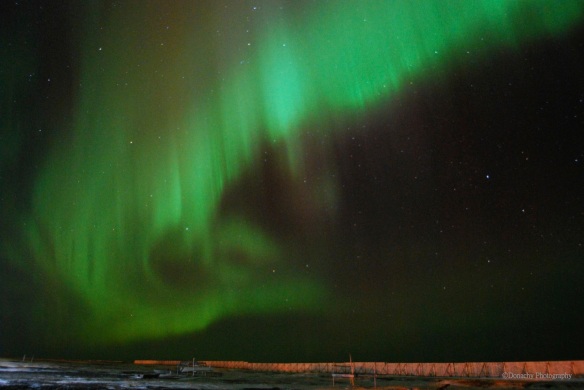 Notice the seal skin boats in front of the snow fence in this photo looking northwest along the lagoon at Point Hope. The most common color for  Northern Lights is green – whitish green on nights of weak activity. Yellows, pinks, reds and purples are less common. Any color in the night sky is a thrill. 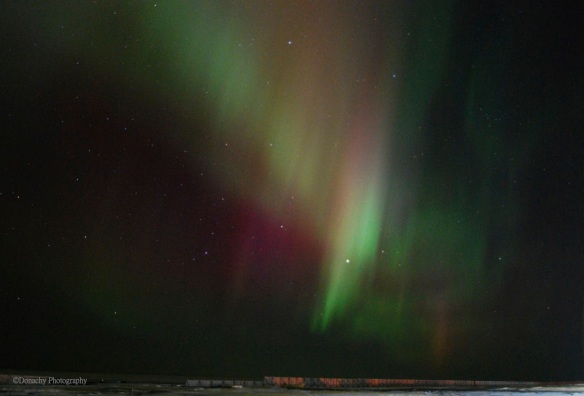 We have a phone tree set up so we can let each other know when the lights are out in force. When our phone woke us just after five AM this morning, we didn’t even pick up. We threw on warm clothes and coats (the windchill was below zero degrees Fahrenheit) put together the camera and tripod, and headed out the door. 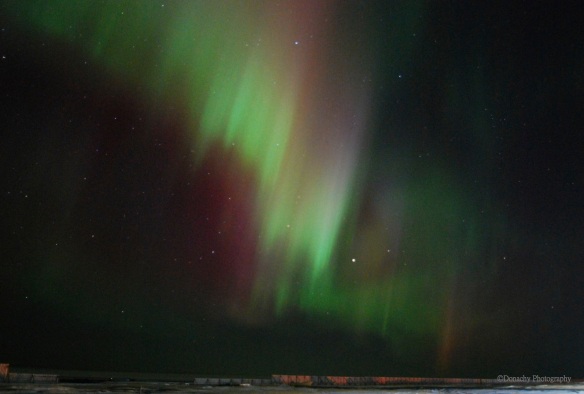 We walked away from the town’s lights, to the darkness near the lagoon, and set up. We took these shots with a 15 second exposure. When the lights are active, they move, constantly changing shape and color.

Mars hangs above a water silo aglow with lights from the school, a band of auroral light seeming to shoot from the silo like flames. (Click on photos for larger images.) 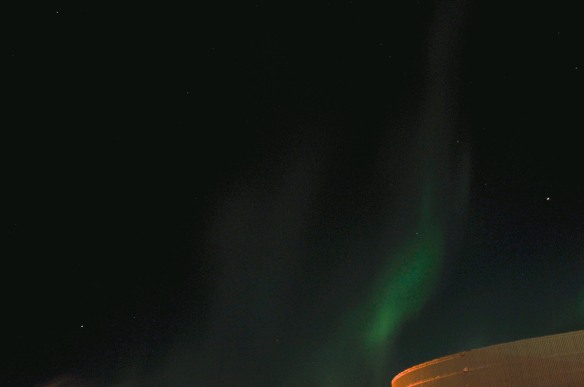 No photo – and certainly not our first attempts – can do justice to a northern sky on fire and dancing with the eerie green and purple glow of an Aurora Borealis. On this night 200 miles above the Arctic Circle, temperatures were an icy negative 10, pushed even lower by a steady breeze. As the sun sank below the frozen sea to the west, the full moon emerged in the east, close to Earth and huge, the color of a blood orange, hanging on the horizon. Jupiter and Venus were aligned, Mars glowed red as an ember against the black sky and Orion’s belt burned bright. Washing over it all was a breathtaking display of slowly moving green bands, some of them edged in purple, some of them jagged and electric, the band on the northern horizon streaked with pink mixed in with the green.

It’s not uncommon to see a bit of faint green or greenish yellow in the night sky up here. But what we were seeing on this night was of a different magnitude – a rare event tracing back to a spike in activity on the Sun a a few days ago. We made a few quick phone calls to friends. “Go outside and look up!” Meanwhile we got our camera and gear together, realizing, suddenly, that we weren’t  sure how to capture any of this. We met one of our friends in front of the school and walked with her toward the lagoon on the north side of town, away from the lights. In every direction, from horizon to horizon and straight overhead, what we saw stunned us. “This is amazing,” we kept repeating. 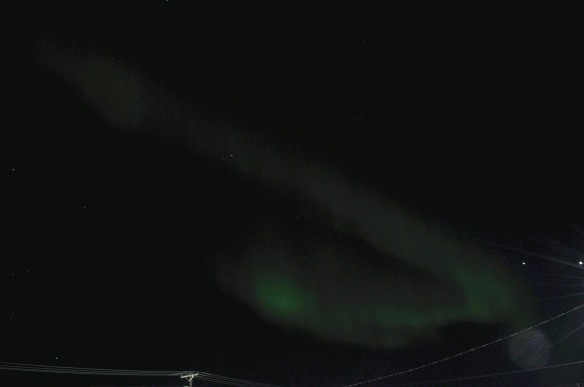 Note the three aligned stars of Orion’s belt to the left.

By the time we got our camera figured out, our fingers hurt with cold and the peak of the lights was past. But we still got some photos. A large part of photography is capturing light, and this was a quest for capturing light on a sublime scale.

Fireworks over the Columbia River while sharing a bottle of wine from a balcony at my apartment in Astoria, Oregon, tumblers of Scotch and a sky so impossibly filled with stars we felt like the deck of our mountain cabin in Yosemite was sailing through the Milky Way, a full moon hanging over a becalmed ocean on Prince William Sound with not another boat on the water, a campfire, mesmerizing, at our tent site at Oregon’s Sunset Bay State Park… night skies to come in remote anchorages on the Pacific… Our lives are filled with light.

The good, the bad, and the tasty this week.

The bad. We heard that every year about this time, there is a lice breakout. I don’t know enough about lice to know if the eggs hibernate until a certain temperature, or what happens. I have learned more about lice this year than I ever wanted to know! The only bugs that I have seen up here are flies and tiny red spiders that live outside. We missed the short window of mosquitoes in the summer. This has been an unusual year in the sense that there have been several outbreaks of lice. It has become such a big issue that they are shutting the school down next week, during our spring break, to thoroughly clean. It’s a bit of a drag for us because we shower and do laundry at the school. Fortunately, we have a friend who lives in a house with running water, so we’ll have a backup plan. Makes me itchy every time I think about it.

The good. We saw the most amazing display of northern lights last week. The lights, when visible, can be seen anywhere from 11 p.m. to 3 or 4 a.m. Those are sleeping hours for us. The first time we saw the lights, it was because someone pounded on the door to wake us. Last week, I was shocked awake by Jack jumping up out of bed exclaiming “the lights” as he looked out our bedroom window. Apparently, people were banging on our door and throwing snowballs at our bedroom…I didn’t hear any of it.

I didn’t bother taking my camera out because I didn’t think I could capture them. You’d think because we are so far north, the aurora borealis would be seen all the time. Because of the path of the lights, this has only been the third night this winter that we’ve seen a decent display of the aurora. Imagine looking up at the sky and seeing greenish swirls above and all around. By the horizon, we saw just a hint of purple in the lights. They traveled and moved swiftly. They are said to dance. They curved and morphed from streaks to bands before my eyes. Beautiful and amazing.

The tasty. The week ended with pecan turtle bars. A soft butter cookie base with a buttery, sugary, carmel-y layer covering chopped pecans. The whole cookie was then blanketed with swirled melted semi-sweet chocolate chips. They were cut in small pieces in order to enjoy one or two with less guilt. Oh, my!