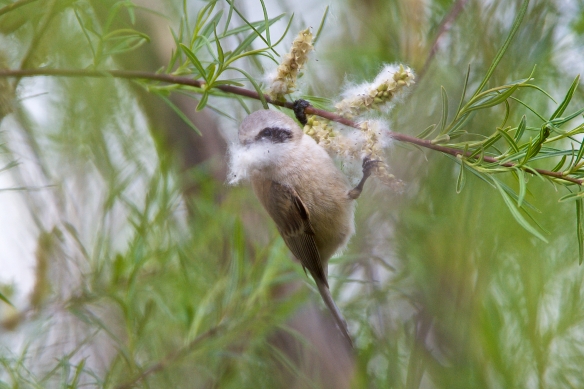 His face stuffed with down from willow catkins, this male white-crowned penduline tit (Remix coronatus) was hard at work finishing one the bird world’s most unique nests. (Eight more photos)

During this past winter, we found a couple of mitten-shaped nests suspended from bare branches near the Tuul River. The birds were long gone, but I looked up the nest: Penduline tits, a new species for us and one we hoped to see when they returned in springtime. So, on a recent evening as I was walking along the river, I was listening for something I hadn’t heard before. With the willows and poplars now leafing out, I figured song was my best bet at locating nesting pendulines.

Sure enough, not long into my walk I heard something I hadn’t heard before – a twittering and song that sounded like it came from a small passerine. I followed the voice till I thought I was as close as I dare get without spooking whatever was singing, quietly set up my camera and tripod, froze, listened, tried to part the dense willow tangles with my eyes, caught movement and hoped the bird would present itself where I could get a decent photo.

Above is my first photo of a penduline tit.

I knew that finding the bird was no guarantee I’d find his nest, but using clues from the nests we’d stumbled upon over the winter, I located the same sort of tree in the same sort of setting, looked carefully among the boughs about 17 feet up, and there it was, hidden in plain view. Penduline tits do not reuse their nests, but they do seek out the same habitat year after year.

There was cloud cover off and on, it was getting late in the day, and the light was all wrong to shoot the nest from the front, so I moved to the side. I was concerned about spooking him off his nest (the males do most of the building), so I kept a distance and tucked in behind some small willows.

Cottony-soft and virtually impervious to rain and predators, these tough, tightly-woven nests were used as children’s slippers in Europe in the past. The Masai of Africa used those of a related species as purses. This one was swaying and rocking in the fresh spring breezes.

Intervals of several minutes passed between the bird’s visit to his nest. I waited still and quiet, my ears straining for his voice among the songs and sounds of rose finches, azure tits, magpies, sparrows and other birds in the riverine forest. I was able to spend a fair amount of time with this little fellow. Above, he is heading into his nest with more downy material.

In this frame I caught him just as he was disappearing into his nest. I read that there is a flap, which the bird must open, inside the nest. 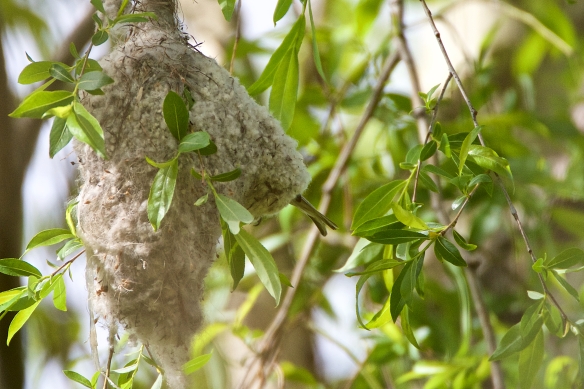 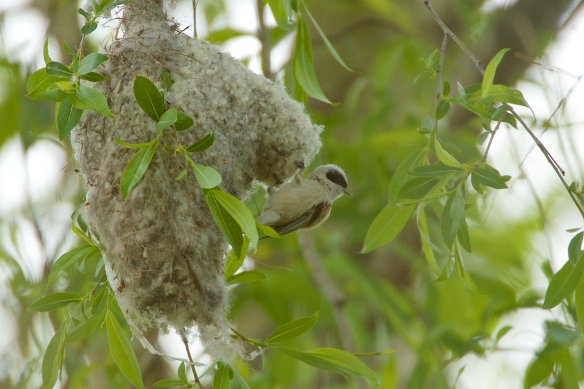 A quick look over his shoulder… 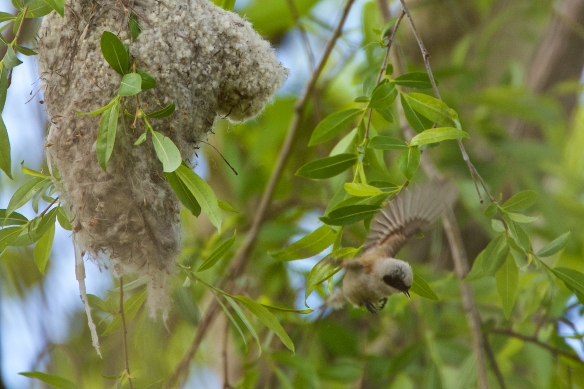 …and off again for more material.

Click these links to read more about our birding and hiking adventures near Ulaanbaatar, Mongolia 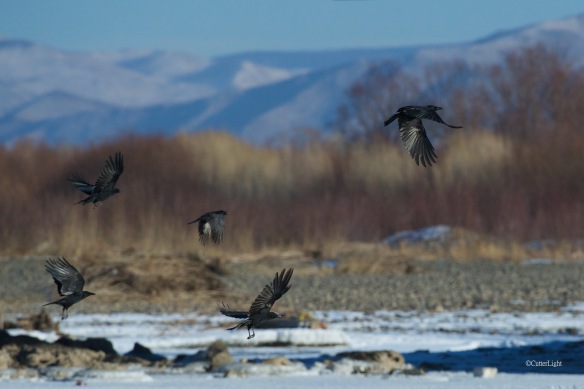 Corvids – a group which includes crows, ravens, rooks, jays, magpies and nutcrackers – fascinate. On a frigid December afternoon, we found them ice-fishing for caddis larvae in Mongolia’s Tuul River in the heart of Ulaanbaatar. (Click any of the photos for a larger view.)

The most intelligent of all birds, and with a brain-to-body-mass ratio rivaling that of the great apes and cetaceans, crows and their allies often exhibit remarkable behavior. Members of this family have been observed using and to some degree engineering purpose-specific tools – the only nonhuman animal other than the great apes to do so. There’s little doubt that certain feeding behaviors adopted by crows have been learned by watching other birds and animals. 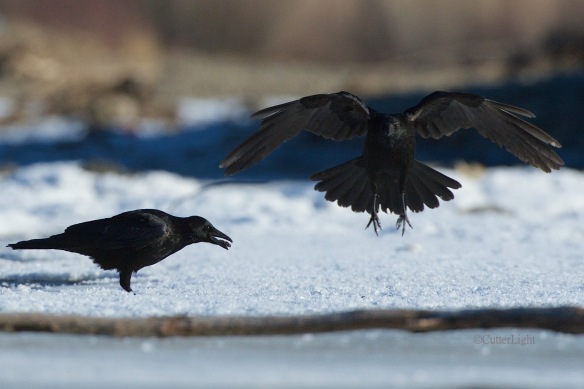 Note the object in the beak of the crow on the left. It’s a caddis larva casing.

The Tuul River flows through Ulaanbaatar, Mongolia’s capital city. Despite urbanization, the river’s water quality remains high – good enough to support species of trout as well as sensitive aquatic insects such as mayflies, stoneflies and caddisflies – species which spend the early part of their lives as larvae on the bottoms of clean rivers and streams. The Tuul is fast-flowing. Consequently, despite weeks on end of sub-freezing temperatures, here and there pockets of water remain open over shallow, stony, silt-free bottom.

We took a cue from watching the crows and began scanning the ice for caddis larvae casings. As our eyes tuned into the proper size and shape, the empty husks appeared everywhere. This casing, constructed of tiny sticks and pebbles, is about 1.5 inches long (3.8 cm) and belonged to a member of the Northern case maker caddisfly family.

Perhaps the crows learned of the abundance of wintertime food in these areas of open water by watching dippers – a robin-sized bird that happily plunges into pools and riffles in all seasons in search of aquatic insects and small fish. In fact, on this day we saw a white-throated dipper submerge itself in one of the riffles where the crows were feeding and come up with a small fish.

Here a carrion crow (Corvus corone) has his prize – a caddis larva pried from its pebble and stick casing.

Not adapted to plunge into water, the crows were fishing from the edge of the ice – thus gaining access to water not overly deep, but deep enough to provide habitat for slow-moving caddis larvae. Resourceful birds, are crows.