Big, tender and tasty, Razor Clams are avidly sought along Pacific Northwest beaches. The year these were dug, the limit in Alaska was 60 clams per person.

…drop to your knees now & again…
& kiss the earth & be joyful & make much of your time…
For although you may not believe it will happen,
you too will one day be gone.
I whose Levis ripped at the crotch for no reason,
assure you this is the case. Pass it on.
Steve Kowit – Notice, 2000

– In 1966, Steve Kowit (1938-2015) sent the U. S. Army a letter: Were he drafted to fight, the letter stated, he would fight for the other side. He then married the love of his life and spent the next few years in Mexico and Central America before returning to the U.S. to live in California.

The Inupiat Eskimos of Point Hope, Alaska (population 750) harvest an average of five to 10 Bowhead Whales each spring as part of their subsistence traditions. The season begins in March as whaling crews begin making trails over the frozen sea – at times an arduous task as the sea ice has often buckled up into fairly tall, jagged ridges and it may be several miles over frozen ocean to reach the open leads where the Bowhead and Belugas migrate. Crews still use traditional umiaks, boats made by stretching the skin of Bearded Seals over handcrafted wooden frames. Managed for sustainability, the Chukchi Sea’s Bowhead Whale population is increasing.

When I recall places like this, I wish nothing more than for this to be he way it is for the rest of my life – pointing a pickup truck upstream, upriver, up tide, cutting through forests or along beaches, looking for fish in places only a few people know about, can get to… have time for.
Jack Donachy – from Gravel Lick, 1991

Silver on Ice: Onboard Gillie, Gulf of Alaska outside Resurrection Bay

Also known as Silver Salmon, tens of thousands to hundreds of thousands of Coho Salmon return to Resurrection Bay near Seward, Alaska each summer where they constitute the greatest Coho Salmon sport fishery in the world.

I must go down to the sea again, for the call of the running tide
Is a wild call and a clear call that may not be denied;
And all I ask is a windy day with the white clouds flying,
And the flung spray and the blown spume, and the sea-gulls crying.
John Masefield – Sea Fever, 1912

John Masefield (1878-1967) went to sea at the age of 16. About a year later he deserted ship, initially thereafter living as a vagrant and taking odd jobs, but the awe he experienced on the open sea never left him. Masefield was England’s Poet Laureate from 1930-1967. 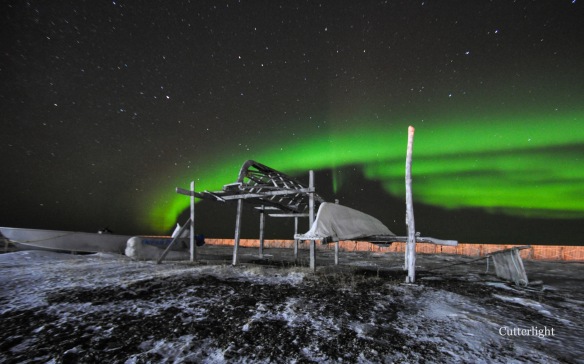 dg nanouk okpik is an Inupiaq-Inuit poet from Alaska’s North Slope. Nanouk is Polar Bear and Okpik is Cloudberry in the Inupiaq language. Her book Corpse Whale was published by the University of Arizona Press in 2012.

At over 4,400 feet in altitude, Ulaanbaatar, Mongolia, is the world’s coldest national capital city. Lows of -20° F and lower – sometimes much lower – are common.

She was as beautiful a dancer
as he was a fly caster.
Norman Maclean – A River Runs Through It, 1976

Norman Maclean (1902-1990) was 70 when he began writing A River Runs Through It and Other Stories. Rejected by every major publishing firm, the novella and two accompanying short stories were finally accepted by Chicago University Press where Maclean had taught in the Department of English. The book, which was almost instantly recognized as a classic, became the first piece of fiction the CU Press published.

Redpolls breed in Arctic regions around the world, descending into lower latitudes in winter. A bird of the North, they generally are uncommon south of Canada.

For John Clare
The whole scene is fixed your mind,
the music all present,
as though you could see
each note as well as hear it.
John Ashbery, lines from For John Clare, published in 1969

John Ashbery’s (1927-) poetry has earned nearly every major award including the Pulitzer. The subject of this poem, John Clare (1793-1864), emerged from difficult early years to write beautiful poetry about the natural world before later being institutionalized for insanity.