Like a vast infinity pool, Chignik Lake pulls in the mountains and sky and seems to go on forever.

We woke before dawn to clear skies, still air and frost. With noon temperatures projected to reach a nearly summer-like high of 50° F, it was the perfect day for the three-mile hike from Chignik Lake up to Clarks River. By the time we downed hot bowls of steel cut oats and slabs of energy-rich, thick-cut bacon, the sun had cleared the snow-capped mountaintops across the lake from our house. Outside the air was still brisk from the nighttime freeze, but American Robins, Golden-crowned Sparrows, Sooty Fox Sparrows, Pine Grosbeaks and Redpolls were already filling the sleepy village with song. We didn’t know it yet, but Violet-green Swallows would arrive later in the day to add to the chorus.

By the time we hit the trail, soft sunlight was beginning to brush the frost off crowberry plants and other vegetation.

Skim ice covered puddles and everything about the morning felt crisp and full of promise. Savannah Sparrows sang from brushy perches. Somewhere down by the lake a Sandhill Crane trumpeted in brassy notes. On a morning like this, there was no telling what we might see. I tapped the bear spray in my coat pocket. We stopped often to listen and to glass patches of open tundra and hillsides. 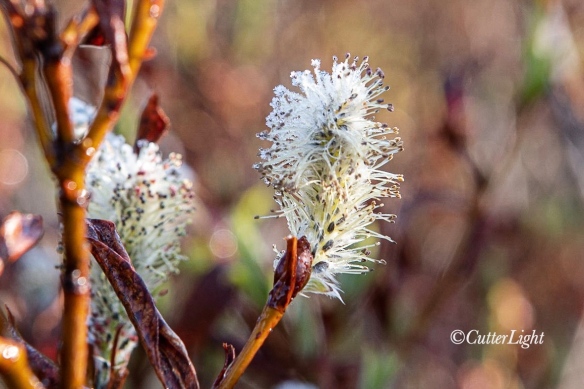 Most of the catkins were finished. In places bathed in light during these 18-hour spring days willows were leafed out in brilliant green.

As we approached Lower Pond, a pair of Black-capped Chickadees emerged from a tangle of still bare alders to look us over. A crane soared low over the path and landed somewhere out of sight. Fresh avalanche runs tongued the steep Chignik Mountain slopes, still buried in snow. When we hit the Blueberry Bog, a snipe exploded from an edge that often seems to have one of these wary, secretive birds. Mindful of not bothering a possible nest, we kept moving.

Barbra hikes into a landscape traversed by fewer than 100 living people. Clarks River lies straight ahead. The lake is to the right.

As we hiked we noted that Fireweed shoots were at the perfect stage for picking. We’d brought along a small bag to gather some on the way back to add to the evening’s teriyaki salmon stir-fry.

Wildlife tracks ran all along the beach, their number and variety increasing the closer we got to the river. Seldom seen, wolves are always around, as this track attests.

One for the books, this is the largest Brown Bear track we’ve ever come across. With males routinely topping 1,000 pounds and sometimes exceeding a standing height of 9 feet, Chignik’s bears are among the world’s largest, rivaling those of Kodiak Island in size. An abundance of salmon makes for a healthy bear population – and a healthy ecosystem in general. Barbra’s sunglasses measure 5¾ inches from temple to temple.

In addition to lots of fox tracks, two sets of wolf tracks and several sets of bear tracks, it was evident that a troupe of River Otters had recently been through the area. Though it was mostly quiet under the mid-morning sun, a Red-throated Grebe rested out on the lake, and along the far shore we could just make out Scaup, a Red-breasted Merganser and a few Common Goldeneyes. Savannah Sparrows sang and flitted from bush to bush and as we approached the mouth of Clarks, a yellowlegs or perhaps a Wandering Tattler took off up the river. 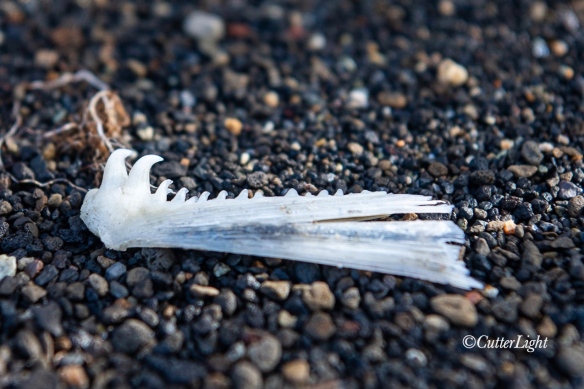 The remains of a feast, this bleached piece of Red Salmon jaw was a reminder of last fall when the banks of Clarks were trampled down into a bear highway and the shores and shallows were carpeted with spawned-out Sockeyes and Silvers.

We paused to let our eyes search a pool below a beaver dam in a small tributary before Clarks, recalling a fall when we’d seen it stacked with maybe a thousand Coho Salmon. The beavers, like those salmon, are long gone. Tiny salmon fry and parr darted through the pool in tight schools, the parr occasionally rising to take a midge off the water’s surface. Around the pool’s edge, the first light pink salmonberry blossoms were opening.

Clarks River forks just before it debauches into the lake. This is the lower, quieter piece of water. In late summer and fall, tens of thousands of salmon ascend this cold, snow-fed river.

We found a warm spot in the sun on the sandy beach, made a makeshift picnic blanket of my coat amidst otter tracks, and had lunch. Magpies chattered from a distance as we scarfed down trail mix and reminisced about the fine fly-fishing we’d had at the mouth of this river for bright Silvers. You never stop scanning for bears when you’re out here, and of course there are the wolves. The salmon will return soon, new birds are steadily filling the landscape and there’s the prospect of getting that gargantuan Brown Bear in the view finder of one of our cameras – so many incentives to get out into this country to look around.