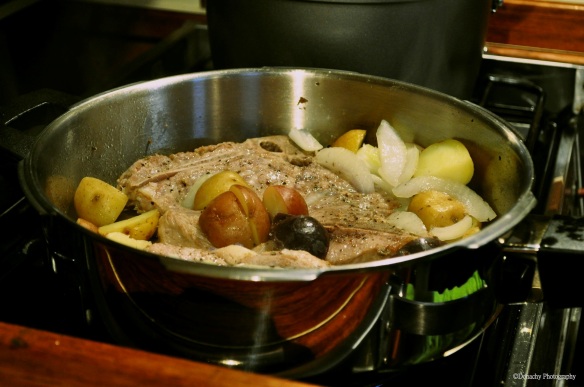 Pressure cooking is new to us, but we’re fast becoming converts. We made this one-pot-meal of two large pork chops, Peruvian potatoes and onions in about half the time the same meal would have taken in frying pan. In addition to cutting cooking time, pressure cooking requires less fuel than traditional methods.

Our first foray into pressure cooking involved one of our breakfast staples: steel cut oats. This is a new food for us, and now that we know what they are, it’s been a little tough to go back to quick rolled oats. But the time required is a deal-breaker on workdays. From start to finish, it takes about 35 minutes to cook up a couple servings of steel cut oats.

Enter the pressure cooker. These are not at all like crock pots or slow cookers – just the opposite. By sealing in steam pressure, these pans and pots speed up cooking time. As pressure rises, so does heat inside the pan. After some trial and error, I now have the preparation time for steel cut oats cut down to 17 minutes – and I think I may be able to bring the time down even further. Not only is the time cut in half, so is fuel consumption. Once the cooker is pressurized, the cooking flame can be cut back to low or even turned off altogether for up to 70% fuel savings over traditional cooking methods.

Also, since very little steam escapes during the cooking process, less water is required. This could prove to be valuable when sailing or boondocking. Less oil or cooking fat is required, too, and cooked under pressure, meats and certain vegetables that can be a little tough come out tender without being overcooked.

Years ago, I had heard that pressure cooking could be dangerous. Makes sense: hot steam, very high temperatures, pressure. I had an image of pan lids rocketing through kitchen ceilings. But whatever the risks involved with this cooking method may have been in the past, modern pressure cookers have addressed them. We purchased a two-and-a-half quart pan made by Kuhn Rikon, a Swiss company known for quality cookware. Engineered with safety in mind, the pan is made from heavy gauge stainless steel and features multiple pressure release systems to prevent over-pressurizing.

The real test came the other night when I attempted a one-pan meal for the two of us. I had two nice pork chops, some small red, white and purple Peruvian potatoes, and half a sweet onion chopped coarse. I seasoned all this with good old salt and pepper, heated a little olive oil over high heat in the pressure cooker, browned the chops for a minute on each side and then added a quarter cup of water (for steam). Then the potatoes and onions went in, I locked the lid in place, and…

Seven minutes later we had a beautifully cooked meal. The meat was cooked through and juicy, the potatoes were just right, and we had just one pan to clean up! (And nothing was stuck to the pan.)

The meat lacked the crispy outer texture straight pan-fyring gives, but searing the meat prior to pressurizing it seemed to seal it well enough. Once pressure had built in the pan, I was able to lower the flame to low and then to turn off the heat altogether, so I’m guessing I used only two-thirds to one-half the propane I’d have used had I prepared the meal in a frying pan.