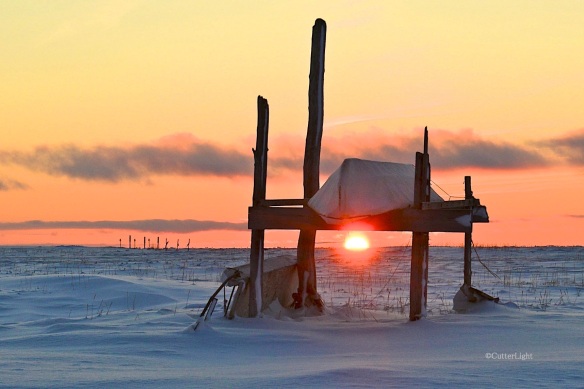 November 29, 12:46 p.m.: Framed below a seal skin umiak whaling boat, the sun edged itself above the southern horizon and lingered for just two hours and 24 minutes. On December 7, the sun will stay below the horizon and remain there for 28 days.

In 1958, under the direction of Edward Teller, the U.S. Atomic Energy Commission (AEC) devised a plan to detonate a series of nuclear devices 160 times the force of the bomb dropped on Hiroshima. These bombs were to be exploded just 30 miles southwest of the Inupiat village of Point Hope, Alaska. Teller’s plan – if an action so dangerous and misguided can even be called such – was to blast out a harbor in this far north coastline. The United States government didn’t bother to tell the local residents of this scheme. Nor did they take into consideration that the land in question dId not belong to the United States government; it was and still is sovereign Inupiat territory. 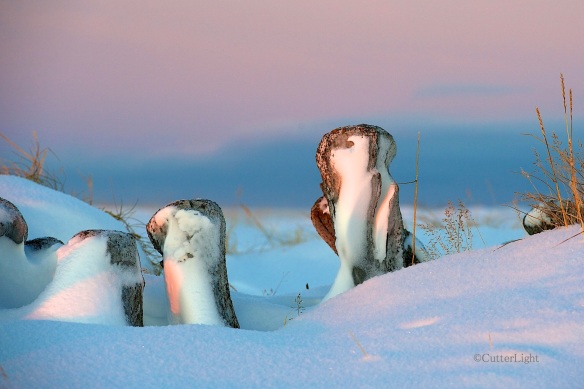 Whale bones mark a sod igloo buried in snow in the ghost town of Old Tikigaq, which was abandoned in the mid 1970’s. Although the sun is only in the sky briefly in November, it is a glorious time of year. This is the November light we have been waiting for.

A caribou hunting party stumbled across AEC engineers and para-military personnel encamped at the mouth of Ogoturuk Creek, near Cape Thompson. That’s when the questions and the lies began. 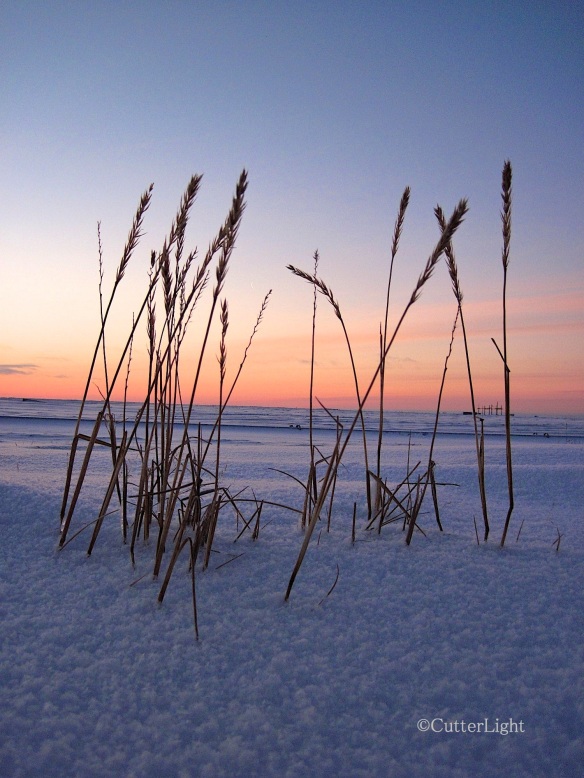 Grass silhouetted against the southern sky just before dawn, the frozen sea stretching to the horizon near Point Hope, Alaska.

In the end, Teller’s heartless plan was stopped. The bombs were never detonated. The experiment to determine how much radiation local flora, fauna and humans could survive was never carried out.

This is a story of heroes. There was Howard Rock, the co-founder of the Tundra Times, a highly educated, literate Inupiat leader who wrote the first, insistent letters to the United States government demanding that this plan be immediately halted. There were the white scientists from the University of Fairbanks, Pruitt and Viereck, who raised their voices against the project, and in standing up for the Inupiat people and standing against the government were fired by University President, William Wood, who played a less noble role in this story. There were the millions of citizens in the United States and all over the world who were in the streets, protesting nuclear tests of this kind. And there are the people of Point Hope who stood up to the government then and who are still fighting to force the United States government to tell the whole story of Project Chariot.

Because this story is not over. 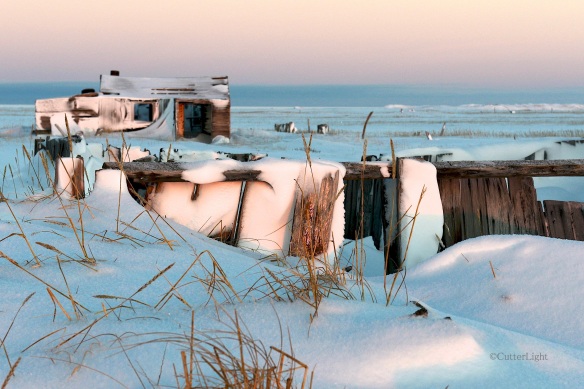 Over time, as erosion steadily ate away the finger of land jutting into the Chukchi Sea, the old town had to be abandoned. This fall, the entire area was inundated with water when high winds and hurricane force gusts pushed sea water over the rock sea wall protecting the north side of the point.

Although Teller lost his bid to detonate the world’s most destructive arms, in what feels like a tit-for-tat payback, under his direction, in secret, another group of engineers and military personnel were dispatched to the Project Chariot site. This time, they spread radioactive waste on the ground and in the stream. And they buried something there. Something in large, sealed drums.

To this day, the United States government has refused to divulge what was buried.

Since that time, the incidence of cancer has been higher than the national norm among the people of Point Hope. Higher than it should be, even taking into consideration other factors. These are some of the best people we’ve ever had the honor to be associated with. Kind, generous, resourceful, resilient, tough. Their government owes them answers. 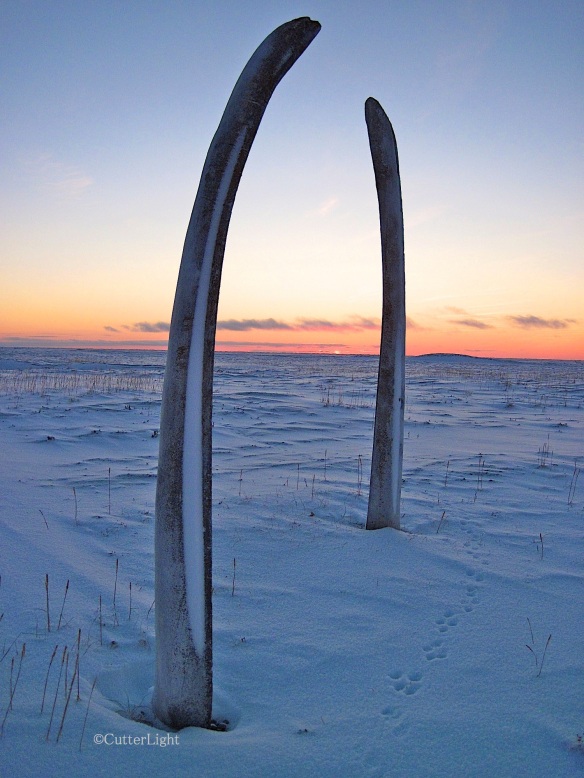 Tell-tale tracks leave evidence that an Arctic fox was patrolling Old Tikigaq just before we hiked out. These whale bone jaws located near the airstrip a mile and a half from town welcome visitors to Point Hope. The area around Point Hope is one of the oldest continuously inhabited places in the Americas – maybe the oldest. While many Inupiat (Eskimo) cultures were nomadic, here the animals came to the people. The point of Point Hope formerly extended far to the west out into the Chukchi sea, bringing the land in close proximity to migratory paths of seals, whales, walruses, char, salmon and other fish. Two impressive capes, Thompson to the south, Lisburne to the north, are home to tens of thousands of sea birds. To the east, Point Hope is situated near the migratory route of thousands of caribou. The sea and the land are the garden that has sustained people here for thousands of years.

For more about Project Chariot, see the book The Firecracker Boys by Dan O’Neill. And although it is difficult to obtain a copy, there is an excellent, 73-minute documentary film titled Project Chariot, copyrighted 2013 NSBSD & Naninaaq Productions: UNCIVILIZED FILMS. 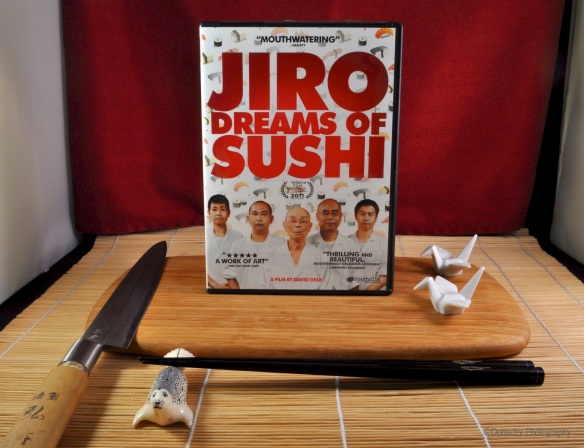 The shots of sushi will wow you. Segments depicting 85-year-old Jiro Ono magically transforming rice and fish into pieces of art that are at once too beautiful to be eaten and yet must be eaten will mesmerize you. The manner in which he and his 51-year-old son run Sukiayabashi Jiro, a 10-seat sushi restaurant in the underground subway system in Tokyo’s ritzy Ginza District will, perhaps, prompt you to make subtle (or not so subtle) changes in the way you run your own kitchen. At the very least, you are likely to come away from the film with a heightened appreciation of tamagoyaki – the grilled egg dish frequently served on nigiri sushi menus. Sukiabashi Jiro is the only sushi restaurant in the world to earn Michelin’s top rating – the coveted three stars. The simple definition of a three-star restaurant is this: a restaurant that by itself makes a trip to that country worthwhile.

As a self-taught chef, as a father, as a person who is seeking to perfect my own path in life, and as one who lived in Japan for nine years and came to deeply appreciate the Japanese sensibility toward life, this film profoundly moved me. Jiro Ono embodies the characteristics of the shokunin – a master craftsman or artisan who, while possessing superb technical skills in his field, is also aware of his responsibility to model an honorable life and to look out for the welfare of others. In the film, Masahiro Yamamoto, one of Japan’s leading food critics,  identifies the five attributes of a great chef. These attributes are no doubt valued by all shokunin.

1. A serious attitude toward one’s work

2. Aspiration to improve – to strive for perfection

3. Cleanliness (which includes a proper order in one’s life and work)

4. Lead rather than collaborate

5. Bring passion to one’s work, (and through that passion to discover moments of ecstasy)

I’m going to add a sixth element to Yamamoto’s list. If Jiro’s life is about striving for perfection, the question is begged, “Perfection to what end?” To what purpose are the above five attributes?

Some of these attributes are, perhaps, antithetical to current western thinking. Therein lies the core of the criticisms of this film. Aren’t we supposed to value collaboration? Is the emphasis on cleanliness really so important? Is Jiro truly interested in others, or is he merely a shallow, self-inflated ego with no meaningful connection to other human beings – including his wife and his two sons? Doesn’t taking one’s work too seriously lead to imbalance in life?

I think this much is fair to observe: The path Jiro Ono has chosen in life is not a path that would suit everyone. But it is a path I admire. In the director’s cut, it is mentioned that a regret is that Jiro’s wife was unable to be in the film. This seems to be owing to the health of a woman in her 80’s, not about a failed partnership. His sons are both key players in the film, and speak of their father with honor, respect and love. They have both chosen to follow in his line of work, to embrace his teaching and have become highly respected sushi chefs in their own right. In turn, Jiro speaks with pride and admiration of both of his sons. As a father, I can very much relate to Jiro’s philosophy regarding child-rearing. You spend your life teaching and guiding, and in the end you hope a good bit of it takes root. In both of Jiro’s sons, his teaching did stick, his guidance payed off, and because his sons worked for many years in his restaurant, he ultimately spent more time with them than most fathers ever spend with their children.

As to taking one’s work too seriously and carving out one’s own path rather than collaborating, I grew up in a family wherein, not just in my nuclear family but in all the uncles and aunts in my extended family, the life philosophy most frequently espoused was an admonition to not take work (or anything else) too seriously. It was a philosophy that did not work for me, and ultimately inspired an opposing philosophy.

At the age of 4o, I began the long, sometimes arduous, deeply satisfying process of remaking my life. Part of the remaking has been rooted in a newfound freedom – a self-given permission to pursue life with renewed passion, dedication and a commitment to honor and excellence.  As I move forward with this life as a sailor, chef, writer, photographer, father and husband, this film that so eloquently captures the life and spirt of a true shokunin resonates.