We were on the ice mostly to have a look and get a photo or two, but when I was offered a turn at fishing… how could I say “No?” It didn’t take long to put a pan-sized rainbow on ice. It took me back to being a kid on Pennsylvania’s Clarion River trying to get a few tasty perch for a wintertime fish-fry.

From an upstairs window, we could see the anglers begin to gather across the river. “Let’s go see what they’re up to!” It’s about a quarter mile walk to the river from our place and another three-quarters of a mile across the frozen water. No worries. The ice is over two feet thick. 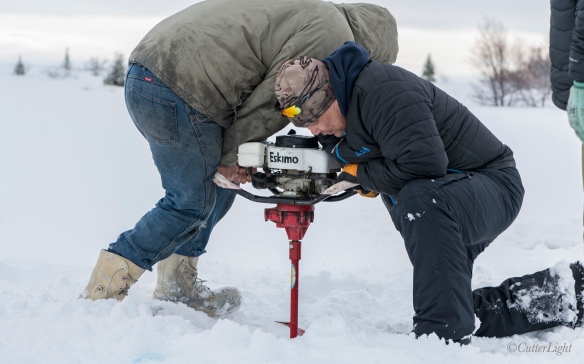 Ray Wassillie had organized the gathering and brought along the power ice auger. Now we want one! Between the Newhalen River and local lakes, there is an abundance of wintertime quarry: Northern Pike, Lake Trout, Dolly Varden Char, Rainbow Trout, Grayling and Burbot!

We’re both battling colds and therefore didn’t hang around long. The fishing was just starting to heat up as we were leaving and I really wanted a shot of someone pulling in a decent fish. This woman had the hot hand, so I kept my camera trained on her. Of course, that put the jinx on her. After a lull that seemed to last forever, she finally had a bite… and pulled out this tiddler! Some of the fish were pushing 20 inches… guess you’ll have to take our word for it.

In addition to a “Big Fish” contest, there was a side event to see who could chop through 30 inches of hard ice the old fashioned way – with a steel pike. Up from New York on a student teaching stint, Griffin was game. Talk about work though. I think he sufficiently had the “idea” of it by the time he got a foot or so into it and wisely put the pike aside to get back to fishing.

I had not intended to fish, but when Ray offered a line, what could I say? My first fish through the ice in… geez, over 40 years. As it is with any addiction, I should have known not even to unscrew the cap from the bottle. We’re now shopping ice augers!