Reading John J. Audubon’s accounts of his journeys throughout the United States in search of every species of bird for his paintings, I’m always charmed by his portraits of communities and their abundant bird nesting boxes.

“Almost every Country tavern has a Martin box on the upper part of its signboard;” he wrote of 1840’s America, “and I have observed that the handsomer the box, the better does the inn generally prove to be.”

The prevalence of hollow gourds fashioned with holes and used as nesting sites in Native American villages is also well documented. Apparently the symbiotic relationship between swallows and humans goes back a long time and cuts across cultures. Virtually everyone seems to love these harbingers of spring, their artistic mastery of the air, and the serious damage they do to mosquito populations and to other annoying insects.

And so it is here in Chignik Lake. Upon moving here we were struck by the numerous swallow nesting boxes situated on posts, nailed to utility poles and affixed to buildings throughout the village. Here we have mostly Tree Swallows along with occasional Violet-green Swallows. In the absence of invasive species such as House Sparrows and Starlings – which take over nesting boxes -, and with a lake featuring copious hatches of midges and other insects, this is a perfect place for swallows to rear a brood of chicks. Magpies can be a scourge, so it’s important that nesting boxes not feature any sort of perch to allow them to access the eggs and chicks, but other than our Merlins, there are essentially no other serious threats to the swallows of Chignik Lake.

The major factor limiting the number of swallows Chignik Lake can accommodate is… accommodations. So this spring we did our part to help these birds out by putting up four new cedar nesting boxes. The first Tree Swallows showed up sometime around May 9, and the early birds have already begun choosing nesting sites. Our boxes may have gone up a bit late for this year’s birds, but after they’ve weathered for a year and the swallows have had an opportunity to check them out, we’re hopeful they’ll attract these welcome summer visitors in future years. 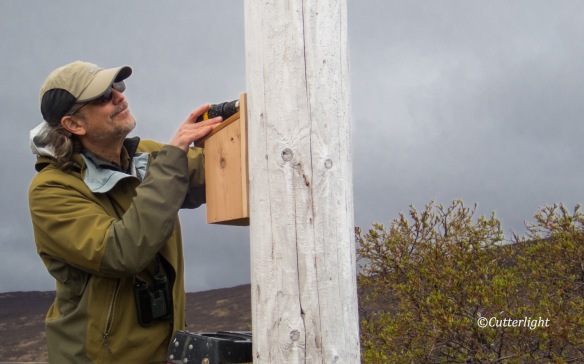 Location, location, location. High enough up, away from occupied buildings and busy roads, near a lake chock full of bugs, and a pesticide & herbicide-free environment. Heck, if we were Tree Swallows, we’d spend our summers here!

If you’d like to put up swallow nesting boxes in your area: