Words such as “common,” “uncommon” and “rare” can be vexingly imprecise. So, what are the chances of seeing a Common Loon on Chignik Lake? Generally pretty good, which prompts the question: Have Common Loons – which David Narver recorded us “uncommon” back in the early ’60’s – become more common on The Lake in recent years? And if so, does that explain the relative absence of the smaller Red-throated Loon – which Narver reported as “common?” I love questions like this, even if the answers are tough to know.

These Commons appeared to be cooperatively feeding as they worked their way along the shoreline. (Chignik Lake, January 14, 2018)

We encountered Common Loons with some frequency – as individuals, in pairs, and at times in what appeared to be family groups of four or five. Commons’ diets are comprised mainly of small fish – lots and lots of them. According the Cornell Lab of Ornithology, a pair with two chicks can consume about half a ton over a 15-week period. Unlike River Otters, mergansers and goldeneyes, Commons usually swallow their prey underwater. I was therefore unable to observe what species of fish they might be targeting. Sticklebacks, small char and juvenile salmon are all likely candidates. The system also holds populations of smelt and sculpins. 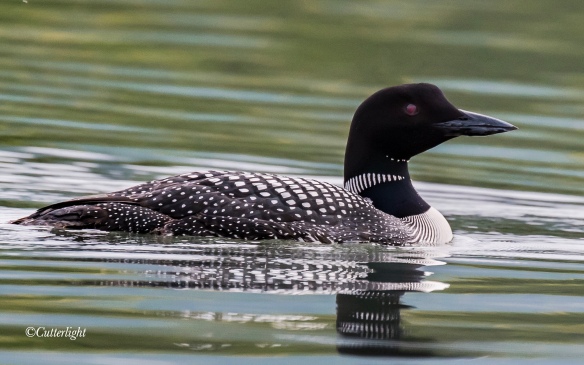 Right down to it’s gem-like eye and armed with a serious bill, Common Loons surely rank as one of North America’s most striking birds. (Chignik Lake, August 17, 2018)

Common Loon Range Map: with permission from The Cornell Lab of Ornithology, Birds of the World

Common Loon Gavia Immer
Order: Gaviiformes
Gavia: sea mew
immer: perhaps from the Latin immergo – to immerse; or from the Swedish immer – which refers to the ashes of a fire and suggesting the loon’s coloration