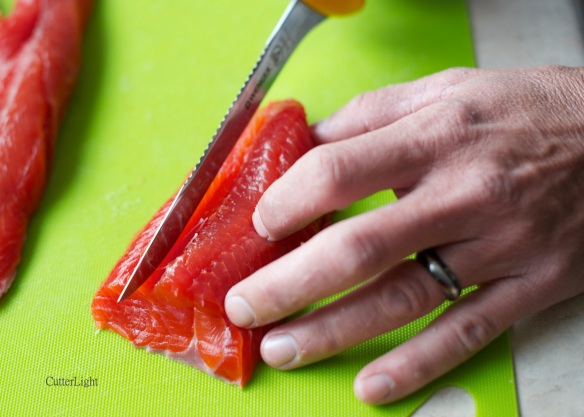 Above: Removing the pin bones from a Sockeye fillet. Of the eight species of Pacific salmon, Sockeye (red salmon) have the firmest flesh and are second only to Chinook in terms of fat content. These attributes make them a perfect choice for sashimi or seared tataki.

Among Pacific salmon, there is a direct correlation between how far each species travels and how much fat or oil the meat contains. Chinook, which may run 100’s of miles up natal rivers, have meat so laced with fat eating a piece of an upriver bright can be akin to letting a piece of of light, fresh, creamery butter melt in your mouth. While sockeye aren’t quite that fatty, their relatively long spawning runs during which they don’t feed necessitate ample amounts of stored fat. Bluebacks (another name for Sockeye) have rich, oily meat – self-basting on the grill and ideal for sashimi. 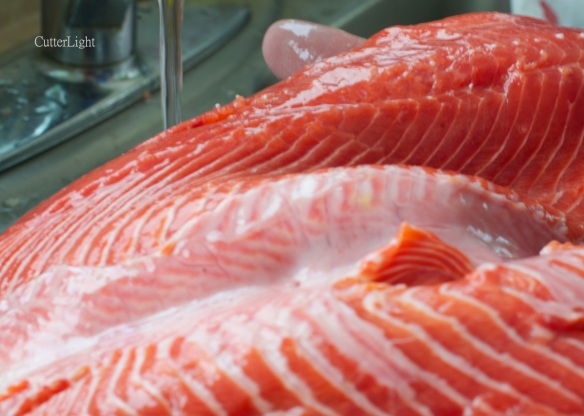 The term “Sockeye” is derived from similar sounding native American words meaning “red” – which is both the color of sockeye meat and the color they take on during their spawning run. The fillets are beautiful, and given the relative abundance of wild Sockeye and their generally reasonable market price, it’s puzzling that they aren’t utilized more often by sushi restaurants. Unfortunately, most sushi restaurants serve farmed Atlantic salmon – a bland substitute for wild fish.

Butterfly-filleted, seasoned with salt and pepper, and ready for the grill this ocean-caught king salmon (Chinook) shows this species’ characteristic orange color.

Since producers are permitted to dye farmed Atlantic salmon to match the color of wild fish, looks alone are not always a good way to determine whether or not you’re making a sustainable choice when you purchase a piece of salmon at the market or order salmon at a sushi-ya or other restaurant. Look and ask.  If the menu merely says “salmon,” it’s a sure bet the product came from a farm. Wild Chinook are highly prized and command a higher price than farmed fish; therefore anyone selling wild kings is going to accurately label them as such. The meat of sockeye has a distinctive red coloration and is noticeably firmer than that of other species. Sockeye, too, are highly prized and are almost certain to be accurately labeled.

The upper part of Sockeye fillets, the back meat, is beautifully colored and wonderfully firm.

Sockeye are primarily filter feeders. They have more gill rakers than other salmon, and these gill rakers help them sift out small crustaceans such as krill. These crustaceans are rich in carotene which give red salmon their red color. Krill are also loaded with oil, giving Sockeye their rich, oily flavor. 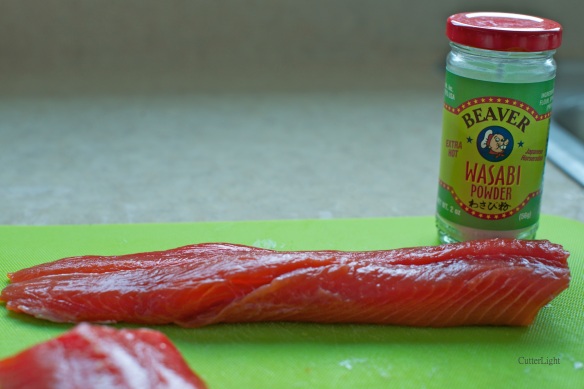 A sashimi-grade Sockeye fillet fresh from Alaska’s famed Copper River is ready to be sliced into thin, bite-sized pieces and dipped in soy sauce with just a hint of wasabi. Enjoy with a favorite craft beer, a good daiginjo sake, or a lightly-chilled Chablis. *We strongly advise readers to freeze salmon and other fish for at least 24 hours before serving raw in order to kill parasites.