“I feel pretty – Oh, so pretty – That the city should give me its key – A committee – Should be organized to honor me – la la la la.”

I have a board in my kitchen where I post culinary ideas. Sometimes they’re inspired by an ingredient. Often the spark is drawn from a photo or even just the name of a recipe. Several weeks ago, I saw a “blueberry meringue pie.” Hmmm… I never thought of a blueberry version of a favorite pie. What a great idea! My ruminations took my mind through several possibilities – a pie for two, blueberry filling with a vanilla-flavored toasted top, an entirely blue pie, a crustless version…

Then I saw a photo online of a gorgeous, bright lime green soufflé encased in toasted meringue. That was the catalyst for what turned out to be essentially a scaled down crustless blueberry meringue pie.

So, how did it turn out?

As you can see, the toasted meringue provides for an eye-popping presentation. When sliced, layers of fluffy vanilla meringue and an airy purple-blue center are revealed. And the texture and flavor? Delicate yet creamy, sweet-tooth satisfying, with flavors of tropical coconut, toasted marshmallow and wonderfully intense wild Alaska blueberry. This dessert was as satisfying as a culinary achievement as it was to demolish – which we did in a gratifyingly indulgent blink of an eye. 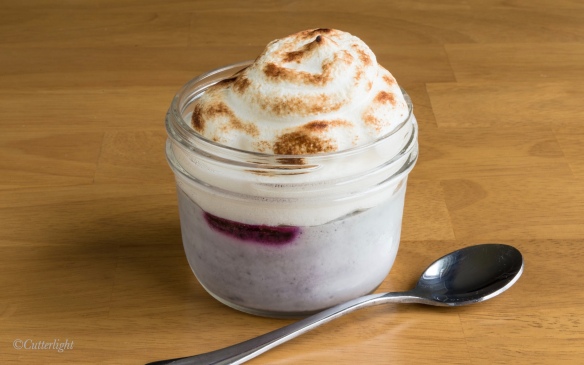 You, too, can whip up (pun definitely intended) this five-star dessert. For the sake of making this scrumptious dish accessible to all levels of chefs, I’m writing up the directions for a mason jar version. If you are interested in the more difficult cloud-on-a-plate version, leave me a comment or message me and I’ll send that recipe to you.

Ingredients for Blueberry Coconut Custard Base

Directions for Blueberry Coconut Custard Base

Directions for Meringue Top and Assembly

*You can make blueberry juice by taking about a cup of blueberries and an ounce of water and simmering for about ten minutes. Using a potato masher, smash the berries. Place mixture in a cheesecloth-lined wire-mesh strainer and let the juice drip through. To keep the juice clear, do not squeeze the cheesecloth.