The dancers in this short video are 6th grade students at Tikigaq School in Point Hope, Alaska, an Inupiat village 200 miles above the Arctic Circle. They are performing traditional songs and dances, passed down through the generations, sung in their native language.

The annual school Christmas program in Point Hope is a little different than in most communities. Yes, there are seasonally popular songs and carols, but many of them are sung in Inupiaq, the language of the Tikigaqmuit, the Inupiat Eskimo people of this small whaling community on the edge of the Chukchi Sea. There is also lots of drumming, singing and dancing performed according to traditions that extend back in time beyond memory. The drums – which resonate much more loudly than one might suspect them capable of at first glance – are made from material such as the membrane of sea mammal organs stretched over wooden frames. The beautiful mukluks (boots) many of the participants wear are hand sewn from seal, caribou, beaver and other natural materials.

The dances celebrate the past and the present. Aaka Irma (Irma Hunnicutt), who volunteered her time to come to our school and teach the students these dances, has an honored place as an elder in this village. Although the students speak mainly English in their day-to-day lives, these celebrations give them the opportunity to honor their language and heritage. This is a place where traditions are still passed down generation to generation; where some of the clothing and much of the food is still provided by the surrounding land and sea; where traditions are alive and vibrant and honored.

On this occasion, the students and Aaka Irma invited their classroom teacher to dance with them.

Fashioned from polar bear fur and finished with intricate beading, this Inupiat yo-yo has transcended it’s traditional purpose to become art. Based on a bola design, in olden times tools like this were made of rocks tethered together with sinew and were used to catch birds.

Beautifully crafted by Molly Oktollik, one of the elders here in the village of Point Hope, Alaska, this Inupiat “yo-yo” isn’t what most of us envision when we hear the word yo-yo. In former times, they were made of rocks held fast on sinew tethers and in the right hands were a formidable tool for catching birds. Ptarmigan, for one species, are often easy to get close to, and ducks and sea birds returning to their headland roosts typically fly in on a low trajectory.

These days yo-yos are crafted as pieces of art, or, when less elaborate, as toys. It takes a certain skill, but the two ends can be made to rotate in opposite directions – that is, with one end revolving around the center handle clockwise, and the other revolving counterclockwise. It’s a pretty cool trick if you can get it to work.

The rhythms are played on traditionally-crafted drums; the dances have been passed down from generation to generation. These fifth graders demonstrate that Inupiat traditions are alive and well in Point Hope, Alaska.

With the help of village elder Aaka Irma, my fifth graders and I learned an old Point Hope Eskimo dance that hadn’t been performed in some time. Under the guidance of our Inupiat language teacher, Aana Lane, the students also practiced popular traditional Point Hope dances. The students performed these dances for the Christmas presentation last month to an enthusiastic crowd.

The group of students I have this year is very connected to their culture and heritage, particularly when it comes to dancing. It’s amazing to see every student in the class become so completely engaged in a cultural tradition. During their performance in December, the students captivated the entire audience. The performance culminated with the students inviting one and all to join them on the gym floor in the closing Common Dance – a dance familiar to virtually everyone in our village.

Hand stitched ugruk (bearded seal) skins cover the wooden ribs of this traditionally-crafted boat as it sits atop a rack in Point Hope, Alaska. With spring officially here (the Vernal Equinox was March 20), whaling season has begun. Whaling crews have been going out to break trail these past few days. This is rough going across the frozen, buckled landscape of the Arctic Ocean.

Each Arctic day is lengthening by eight minutes, and the sun is shining with perceptible warmth as months of negative double digit cold gradually give way to highs approaching an even zero degrees Fahrenheit. Although the seas continue to be locked up tight, that is how it should be this time of year. Once the trail is broken, the village’s two whaling crews will set up their camps far out on the ice near open water, where, with boats stitched together from the skins of bearded seals at the ready, men dressed in warm, white parkas will wait and watch. 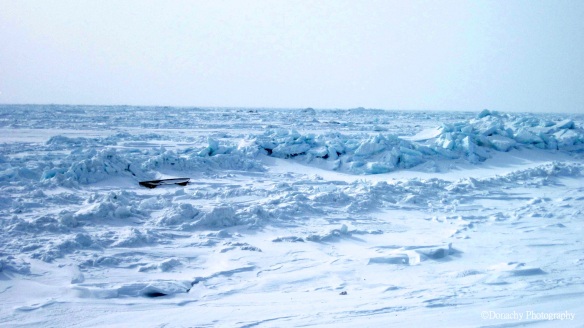 A small skiff seems to await the Chukchi Sea’s thaw.

Last year, three whales gave themselves to the village. That is the way people here say it. Animals are not “killed.” They give themselves, and for a whale to give itself, the hunters’ skill, preparation and worthiness must all come together. Point Hope is one of the oldest continuously inhabited settlements in the Americas. Perhaps the oldest. Here, the unique interplay of sea and river, hills and tundra bring salmon, char, seabirds, caribou, whales and even berries to the inhabitants. Compared to many other villages, the people of Tikigaq (Crooked Finger – so named for a narrow thrust of land at the tip of the peninsula that long since eroded away) have seldom had to go far for food.

The whales are bowheads, a right whale. These baleen whales may weigh 30 tons or more. Occasionally ivory, slate and jade harpoon heads of old are discovered buried deep in a whale’s blubber, indicating that they have a lifespan of at least 150 years. Although commercial whaling in the 1800’s pushed populations to near extinction, they have gradually recovered and numbers in the Chukchi Sea continue to grow by about 3% each year to over 10,000 currently.

Inuit artist Kenojuak Ashevak’s painting (above) depicts the circle of Arctic seasons. Her painting shows open water for less than half of the year.

When we leave the village in mid-May to spend our summer further south in Alaska, much of the tundra and the Chukchi Sea will still be locked in ice. When we return in mid-August, the tundra will be carpeted in shades of green, some of it already giving way to Autumn’s gold. In high summer, flowers bloom in profusion, but by August, most will be done. Berries – cloudberries, cranberries and crowberries near the village, joined by blueberries further out – will follow. Waves will tumble on the shore as though the ice never existed, and salmon and char will be swimming in the clear-green water.