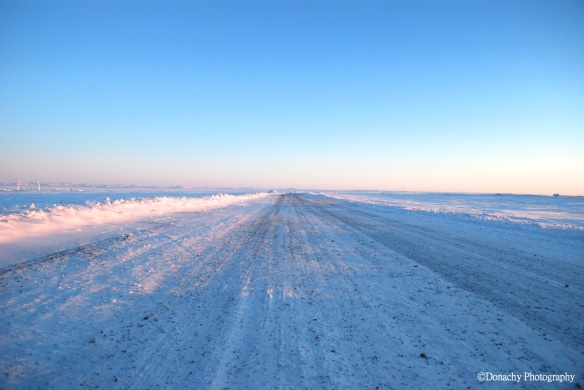 7 Mile Road pictured above is one of our Arctic “rave runs.” Our other choice is running along the frozen shore of the Arctic Ocean. Brrr!

Before moving to Alaska, Jack and I took part in about three “destination” half marathons each year. These runs took us to places such as California’s wine country, San Diego and vicinity, and the coastal redwood forests of northern California. But it’s now been two-and-a-half years since our last half marathon–the Salmon Festival Half Marathon in Cordova, Alaska in the summer of 2009. After that first visit to Alaska, our life became consumed with moving up here. Then, when we moved to Shishmaref, we managed to sit on our rear ends for the majority of the school year. We were painfully reminded of our lack of exercise during an embarrassing mile-and-a-half walk from the Nome airport into Nome last spring which was way more taxing than it should have been.

Fast forward to the present.

We both really enjoy the challenge of half marathons, a race just long enough to be physically challenging and mentally rewarding without being so long that the preparation consumes our lives or we’re left feeling overly whipped after the event. Aside from running halfs, our secondary goal has always been to stay fit enough that we are able to run five miles at the drop of a hat, or take off on a reasonably strenuous hike. With those goals in mind, we vowed to make changes in our fitness regimen when we moved to Point Hope.

Prior to the start of the school year, we managed to get in a couple of runs outside. But our options in a town paved in unforgivingly hard concrete and situated on a point of land carpeted in small rocks proved to be quite limited. And then there’s the weather… Luckily our school has a decent weight room equipped with two treadmills and an elliptical trainer.

Jack used his years of running experience to draw up a running schedule for us–one that would get us back in shape quickly without risking injury. I’ve always liked having a goal event to shoot for–a road race of some kind–but our summer schedule is still up in the air, and there aren’t a lot of races up here. The event we’re most likely to take part in is the Mayor’s Marathon and Half Marathon in Anchorage on the summer solstice. Otherwise, we might get out our maps and GPS, measure off our own course, give it a name and reward ourselves with the traditional beers and t-shirts once we’ve run it!

Even with goals set and schedules printed, honestly, running on the treadmill is BORING! We’ve loaded our iPod with podcasts and music, and one of our colleagues positioned the treadmills so people can run side-by-side and talk (just like the old days when Jack and I used to run the trails along the American River in Sacramento!). I also have audio books ready to upload to help combat my new nemesis. The other challenge (and this one is kind of ironic) is that I’ve always hated to run in the heat; our weight room, kept at a constant, breezeless temperature of 70 degrees means minimum running attire and lots of water. Ugh! The tiny fans on the treadmills put out a barely perceptible stream of air.

All that being said, it’s time to pack my workout bag, make sure my iPod has my latest running playlist and get ready to pretend I’m running on a cool morning in Maui!