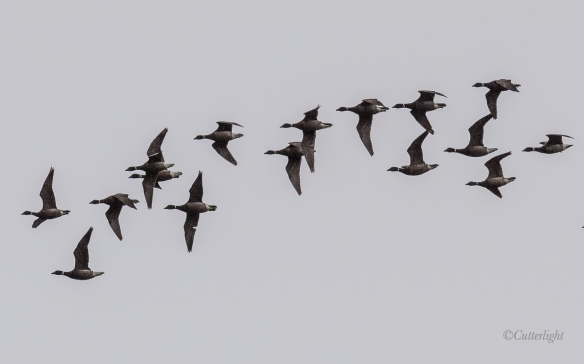 No white patch on cheek, white necklace, short bill, a constant, chatty murmur as opposed to the more distinctive honking associated with Canada and Cackling Geese… Brant!. For awhile during spring, wave upon wave of these migrants can be heard passing over The Lake. (May 5, 2018)

At The Lake, we slept with our bedroom window cracked open in all but most inclement weather. Nighttime sounds included Harbor Seals chasing down Silver Salmon, Brown Bears scavenging the beach, waves lapping the shore, hooting owls and – for a few nights in spring and fall – flocks of migrating geese.

To get a look at Chignik Lake’s migrating Brant, you need a bit of luck with timing (late April through mid May are best), clear skies or high cloud cover, and a good pair of binoculars or a long camera lens. With few exceptions, they’re up there, though David Narver reported them as “occasional” on the river. Birders seriously intent on getting a good look at this species would do well to check out Izembek National Wildlife Reserve way down at the big toe of the Alaska Peninsula. More than 90 percent of the Brant population that utilizes the Pacific flyway – along with half the world’s Emperor Geese – stop here each fall. That’s about 150,000 Brant and tens of thousands of Emperor Geese. (Note to self: go to Izembek!)

Among Brants’ favorite forage is Eel Grass. As Chignik Lagoon continues to grow more silted-in and Eel Grass beds there expand, it will be interesting to see if in the future Brant begin to utilize this area. So why, as Brant feed extensively on Eel Grass, is their specific name “bernicla” (barnacle)? It was formerly believed that certain geese were spontaneously generated from barnacles. In fact, until fairly recently the Catholic Church permitted Catholics to eat these geese on Fridays as they counted as fish. See: Wikipedia. 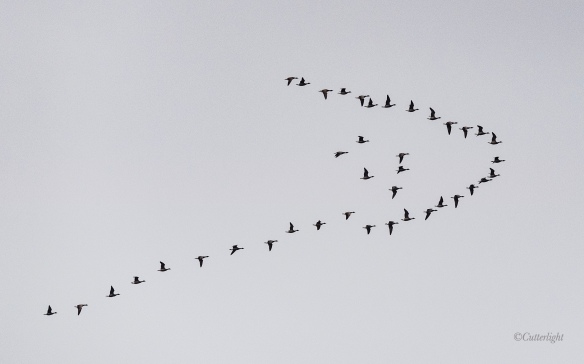 The shifting forms flocks of geese glide in and out of invite a wandering imagination. With Sockeye Salmon soon to ascent the river, these Brant seem to be pointing the way. (May 3, 2018) 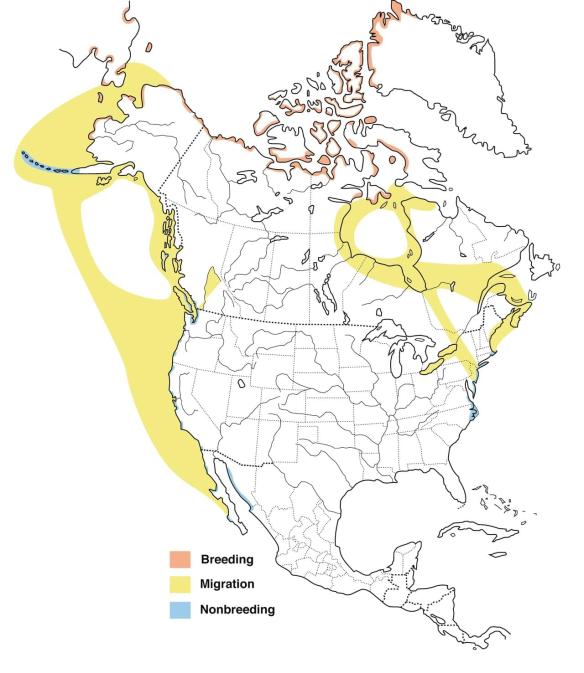 Brant Range Map: with permission from The Cornell Lab of Ornithology, Birds of the World