Newly-arrived migrant ducks gather at preferred locations on the Chignik River before dispersing to breeding grounds. These locations vary according to ice patterns. This pair of Mallards was heading for a shallow riffle where fellow Mallards, several other species of ducks, and Tundra Swans were feeding. (March 14, 2017)

The first word that comes to mind when I think of The Chignik’s Mallards is wary. Well beyond shotgun range, at the first hint of an approaching human they take off in a cacophony of alarmed quacks (females) and rasping calls (males). The second term I think of is strikingly handsome. Mallard drakes are among those birds that, if they were not so common, our jaws would drop upon encountering them.

A few over-wintering and early-arriving migrate ducks gather in an icy riffle on The Chignik. Included in this photo are Mallards, mergansers, Buffleheads, Common Goldeneyes, a pair of Ring-neckeds, a Greater Scaup Drake and a Tufted Duck. Just upriver was a group of Tundra Swans. Pintails and Green-winged Teal will soon join the party. (March 14, 2017)

“Green-heads,” they’re often called. But, as angler-biologist A.J. McClane observed, color is often an unreliable characteristic, and yet it is generally the first thing we look for. He may have been referring to attempts to differentiate among species of salmonids, but he could as easily have been referring to birds. In every on-line and in-hand field guide I have at my disposal, the descriptor for drake Mallards in breeding plumage is universally “green head.” So what are we to make of those males sporting what appear to be purple or even blue heads? Neither the Internet nor the books I have on hand offer much guidance. 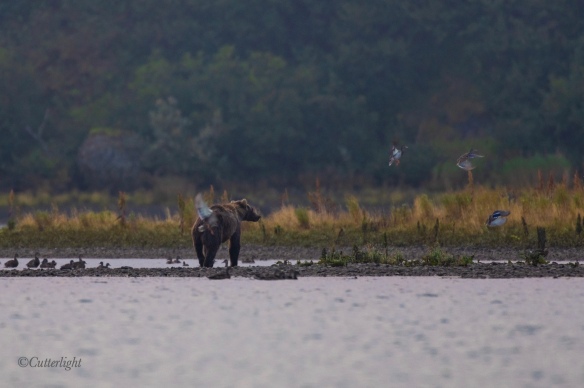 While early spring is a good time to see Mallards along with Tundra Swans on The Chignik, fall presents memorable opportunities to catch them with Brown Bears. (September 8, 2018)

However, in Birds of America1 it is noted, “Head and upper neck, glossy green with shadings of purple and deep Prussian blue.” Prussian blue is as deep and iridescent a blue as one might imagine. So, according to this text, the purples and blues we see when we look at the heads of certain drakes is part of the plumage. 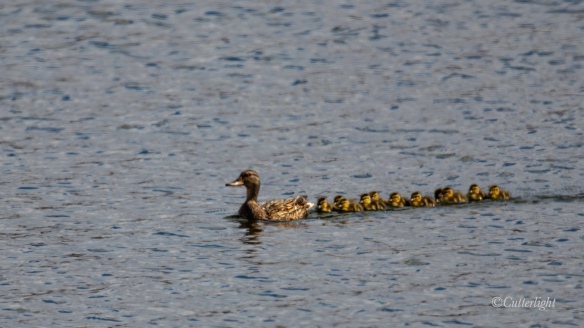 The speed with which a concerned hen can usher her young ducklings across a stretch of open water never ceases to astonish me. The Mallard hen and her brood in this photo were especially vulnerable – and they caught me quite off guard as they scooted across a patch of water in front of our home. Not wishing to add to the anxiety she was surely feeling, I snapped a quick documentation photo and let them pass. (May 15, 2019)

The apparent dominance of purple and blue in certain drakes probably has to do with some combination of natural variation among individual birds and the complicated manner in which light can play on bird plumage. Anyone who has closely watched hummingbirds has witnessed the latter as a gorget can appear to change color in a fraction of a second and may take on a range of hues. Birds themselves, it should be kept in mind, don’t see these colors quite the way we do as their eyes can pick up near ultra-violet wavelengths that humans cannot detect. 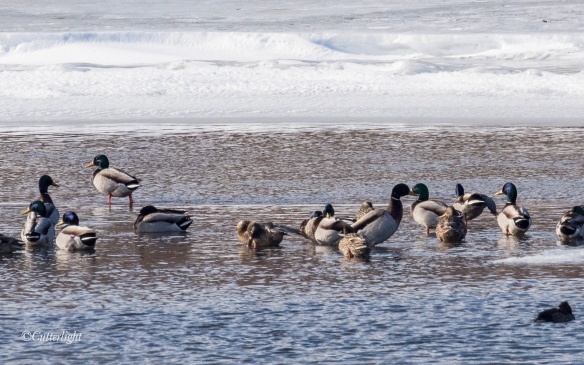 When is a Green-head not a green-head? Several of the drakes in this photo appear to have purple heads. (March 16, 2017) 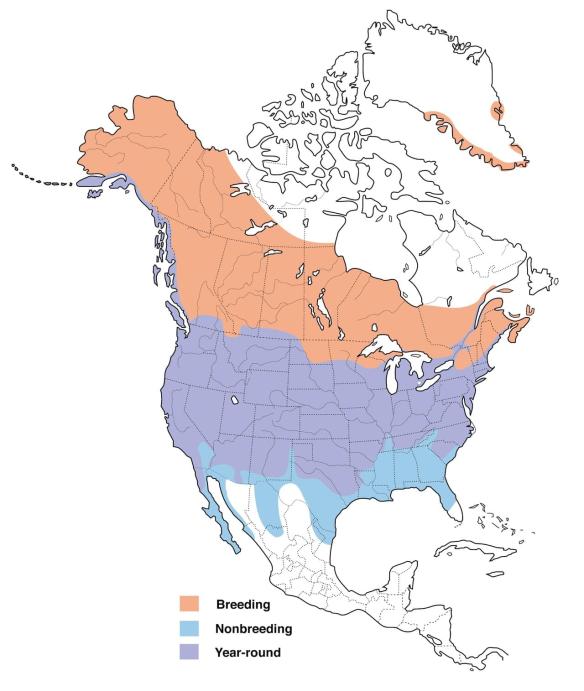 Mallard Range Map: with permission from The Cornell Lab of Ornithology, Birds of the World

Previous Article: Brant – the Goose that Was Once a Fish (sort of)