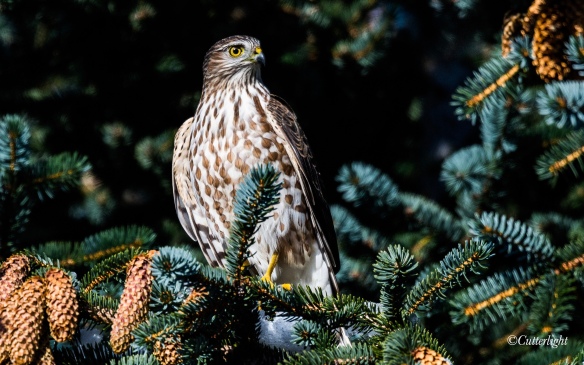 This handsome specimen occasionally hunted the grove of White Spruce trees where a variety of feeders attracted Pine Siskins, redpolls, crossbills and other passerines. That’s snow just behind his talons. (Chignik Lake, October 23, 2017)

“Tsst! Tsst!” I slowly turned to where Barbra was positioned 40 feet from where I’d set up. A subtle motion of her head directed me up into the spruce bows were a small, beautifully marked hawk was perched. I couldn’t believe how close he was. I knew I wouldn’t have more than moments in which to make a photo before I was noticed. Luckily, Barbra’s cue had drawn the bird’s attention to her, and since she was a relatively safe distance, the hawk didn’t seem to feel overly encroached upon. I swiveled the Wimberley-mounted lens toward where Barbra’s eyes were motioning, carefully tilting it up toward the bird’s perch. For almost two minutes the hawk cooperated and I was able to make some photographs. And then it was gone. The last frame I took shows only a blur of barred tail feathers.

I’d seen it before and I saw it again, but I never had another photo op like that. Focused on a newly arrived flock of Red Crossbills, I’d have missed my chance altogether had it not been for Barbra’s keen eyes. Come to think of it, it’s likely that those very same crossbills had the Sharp-shinned’s attention, tempting it to linger longer around a couple of humans than it otherwise might have. 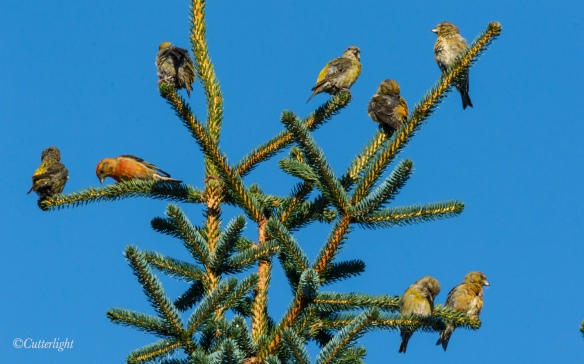 Sharp-shinned Hawks are rare enough on the Alaska Peninsula that it isn’t included as part of their territory on most range maps. If you encounter one out here, you’re fortunate. Seldom found far from forests, Sharp-shinneds on the largely treeless peninsula are most likely migrants, merely passing through. The two copses of White Spruce trees and the feeders, which attracted the song birds that are this species’ favorite prey, no doubt induced it to hang around. 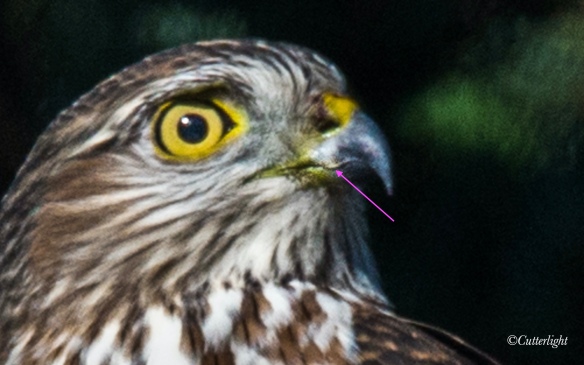 The protrusion on the upper bill of this Sharp-shinned Hawk is called a tomial tooth. It’s a trait shared by falcons, kites, and one group of songbirds, shrikes. Not actually a tooth, of course, the protrusion and the corresponding recess in the lower beak aid these predators in breaking the spines of small birds and other prey. (Chignik Lake, October 23, 2017) 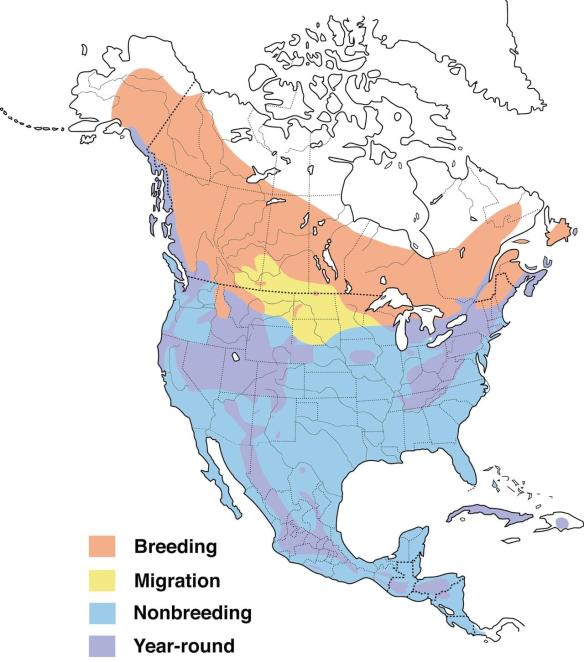 Sharp-shinned Hawk Range Map: with permission from The Cornell Lab of Ornithology, Birds of the World

Previous: Northern Harrier – Rare but There

Next Article: Rough-legged Hawk – Buteo of the Far North 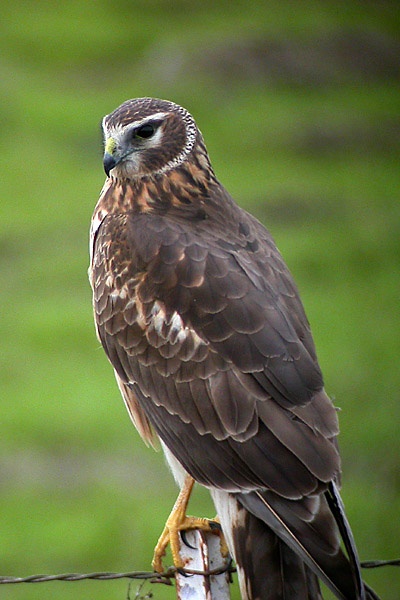 Anytime a slim, long-tailed hawk is observed hugging the terrain as it glides over grasslands, marsh and field, I instinctively think “Marsh Hawk” and go from there. This is a slender, graceful predator with a very long tail, unique even in silhouette. But it is the Harrier’s distinctive white rump that often confirms its identity. 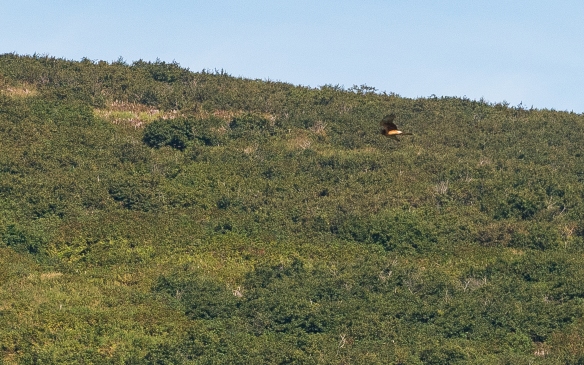 Not much of a photo, I’ll grant that. And yet with that very long tail and white rump patch, there is no doubt that this is a Northern Harrier gliding through the Chignik River valley. (August 29, 2016)

I’ve encountered Northern Harriers (formerly Marsh Hawk) in a number of states, from Florida to Oregon and north to Arctic Alaska. Although they are widespread and might be found anywhere their preferred habitat exists, they generally aren’t abundant anywhere. On the Alaska Peninsula, they’re rare, although they are known to breed out here. 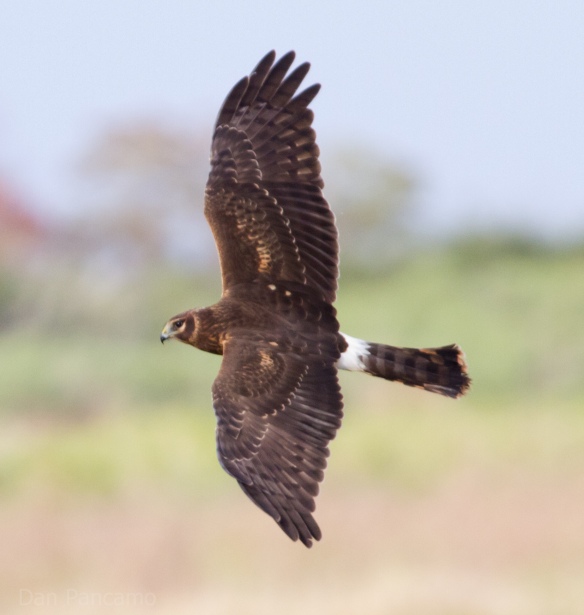 That white rump is diagnostic. Note also the almost owl-like facial disk. Like owls, Harriers rely on a keen sense off hearing to detect the small mammals, occasional birds and other animals they prey upon. (Photo Credit, Dan Pancamo, Wikipedia) 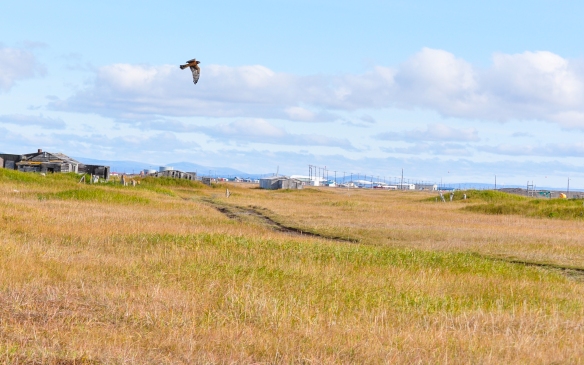 This is exactly the kind of habitat Northern Harriers prefer. I encountered this specimen near Point Hope, Alaska, an Inupiat village located 200 miles north of the Arctic Circle. This kind of terrain is a good place to make a living on voles and lemmings. (September 3, 2011) 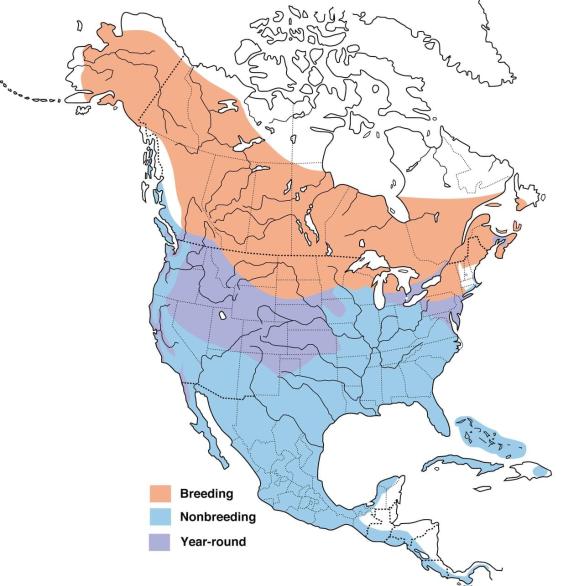 Northern Harrier Range Map: with permission from The Cornell Lab of Ornithology, Birds of the World

Next Article: Sharp-shinned Hawk – Sharp Talons and a Tomial Tooth 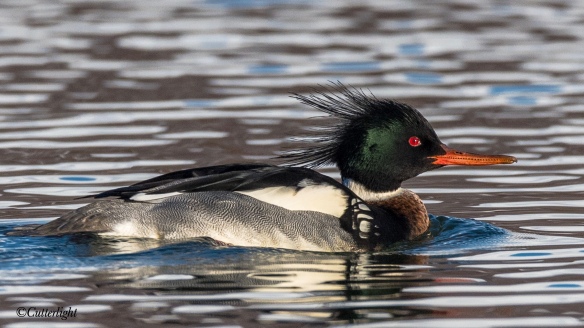 With a crest reminiscent of peacock herl and a bright red orange bill meant for the business of catching fish, Red-breasted Mergansers are both stunningly handsome and adapted for success in the Chignik Drainage. (Chignik Lake, December 31, 2016)

While there is some dispute as to the actual speed it can attain, it is said that the Red-breasted Merganser is the world’s fastest bird in level flight. That means that at speeds of somewhere in the vicinity of 80 miles per hour, while it can’t match a diving Peregrine Falcon’s break-neck 240 mph, it could outrun the predator in a flight parallel to land or water. 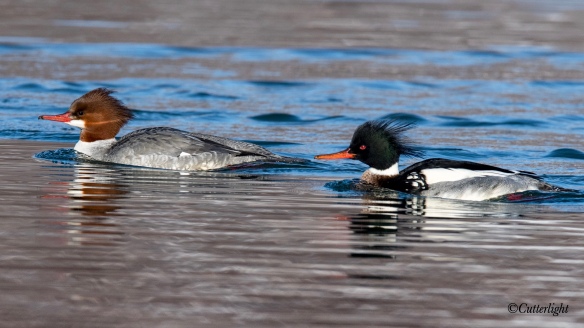 As is the case with their Common cousins, Red-breasteds generally aren’t high on hunters’ lists. Mergansers are sea ducks, most of which are not esteemed as table fare. Though I must say as a fly-tier, the drake’s plumage is tempting. Fortunately there are synthetic materials that obviate the need to take one of these beautiful ducks merely for its feathers. 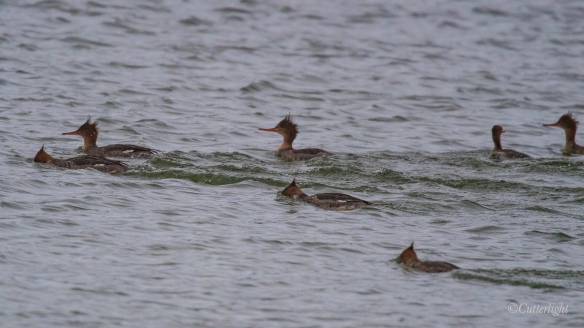 Mergansers are well-known for cooperative feeding strategies – behavior they learn as chicks while hunting with their mother. Although immature birds and females look a lot like immature and female Commons, note A) the very thin bill which can appear to be upturned, B) dark chest and C) absence or near absence of white on the chin. (Chignik Lake, January 14, 2018)

Unlike Common Mergansers, Red-breasteds don’t nest in cavities. They nest on the ground near water. Thus, they are known to breed on the largely treeless Alaska Peninsula. 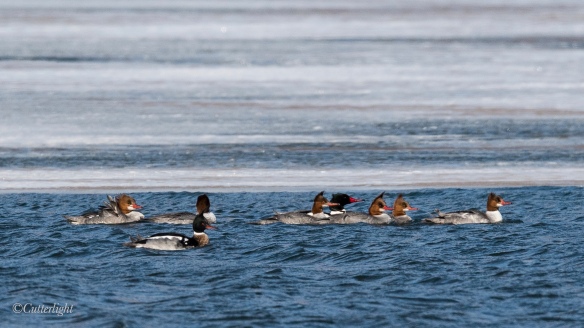 A Red-breasted drake (forward most) mixes in with a group of Common Mergansers on a fishing expedition. Common Goldeneyes often join these groups. (Chignik Lake, March 23, 2017) 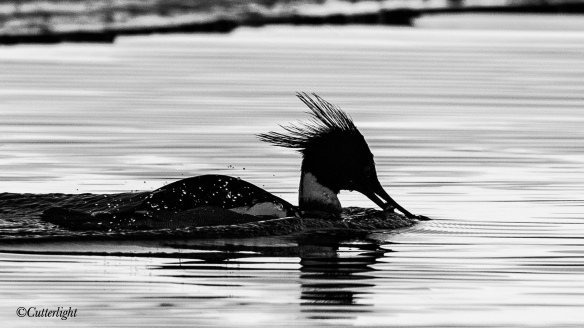 This drake, just coming up with a stickleback, was working an ice edge along with a female Common Merganser and a Common Goldeneye as another day on Chignik Lake came to a close. (December 2016) 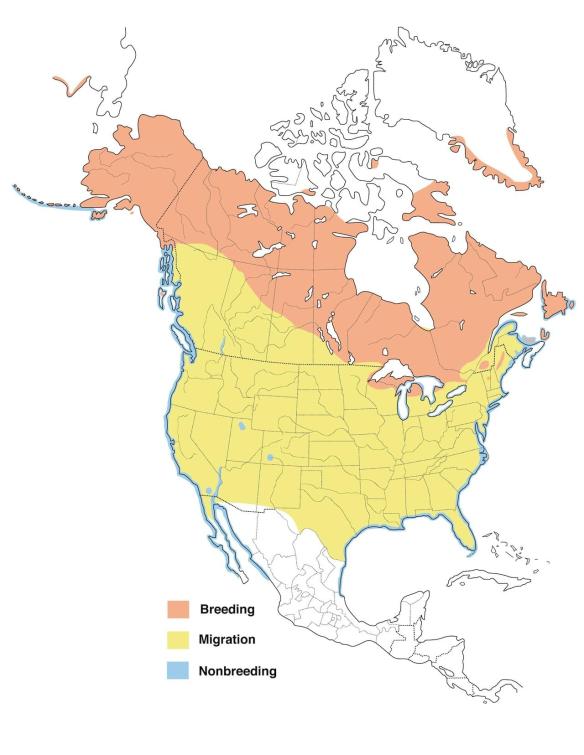 Red-breasted Merganser Range Map: with permission from The Cornell Lab of Ornithology, Birds of the World

Next Article: Nature Watching & Nest Finding: an Exercise in Mindfulness