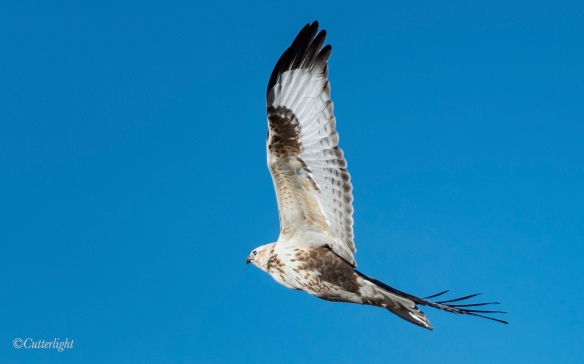 To the extent possible in this project, I’m using images captured in the study area around Chignik Lake. However, since luck conspired against me getting a usable photo of a Rough-legged Hawk in The Chigniks, I’m using photographs of Rough-leggeds I took in Mongolia. There is essentially no difference from continent to continent in the overall appearance of this circumpolar species. (Gobi Desert, Mongolia, October 2014)

This is the hawk of the north, the only species of Buteo to breed in Arctic regions. Around the village of Chignik Lake, we’ve seen both the typical light-colored form as well as an example of the dark morph – an almost uniformly chocolate brown bird when observed roosting, and in flight showing a much darker overall wing, belly and tail band. On lighter birds, when in flight look for almost light-colored wings accented with a dark fringe, dark wingtips and a distinctively dark patch at the carpal joint (wing wrist). 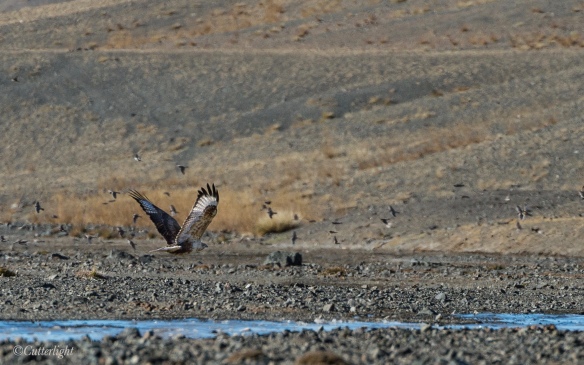 Although this cruising Rough-legged has a flock of Wheatears in a panic, this species has a decided preference for mice, voles and other small rodents. (Gobi Desert, Mongolia, October 2014)

A bulky shape, light, round head, heavily feathered legs and small talons are good field markers when identifying perched Rough-leggeds. In flight, look for a dark wrist patch on the underwing, dark flanks and belly, dark wingtips, and a dark tail band. These are reported to be the most nocturnal of hawk species, thus the crepuscular hours of morning and evening are a good time to watch for them. In flight, soft wing feathers make them nearly as silent as owls. 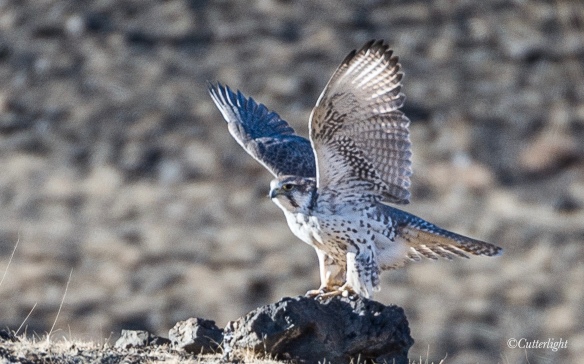 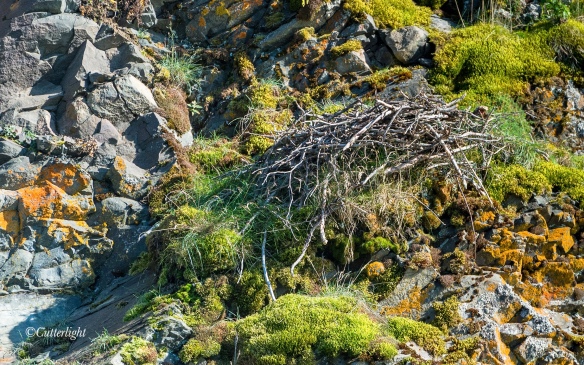 It may not look like much more than a jumble of sticks, but for a number of years this nest on a bluff overlooking Chignik River was home to a pair of Rough-legged Hawks. Unfortunately, winter winds in the valley whose very name means “Big Winds” took the nest down. But in the spring of 2019 – our final spring in The Chigniks -, we saw a pair of Rough-leggeds near their old nesting site. Hopefully they’ll return. (Chignik River, August 29, 2016)

Ermine, lynx, foxes, owls, shrikes and hawks – predators move into an area for a time, do a number on whatever prey species brought them there in the first place, and then they move on. David Narver’s report of Rough-legged Hawks being “common” in the Chignik Valley likely coincided with an abundance of lemmings, voles or possibly ground squirrels and successive successful nesting seasons. We noted these prey species as relatively uncommon to rare during our three years at The Lake, as was the case with Rough-legged Hawks. 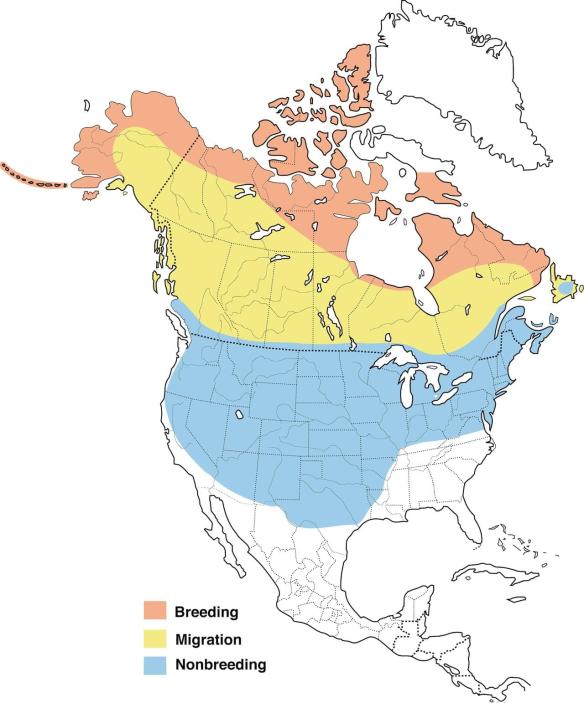 Rough-legged Hawk Range Map: with permission from The Cornell Lab of Ornithology, Birds of the World

5 thoughts on “Birds of Chignik Lake: Rough-legged Hawk – Buteo of the Far North”