I have a particular photograph that, when I got it, I was quite stoked. It’s beautiful. Everyone who has seen it says it’s a great picture. But I look at it now…

It’s a shot of a Common Merganser taking wing. Click. Capture. The camera settings were correct. The light was wonderful. The moment is frozen in time.

He was feeding. Diving. Occasionally coming up with a small fish of some kind. Stocking  calories on a cold winter day. 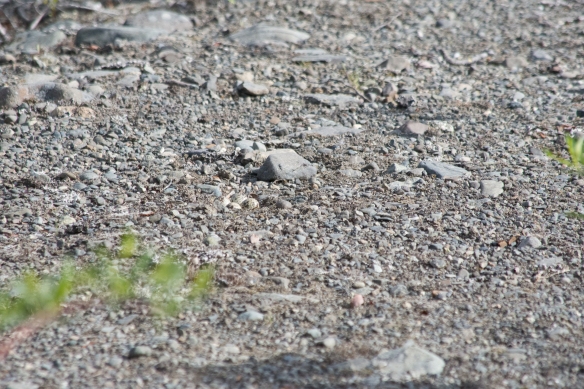 See the nest? Spring through summer, anytime you flush a bird – and especially if a bird is behaving as though it is injured, tread carefully; there’s probably a nest nearby.

The speckling, which breaks up their silhouette, makes these Semipalmated Plover eggs especially difficult to see from a distance – unless you’re looking for them. (Interior Alaska, June 2017)

It’s a dilemma. Ongoing. As a naturalist, a photographer, a student of wildlife, I want to get close. I am drawn toward invading a being’s space. I want to see them in detail. I want to find their nest or den. I want to see what they are eating. I want to learn where they roost or rest.

But I really don’t want to disturb them. Most of my favorite photographs of animals are those in which they aren’t looking at me – photos in which they are going about their business hunting, eating, digesting, loafing, soaking up sunshine or huddling against a storm.

This is how I hope to capture birds – going about their business, oblivious to me. (Pileated Woodpecker, Oregon, June 2012)

As sportsmen and naturalists, we disturb animals all the time. We flush birds. We invade habitat. If my fishing season was limited to catching only what I need to stock my freezer, it would be a mighty short season. But I love to fish. So I fish for charr and trout that I have no intention of keeping, and I cast flies for salmon long after I’ve got plenty of fillets to get me through another year, letting go the additional Silvers that come to hand after I’ve got my quota.

This is not a dilemma to be solved, I think. Rather it is one to keep in mind.

As soon as we step foot in nature, we’re going to have an impact. Plants and invertebrates will be crushed underfoot. Birds will be flushed. A friend of mine walking on a river island once heard a crunch underfoot. He lifted his shoe to find a dripping smear of yolk and albumen from the crushed remains of a Killdeer’s nest. He felt really bad about that. If the world was populated only by bird-loving naturalists, I suppose evolution would have arranged for eggs in shades of neon and florescence.

Let’s hope all four of these greenish, brown-speckled eggs made it into fully fledged Siberian Rubythroats. (Hokkaido, Japan, June 2017)

In recent years, I’ve become pretty good at finding birds’ nests – a skill I’m reluctant to put into practice unless circumstances make it necessary. Hiking through an overgrown field in Hokkaido, Japan, a Siberian Rubythroat burst into flight practically beneath my feet. I knew from experience that there was undoubtedly a nest nearby, and that I’d better take great care with each footstep until I either located the nest and avoided trampling it or had gingerly stepped altogether clear of the area.

Singing his heart out not far from the above nest, this male Siberian Rubythroat has staked out his small piece of Hokkaido. (June 2017)

I once flushed a mallard off her nest. Didn’t know she had a nest until I walked closer to where she had been. I quickly backed away, but it was too late. Before I could get completely out of the area, a pair of crows were happily going to town on eggs that would not become ducklings. Initially, I was mad at the duck for choosing such an open place to build a nest. But the fault was mine; I didn’t know enough about duck behavior to understand that she was brooding.

Those crows knew, though. Smart birds.

Birds are amazingly aware of their surroundings, and so I have little doubt that this merganser and her brood were aware of my presence. But I was tucked away behind vegetation photographing terns. She passed by with a circumspect eye directed my way, but not in panic. Good. A short distance upriver, they resumed feeding. (Tuul River, Mongolia, July 2015)

Next Article: Northern Harrier – Rare but There

8 thoughts on “Nature Watching & Nest Finding: An Exercise in Mindfulness”