The thick, soft fur of the Arctic Fox is the most efficiently warm of any land mammal.

Knighted in 1985, Sir David Attenborough turned 90 in 2016. The world’s most recognized narrator of natural history films, he remains in possession of amazing vitality. 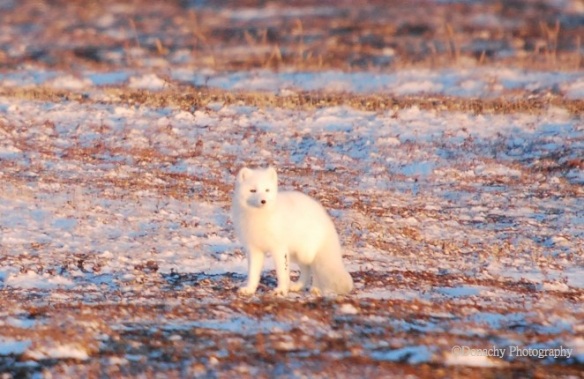 Stunning in their soft, white coats, Arctic foxes (Vulpes lagopus) are common in this part of Alaska. The size of a small dog and as soft on their feet as a cat, these omnivores forage on whatever is available, from berries to insects to small mammals and birds – and it appears, big, fat marine worms!

In the past few weeks, there have been spawning events on our beaches near Point Hope. A couple of weeks ago, we were hearing about small fish – probably capelin (smelt) – coming ashore with the surf. More recently, we’ve been finding large marine worms on the beach. The size of Ball Park Franks, the appearance of these worms has coincided with egg cases in areas of coarse sand and gravel. In turn, these spawning events have drawn numbers of snowy owls and Arctic foxes looking for easy meals to the point of land west of town. 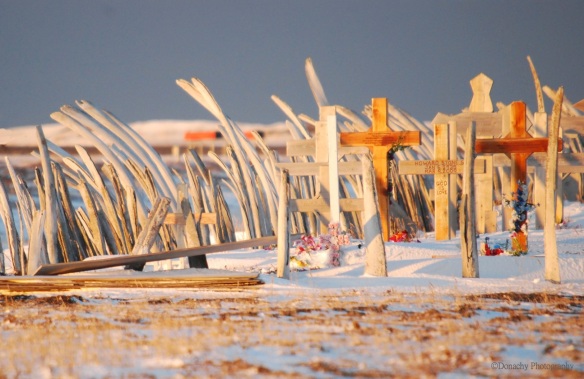 Morning sunlight slants through the jawbones of bowhead whales commingled with crosses at the Tikigaq cemetery in Point Hope, Alaska.

Not so long ago, National Geographic Magazine ran an article about domesticating foxes. Apparently there’s been some success, as breeders in Russia select the most gentle, friendly, trainable and inquisitive offspring generation upon generation. At an average size of six to eight pounds, Arctic foxes would be just the right size to curl up on the sofa for an evening of popcorn and a movie.

Like ribs pushing up from the tundra, these bowhead jawbones mark the resting place of one of Tikigaq’s last shamans.

The diversity – and sheer number – of animals and plants that manage to hack a living out of this cold land amazes us. Far from being the vast, frozen desert the Arctic has often been described as, each season brings with it an astounding number and variety of flora and fauna to the land and sea around Point Hope. Tracks in the snow near our house reveal that we have a weasel or two living beneath our porch!