A fillet prepared à la meunière and served on pasta is one of our favorites when cooking with firm, delicately flavored white fish. We modify the traditional recipe, which means “miller’s wife” (descriptive of the flour this method employs) by using olive oil instead of butter and by skipping the lemon and butter finishing sauce.

Our three favorite methods for preparing fish, in no particular order, are as follows: sashimi – raw, thinly sliced fish dipped in a soy sauce and wasabi mixture; shioyaki – fish salted and then broiled or grilled; and à la meunière – dredged in seasoned flour and pan fried. These three preparation methods are the epitome of simplicity, emphasizing the freshness of the fish rather than sauces or seasonings, and can be accomplished in even the most bare-bones of kitchens. While they won’t adequately cover every species of fish (some species do well only when poached, and a few others shine best when deep fried), they are good methods to have in one’s repertoire.

A collar – the meat just behind the fish’s head, including the pectoral and ventral fins – is a good candidate for meunière. Pictured is the collar from a two to three pound yelloweye rockfish.

Each cooking method works particularly well with certain species of fish. Chinook salmon, for example, is a superb fish for shioyaki and a much underutilized sashimi fish. Yellowtail and other tuna are excellent served as sashimi. When you think of meunière, think of fish that is white, firm but not dense, and mildly or even delicately flavored. Some of the best candidates are sole, flounder, greenling and Pacific rockfish in the genus Sebastes such as black rockfish, copper rockfish, yelloweye and so forth. 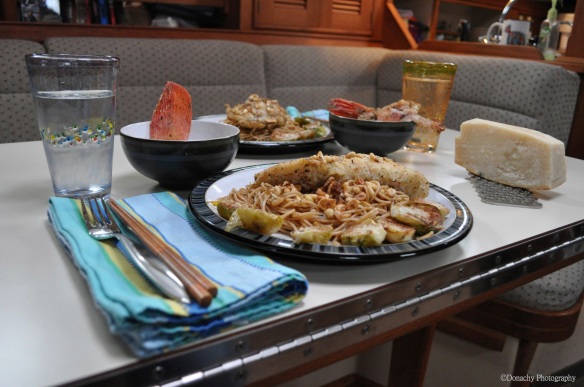 We served the pasta and fillet with a side of fish collars, also prepared à la meunière, and brussels sprouts sliced in half, seasoned with salt and pepper, and pan roasted. This is a simple yet elegant meal that can be prepared in a galley, on a camp stove, or in virtually any kitchen.