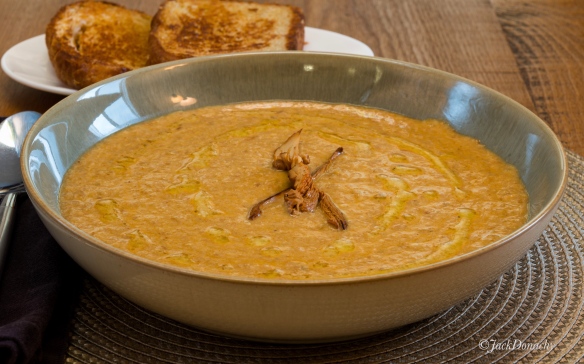 Forget everything you know about mushroom soup and slip a spoon into chanterelle magic.

This past fall when Costco (which we can now have delivered to our home in the Alaska bush) offered fresh, wild-picked chanterelle mushrooms, I couldn’t resist ordering a few pounds. I wasn’t sure what I wanted to do with them other than savor them with a little olive oil, garlic and mozzarella on one of Barbra’s homemade thin pizza crusts, or perhaps present them in an egg-white omelette, but I was confident I’d find something. An internet search brought up Escoffier’s Chanterelle Soup. Reading through the recipe, I began mentally picking out the bottle of Chardonnay I’d pull from the rack to serve with it.

While I stayed fairly true to Auguste Escoffier’s Veloute Agnes Sorel – based on the various English versions of the recipe I scanned through – I made a few adjustments, particularly the second time around. We don’t stock brandy, but we have bourbon on hand; that was an easy swap and it worked well. The chicken broth the original recipe calls for is fine… but we felt that lobster stock, made with Better than Bouillon’s Lobster Base, worked exceptionally well. And toward the end of cooking, a taste suggested that not only serving a Chard with this soup would make for an excellent pairing, but that a quarter cup or so to finish the soup might be warranted as well. In fact, we were amazed at the way in which a little Chardonnay brought this soup together, making the already subtle, silky transitions in the flavors of cream, butter, bourbon, saffron and chanterelles even smoother.

This is not a difficult recipe, but it does have distinct preparation steps. A velouté (vәl-ü-tā) must be created – a mixture of butter, flour and broth. And in the creation of a liaison of egg yolks and cream lies much of the secret of this soup’s silky feel.

Oh, and don’t skimp on the saffron.