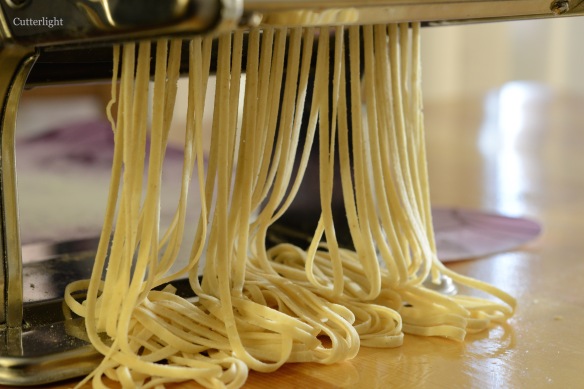 Homemade ramen – the adult (just better) version of that ten-cent package we used to subsist on in college.

Mongolians love their noodles. It is a staple food available in any grocery. Any Mongolian woman knows how to whip up a batch of noodles from scratch and cut them to perfection. I think nearby influences have brought in another version of a popular noodle – ramen. There are lots of tasty ramen shops around Ulaanbaatar. Some shops feature windows into the back where you can see highly skilled noodle makers tossing, spinning, stretching, and cutting dough by hand with a wizard’s touch.

I always liked ramen. But my ramen memories had always included that super-salty instant soup that I used to buy in my early college years. Both Jack and I have fond memories of throwing something into that soup to make it more healthful and more tasty. Now, I have been exposed to beautiful bowls of tasty, chewy ramen noodles swimming in flavorful broth and topped with hard boiled eggs, vegetables, and different meats. On a cold day in Ulaanbaatar, there is nothing more satisfying than a giant bowl of ramen.

Being an experienced pasta maker, I thought there was nothing to making ramen noodles. I even thought they were probably just spaghetti noodles. With that in mind, I made a batch of spaghetti and handed it over to Jack for the creation of soup. That didn’t work. Turns out, it isn’t that simple. The noodles got soggy and fell apart. My pasta-making ego was bruised. After a spell, I decided to give it a try again, this time armed with some research. What gives ramen noodles that necessary chewiness? After reading through a few websites, I decided to experiment. It seems that ramen noodles need something called an alkaline salt. One website cited that the origin of the noodles is from a place where the water has a high minerality which contributes to the texture. The most common ingredient for this alkaline salt is called kansui, which can be purchased in Chinatown. As there is no “Chinatown” in Ulaanbaatar, I needed to make my own. Thank goodness for the internet. A quick search revealed that kansui can be made at home by baking baking soda for an hour in a 250 degree F oven. Harold McGee of the New York Times explained baking the baking soda essentially changes the sodium bicarbonate into sodium carbonate which is an alkaline salt, that works perfectly in ramen noodle dough.

After a few experiments I learned that adding a little salt to the dough recipe made the noodles taste better. I never add salt to my regular pasta noodles. I also tried making noodles with all purpose flour and again with semolina flour. I happen to have a lot of semolina in my pantry right now. Turns out the noodle texture and flavor is similar with either flour, so I can say that those two flours are interchangable in this recipe.

With a successful recipe in the box, we are happily eating ramen that is 1,000 times better than the ramen both of us subjected ourselves to in college. Jack has been creating soup bases from broth, miso and even tomato juice. We’ve been adding pan fried meat like chicken or pork. Sauteed vegetables like eggplant and asparagus have entered the scene lately. Sometimes we amp up the spice by floating a bit of Cholula or Sweet Chili Sauce atop the whole dish. I’ve found that keeping portions of the noodles in ziptop bags in the freezer allows us to have the “instant meal” like the old days but with a fresh-made flavor.