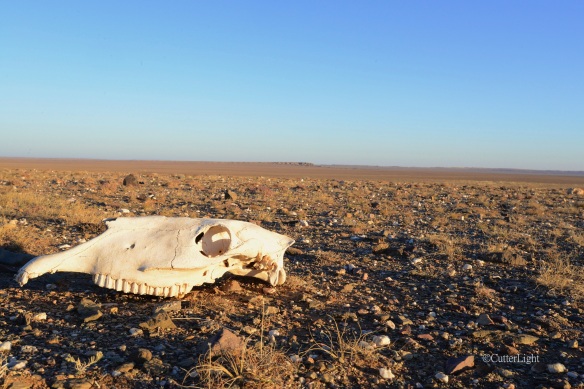 In the distance, Mongolia’s Tsagaan Suvarga – The White Cliffs. In the foreground, a camel skull. A zud (harsh winter) can wipe out hundreds of thousands or even millions of livestock. And yet a hardy breed of people thrive here and in a land where humans and their herds of animals have coexisted with nature for millennia, wild animals are surprisingly abundant.

As we continued our journey south, the land unfolding before us bore little resemblance to what we had imagined the Gobi would be like. Throughout the journey, our van passed through nearly endless mixed flocks of passerines – wheatears, larks, buntings and sparrows. Eagles, hawks, ravens and vultures soared overhead. And there were times when gazelle seemed to be everywhere. 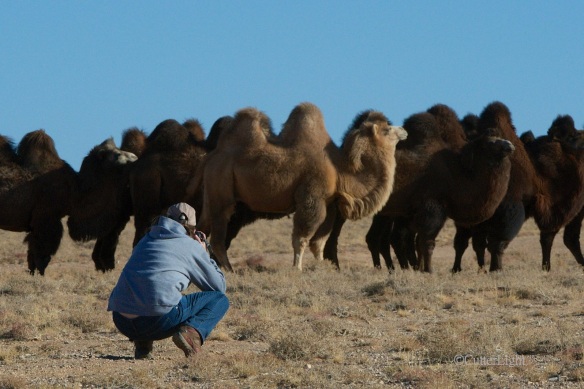 Initially, we had no idea what to expect from the domesticated Bactrian camels we encountered, so we approached with caution. As it turned out, they were even-tempered and in some cases not opposed to having their heads scratched. With thick coats of fur, sturdy legs, heavily muscled bodies and the capacity to go for a full week without water, these magnificent animals have evolved to thrive in one of the world’s harshest environments.

“Would you ride one?” Barbra asked playfully motioning toward the group of camels standing a few meters from us. I could tell by the smile on her face and the twinkle in her eyes that she was in.

“Maybe,” I replied with some hesitation. They appeared to be docile enough.  “But not in circles in some tourist camp. If I get on a camel, it’s going to be to go somewhere.”

In fact, we’d get our opportunity in a couple of days. Between seeing several mammal and bird species that were new to us and after eating and drinking things we’d previously only read about (and in a couple of instances had never heard of) this proved to be a trip of firsts.

A thick-necked buck (center) vocalizes an alarm to his group of females and young. Mongolian gazelle (Procapra gutturosa) are the definition of skittish. It took our group several attempts before we began to learn how to approach these shy animals closely enough to get decent photographs.

Almost constantly on the move and sometimes covering thousands of square miles in a given year, Mongolian gazelle have adopted a nomadic lifestyle well-suited to the arid steppe and desert. Hunted both legally and illegally, their numbers remain robust at more than a million individuals. On our trip from Ulaanbaatar to the Gobi, we encountered thousands.

Pounding hooves and flying dirt. Standing about as tall as a man’s knee at the shoulder, these diminutive ungulates are capable of speeds up to 40 miles an hour (65 kph). (Click any of these photos to enlarge them.)

With seven of us in the van along with camera gear, sleeping gear, cooking gear, small chairs, tubs of food, extra water, eight three-liter boxes of wine, gifts for our host families, day packs and clothing bags rattling over steppe and desert, you might suspect we felt crowded and uncomfortable. It amazed us that we did not. We never tired of seeing the wildlife and landscapes and anticipating what might be around the next hill.

Nonetheless, after a day of bouncing across the open range, we were always happy to pull into our next ger, meet our hosts, and settle in.

Our hostess aerates a steaming pot of yamani suute tsai (suu – te – tsay) . Goat milk tea is a staple beverage in many Mongolian gers. Adamant non milk drinkers, Barbra and I loved the warmth, nutrition and flavor of this drink and came to look forward to a steamy bowl of it (or of the equally delicious temeeni suite tsai – camel milk tea) before dinner each evening.

Gers are eminently well-suited to the life of nomadic herdsmen and their families. Round and with conical roofs, there are no flat walls or edges to catch the wind. Covered with felt, they are well insulated. At around 500 square feet, (46 square meters) these one-room homes are an answer to the “tiny house” movement’s quest for a comfortable, efficient living space.

In modern times, many gers feature solar panels and batteries to power TVs and lights. A centrally-positioned steel stove, generally fueled with dry dung, serves as both a cook-stove and a heating system. Typical gers are appointed with wooden-framed beds, a small dining table, a few chairs, and perhaps a chest of drawers or two, all generally brightly colored. If you look around carefully, you’re likely to notice a rifle tucked away somewhere; wolves are still a threat to livestock in many locales, and foxes are common. There is no running water.

Although many herdsmen tend their animals on horseback, motorcycles have proved their usefulness as well.

In the last remaining light of the day, our host prepares a young sheep for dinner. His wife used the entrails to whip up the best country sausage we’ve ever tasted. Nothing was wasted. As the eldest in our group, I was offered dibs on the heart, kidneys, lungs, blood sausage, liver and the highly prized, succulently fatty tail. Some of these were epicurean firsts. Salted and otherwise very lightly seasoned, all were quite toothsome. The cigarette, which our host hand-rolled prior to beginning this chore, never left his lips. 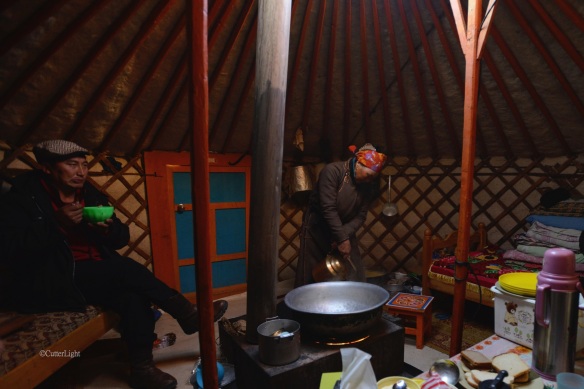 Breakfast. Our driver, Nimka, relaxes with a bowl of goat milk tea in which homemade sausage from the previous night’s meal is steeping.

Following Nimka’s lead, I have a bowl of the same. It was absolutely delicious.

No doubt the key to the excellent flavor of everything was its freshness. Here is the bucket our hosts used for milking the goats.

Looking out over the desert plain from a vantage point on the White Cliffs. Day by day, hour by hour, we found ourselves falling in love with this country.

Next stop: Yolin Am Canyon: Remnants of the Gobi’s last glacier. Ibex, Picas, Raptors and more…