Salmon, halibut and rockfish fillets from fish caught in Resurrection Bay, vacuum sealed and flash frozen for fresh-from-the sea taste, ready to make the trip north to Point Hope. And a plug for Alaskan seafood: it’s wild, sustainable, healthy, and some of the best-tasting on the planet!

One of the biggest challenges living in the bush presents is provisioning for a year’s worth of meals. When we  moved to Alaska, Barbra and I brought with us some of the skills we’d acquired in our lives in Oregon and California.

For starters, we’ve always had Costco memberships and we use those memberships to stock up on bulk purchases from rice to olive oil to meat, fish and poultry. To make this work, we use a FoodSaver vacuum-pack system to repackage meat in smaller portions, which we then freeze. In addition to having some of the very best meat, poultry and fish available – and at prices well below specialty stores carrying products of comparable quality – Costco also carries the best frozen fruits and vegetables we have found. Their Executive Membership, which costs more than a regular membership, offers a 2% rebate on purchases, and thus more than pays for itself, meaning that we don’t incur a membership cost. But even if we had to pay a nominal fee, we’d still be Costco members. They treat their employees well, and they offer quality products and service. And buying in bulk is green: less packaging (much of our repackaging material is reusable), and fewer trips to the store means less fuel consumption.

In our life before Alaska, we were already harvesting most of our seafood and freezing (and smoking) it. Annual berry-picking pilgrimages provided us with a year’s worth of blueberries – a fruit that not only is delicious and versatile, but which freezes well, too.

The challenge we faced upon moving to the bush was getting all this food, and other supplies, out to the village. Here’s the short explanation of the solution: Rubbermaid Roughneck Totes and Coleman Xtreme 52-quart coolers. 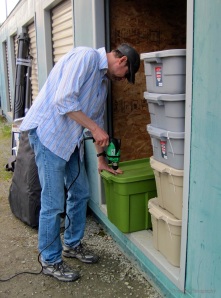 Left: Drilling holes in lids and totes to be zip-tied shut for parcel post. Right: Empty coolers at the post office, ready to be mailed south where they’ll be filled with frozen and cold food at the end of the summer and checked on our planes north to the village.

We drill the Rubbermaid totes so that the lids can be zip-tied (cable-tied) to the tub. Rubbermaid totes are tough and unaffected by cold temperatures. Cheaper totes don’t hold up, and in the long-run are expensive because they have to be replaced as they break down. All of our dry good are mailed up parcel post in these tubs. We’ve mailed hardy vegetables (squashes, potatoes and onions) and hard cheeses in these tubs as well. In Alaska’s cool temperatures, they’ve been fine.

The coolers travel on the plane when we fly up. There are better coolers than Coleman Xtremes, but so far these have been fine. The price is right, they’re tougher than really cheap coolers, and they weigh in at a reasonably light weight – an important consideration. The 52-quart size is manageable even when fully loaded with frozen food.

We stuff at least eight of these coolers with as much fish, meat, chicken and frozen vegetables and berries as we can and pay the extra luggage fee. We’ve been sealing these coolers with duck tape, but this summer we’re planning to experiment with a solution that won’t require having to use and throw away a roll or two of tape each time we ship. 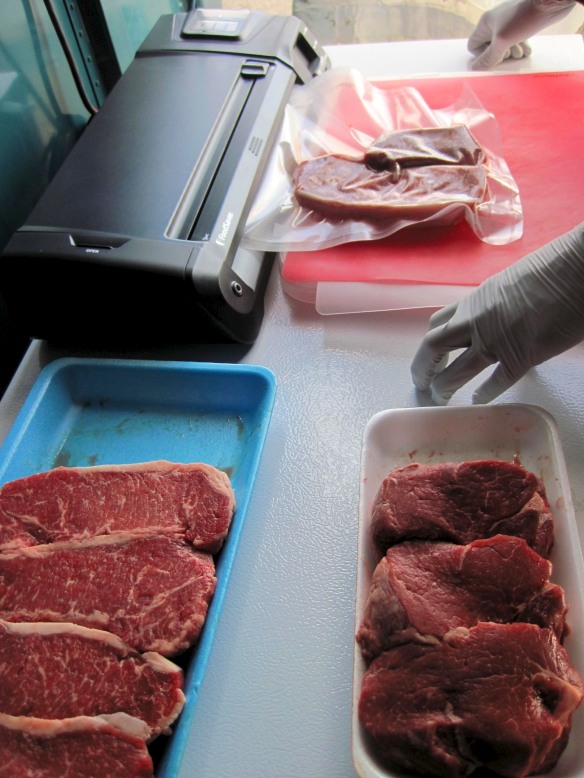 New York Strip steaks (left) and filet mignon (right), purchased in bulk from Costco are packaged with one of each per vacuum-sealed pack for a Porterhouse without the bone. Meat, poultry and fish packaged and frozen this way will keep for over a year; the result is that we waste virtually nothing.

7 thoughts on “A Year’s Worth of Food: Provisioning for the Alaska Bush, Part I”