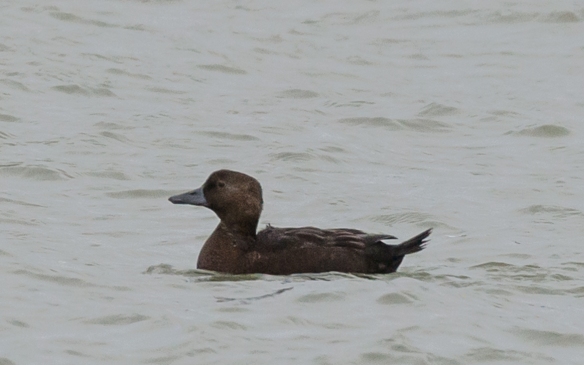 Straight away I could see that the small, dark duck bobbing on the Chignik on a cold, windy, misty November day was something “different.” As it was milling around at a downriver location I couldn’t get to, I snapped a couple of photographs from a distance and hoped I’d be able to figure it out when I got home and could look at my Sibley’s Field Guide and the various bird websites bookmarked on my computer.

I was not guessing eider. New to birding, the only eiders I’d ever seen were further north – rocketing splashes of color pointed out to me by local Natives as they winged by. Brilliantly marked drakes. A friend at The Lake tells me he sees King Eiders down at The Bay. If I can get my boat out to The Lake…

Like many other diving ducks, eiders are catholic in their diets. At sea they primarily go for mollusks, worms, small fish and crustaceans. While on their tundra breeding grounds, they consume fairy shrimp, insects, grasses, sedges, and berries.

These Arctic ducks are especially sensitive to a changing climate. Their numbers are in decline. Probably one reason for this is that as temperatures warm, various predators – particularly those of eggs and nestlings – are able to move northward.

Steller’s Eider Range Map: with permission from The Cornell Lab of Ornithology, Birds of the World

Previous: Long-tailed Duck – Political Correctness or Respect… When is a Name Change Merited?

Next Article: Black Scoter – Springtime Courtship on a Wilderness Lake