No duck dives deeper (up to 200 feet) or more frequently than the Long-tailed. To catch The Chignik’s handsome, Neapolitan-ice-cream-colored drakes at their most colorful, you’ve got to get out on the lagoon in late winter when they are at their most abundant and resplendent. Later in spring and on through summer, they’ll disperse to tundra ponds where they molt into drabber plumage and lose their eponymous tails. (Chignik Lagoon, March 9, 2019)

You can find passages in older texts in which Long-tailed Ducks are identified by their former moniker, Old-squaws, an appellation assigned to these stunningly beautiful creatures for their habit of gathering in large groups where their somewhat gull-like calls and melodies fill the air almost without cessation. The name is a trifecta of insult – besmirching women, elders, and Native Americans in one fell-swoop. Come to think of it, it doesn’t do any honor to the ducks either. Several thoughts tempt my fingers to give them voice on this keyboard, but I refrain. 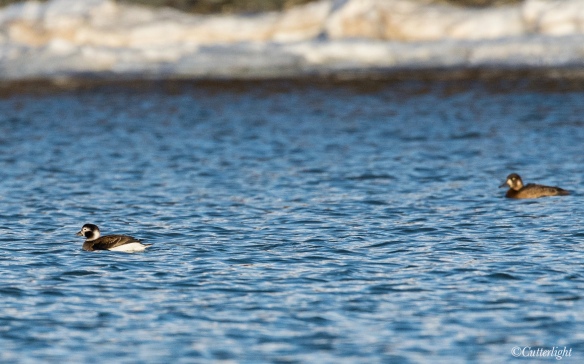 On patrol for mollusks and whatever else might be presented during a dive, a Long-tailed (left) ambles along with a female scaup on Chignik River. (December 30, 2016)

When, in the year 2000, the U.S. Fish and Wildlife Service in Alaska petitioned the American Ornithologists’ Union Committee on Classification and Nomenclature to change C. hyemalis’s common name, the committee balked. Categorizing empathy for those who might be offended by the term Old-squaw as “political correctness,” members of the AOU took the position that such sensibilities alone did not justify new nomenclature.

One might reasonably counter, “For goodness sake, why not?” We’re talking about language here; shouldn’t the way we speak be permitted to evolve alongside insight, understanding, and other manifestations of enlightenment?

The above Long-tailed Ducks were part of a group of 13 we came across on an Arctic tundra pond near Point Hope, Alaska. (August 25, 2013)

The objections of some AOU members notwithstanding, the pressure was on. Refuge was found by couching the long overdue change as a matter of maintaining consistency with the rest of the English-speaking world where “Long-tailed Duck” had already long been designated.

The matter of naming birds (and other beings) is interesting. Wouldn’t we all be better served by appellatives that describe a characteristic of the animal in question rather than some anthropomorphized perception of their behavior, or more arbitrary still, the surname of whomever claims first to have “discovered” it?

In any event, in the matter of C. hyemalis, Long-tailed Duck it is. Though, I’ve got to say, I can’t look at a drake in late-winter plumage and not think of that tri-colored Neapolitan ice cream, the candy-red eye a cherry on the chocolate.

From Flattop Mountain, you can take in a view of the Chignik River flowing into Chignik Lagoon. The entire drainage is rich with aquatic vegetation, mollusks and other invertebrates, and small fish, all of which represent potential meals for the area’s waterfowl. (September 21, 2018) 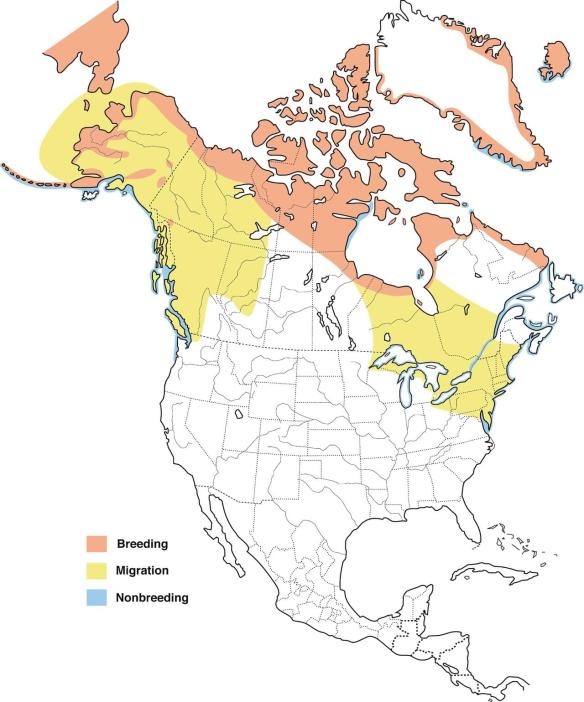 Long-tailed Duck Range Map: with permission from The Cornell Lab of Ornithology, Birds of the World

Previous: Canvasback – The Duke of Ducks

4 thoughts on “Birds of Chignik Lake: Long-tailed Duck – Political Correctness or Respect… when is a Name Change Merited?”