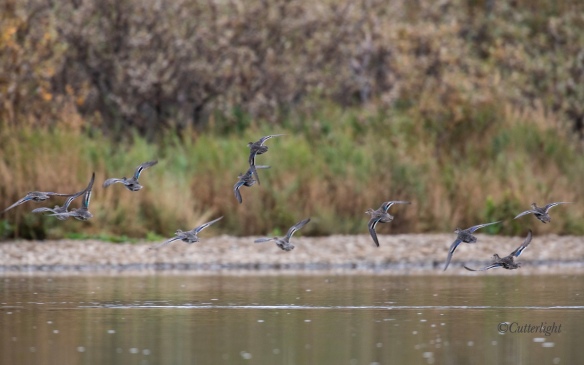 The Chignik watershed’s smallest and wariest duck, a flock of Green-winged Teal take flight near a group of islands where in fall they can often be found – but not easily approached. It is likely that they are in the same location in early spring as well. (September 22, 2018)

I never got more than a distant look at the Chignik’s Green-winged Teal. There is a group of gravel islands, some carpeted with willows and other vegetation, where they could reliably be found in fall. But they typically hung out on the downriver side of the islands. Approaching them, Mallards, mergansers and other upriver birds invariably flushed first, sending a rippling alarm downriver to the teal. A passing eagle had the same effect. The behavior always surprised me, as in other locations I’ve found teal to be fairly approachable.

The only occasion when I got even remotely close to these little ducks was one day when I was photographing bears and not paying much attention to the birds. Out on one of the islands, when I turned around these two Green-wingeds were there. I got the above shot, but they did not permit even one step closer. It is no doubt their reputation as a gourmet’s delight that prompts their wariness. (September 24, 2018)

Measuring just 14 inches from tip to tail and weighing an average of only ¾ pound, North America’s smallest duck is astonishingly quick to take wing. Herbert K. Job asserts that “From the culinary standpoint, surely there is nothing more luscious in the realm of waterfowl…,”1 which may explain the celerity with which they become airborne at any sign of danger. At parks and reserves where they aren’t hunted, teal can be considerably more approachable. 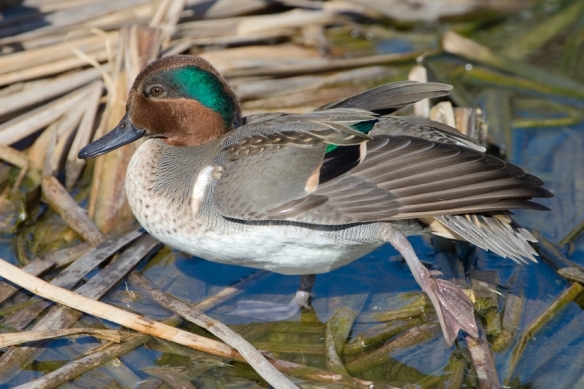 Green-winged Teal Range Map: with permission from The Cornell Lab of Ornithology, Birds of the World

David Narver, Birds of the Chignik River Drainage, summers 1960-63: Common on Black River and most streams; rare on the lakes

Next Article: Life on the Frozen Chignik