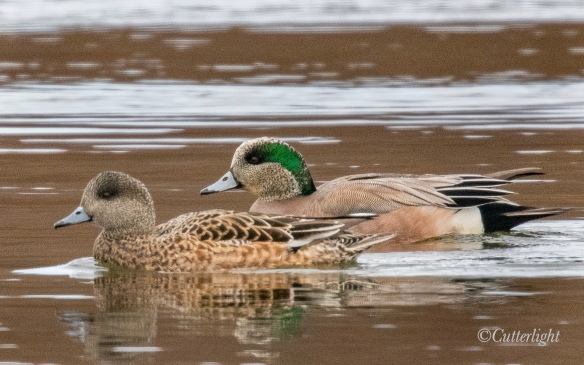 American Wigeons are a typical part of the the spring duck mix on The Chignik. This pair, along with another male, were hanging tight with a pair of Tundra Swans as they fed at an eddy favored by waterfowl. (May 4, 2019)

The first wigeons I ever encountered were of the Eurasian variety – back when I lived in Japan. On my way fishing, I’d often stop my bike on a bridge above Hiratsuka’s Hanamizu River. I wasn’t much of a birder back then, but the teal, wigeons, shovelers, mallards, pintails, egrets, and herons that gathered in the pools and riffles below the bridge fascinated me. At times, a shrike would put in an appearance as well. But sea bass, fluke and other species swimming the nearby coastal waters beckoned, and so I seldom lingered long. These days my priorities have shifted and I carry with me the small regret that I neglected to photograph the river’s kawasemi – glimmering aqua-and-orange plumaged Eurasian Kingfishers. 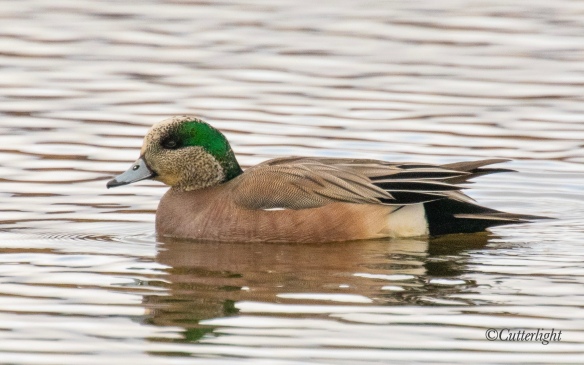 American Wigeon drake, Chignik River, Alaska. Wigeons are well-known food thieves, mixing in with other ducks and stealing food right from their bills. (May 4, 2019)

I don’t recall seeing American Wigeons until I lived at The Lake, but during breeding the male’s white crown-stripe framed in iridescent green makes this species unlikely to be mistaken for anything else. “Baldpate,” they are named in my copy of Birds of America1 – an unfortunate epithet for this handsome fellow. The same text gives an alternative common name as “American Widgeon” (with the added d) and the genus name Mareca which later became Anas and has since reverted back to Mareca, so nomenclature for this species has changed since that book’s 1917 publication. 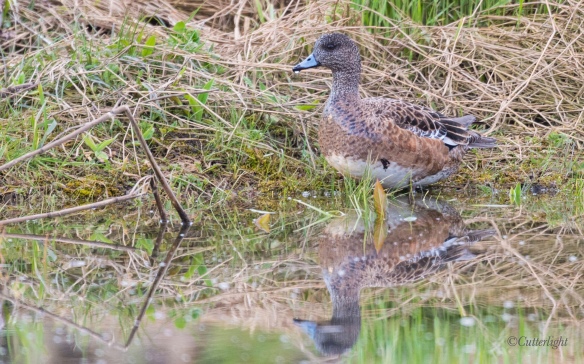 Female wigeon, Chignik River. The most vegetarian duck, wigeons’ blue-gray bills are short compared with other ducks – an adaptation for pulling and breaking off tough vegetation. However, particularly during the breeding season, females take in more insects and other invertebrates. (May 12, 2019)

We generally encountered wigeons in pairs on the lake, on the river and on nearby ponds. As with other dabbling ducks, it is likely that breeding occurs at remote places in the drainage. It pays to listen for the male’s soft, whistling call when approaching likely habitat. 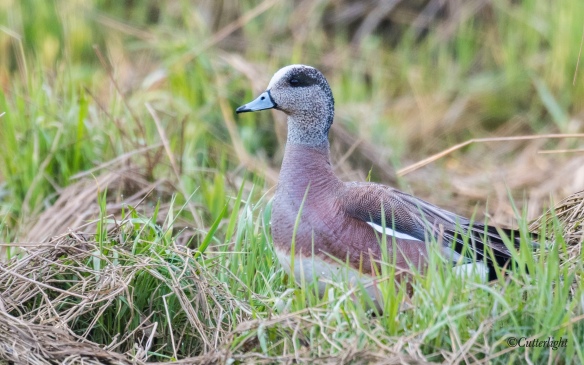 On the one hand, this drake in profile nicely shows the male wigeon’s cinnamon-brown flanks. On the other hand, he illustrates a point common to bird plumage: In this light, although photographed from several angles, his head showed none of the green wigeons in breeding plumage are known for. In different light, the shimmering green likely would have been obvious. In still different light, the stripe might take on a coppery-bronze iridescence. (May 12, 2019) 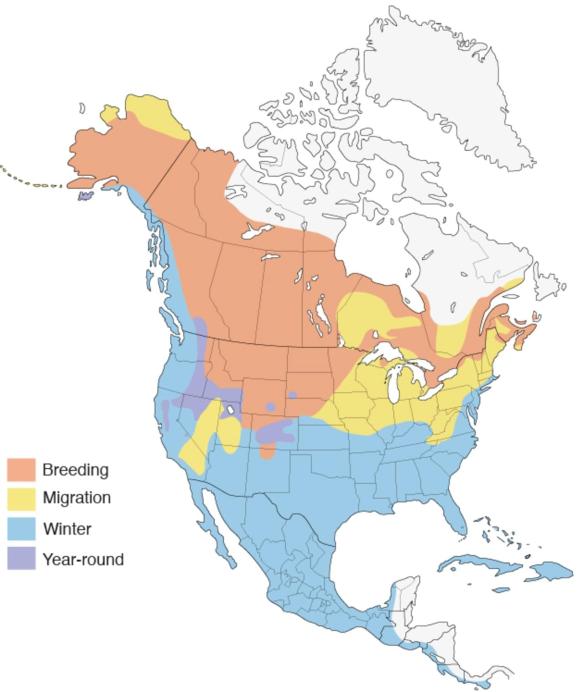 American Wigeon Range Map: with permission from The Cornell Lab of Ornithology, Birds of the World