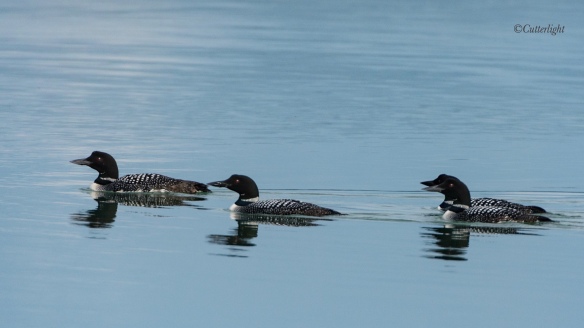 Beneath calm, blue skies a group of Common Loons cruise The Lake on a morning in late summer. In addition to Commons, I frequently encountered Pacific Loons. Yellow-billed Loons showed up two of three years, and just one Red-breasted Loon, which David Narver had reported as occasional in his earlier study, made an appearance in those years. Perhaps the estuary or the headwaters at Black Lack would have been a more productive place to look for the latter two species. (Photo: August 20, 2016)

Loons of The Lake

Of all the wild creatures which still persist in the land, despite settlement and civilization, the Loon seems best to typify the untamed savagery of the wilderness.
Edward Howe Forbush, Game Birds, Wild-Fowl and Shore Birds, 1916

Often solitary, mysterious and romantically wild, it seems fitting that this project should begin with genus Gaviidae, the loons. We encountered our initial Chignik loons, a group of four Commons, in early August shortly after our arrival at The Lake. We had made our first hike to the mouth of Clarks River, three miles along quad trails that cut through willow and alder thickets and across rolling tundra, berry bogs and savannah-like meadows. Fireweed, yarrow, geranium and goldenrod were in full bloom, and electric flashes of yellow darting through brushy thickets offered tell-tale signs that warblers hadn’t yet migrated south. Along the way we took note of ripening blueberries, sampled the last of the salmonberries and measured our boots against the tracks of the Chignik’s massive Brown Bears – some of the largest in the world, we had read. Salmon parr flashed in air-clear pools at stream crossings and the prints of foxes, moose, wolves and Sandhill Cranes gave evidence that we were hardly alone in this sweeping landscape rimmed by snow-capped mountains.

Two miles into the hike the trail curved down to a sandy lakeside beach. With huge paw prints coursing up and down the shoreline, the beach had the appearances of a Brown Bear superhighway. Vibrations transmitted through the sand by our own footsteps set the shoreline water into rippling motion as schools of salmon flipped their caudal fins and scurried for the safety of deeper water. Out on the lake, a pair of harbor seals popped up and gave us studied looks before slowly sinking out of sight.

This is amazing! we agreed. 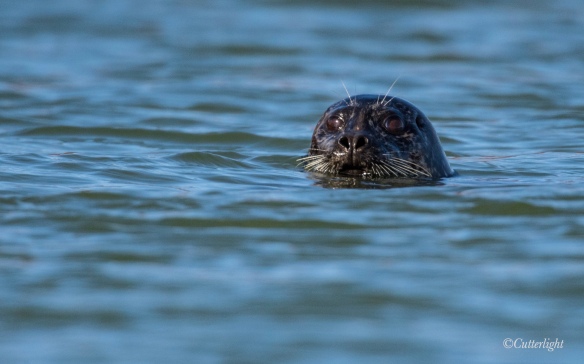 Like River Otters, Red Foxes, and Black-capped Chickadees, ever-curious Harbor Seals can’t seem to help but pop up for a look when something new comes into their domain. Chignik Lake’s seals are not strictly lacustrine as tis the Lake Iliamna population. However, in nearly every month there seem to be a few around. (March 9, 2019)

And then we spotted them: loons! Swimming together as they worked along the shoreline and occasionally diving to feed, they seemed unconcerned by our presence . At the time, the notion of making a multi-year study of The Lake’s birds was only barely beginning to form in my mind, and, as luck would have it, I had not brought my camera along on the six-mile round trip hike. Too bad. August was young and the birds were still wearing their distinctive chess-board breeding plumage. Their bright red eyes caught the sunlight as we watched through binoculars.

And then an odd thing happened. The loons began swimming closer to us. And closer. It was as though they were curious. We’ve had foxes, coyotes, otters, ermine, bears, whales, porpoises, Salmon Sharks and even a wolf engage in this behavior, and anyone who has spent time around chickadees knows that they often can’t help themselves from coming in to examine whatever has come into their territory. But loons? The very symbol of wilderness mystique? This was a new one for us. Soon, we no longer needed our binoculars. Even a simple pocket camera might have recorded a decent photograph. The soft morning light was perfect. Barely a ripple creased the lake’s calm surface.

As I bemoaned the fact that I had nothing to shoot with, Barbra consoled me with words of wisdom.

Pet the whale… Nat. Geo. photographer Joel Sartore’s advice to sometimes set the camera aside and enjoy the moment you’re in. What a moment it was. Welcome to Chignik Lake.

Previous Article: The Chigniks – Avian Diversity and Change in a Remote, Unique Environment

2 thoughts on “The Loons of Chignik Lake”