Alas, poor Chippy. I knew him, Barbra; a fellow of infinite jest; of most excellent fancy…‡

I was probably about 12 when I read Jean Craighead George’s My Side of the Mountain. In this book, which surely ranks as among the greatest adventure stories for young people ever written, the 15-year-old protagonist, Sam, leaves his parents’ confining New York City apartment and strikes out for his great grandfather’s abandoned farm in the Catskills. There, he takes up residence in a hollow Hemlock Tree, catches trout, raises a Peregrin Falcon and…

Finds a weasel in a box trap he’d set in hopes of catching animals for sustenance. Sam allows the weasel to come and go as it pleases. The weasel hangs around and Sam bestows on it the name Barron for its bold, confident demeanor. How cool. I wanted a weasel like that.

Imagine my thrill when, shortly after moving into our place here in Chignik Lake, one of these spry little fellows practically ran across my foot as he darted past me and dashed under the steps of our Arctic entrance as I opened our front door. The steps, while inside the foyer, are open and the foyer itself sits atop earth. It is a haven for voles, shrews and, of course, weasels. Chippy (I named him or her almost immediately) spun around, sat up and looked at me through the steps. What a handsome, self-assured creature with those large eyes, round ears, pink nose and whiskered face, dapper in a brown coat and white underbelly. In truth, I only saw Chippy a couple of times after that, and only for the briefest of moments each time. Nonetheless…

We had a weasel living with us.

But winter came, and neither of us had seen Chippy for quite some time. Occasionally in the early morning after a fresh snowfall, we’d see weasel tracks and although they could have belonged to any number of weasels (there is no shortage of them here in the village), we liked to imagine they were Chippy’s, evidence of happy nights spent chasing voles and other small creatures.

Meanwhile, the area beneath the owl trees has become a veritable boneyard. Magpie feathers, skulls and wishbones litter the ground along with smaller avian skulls, vole-sized pellets of mashed together bone, teeth and fur, jawbones of small mammals and…

The skull of a weasel. We’re very happy that our resident Great Horned Owls are making it through this unusually cold winter, but… Chippy, we hardly knew ye. 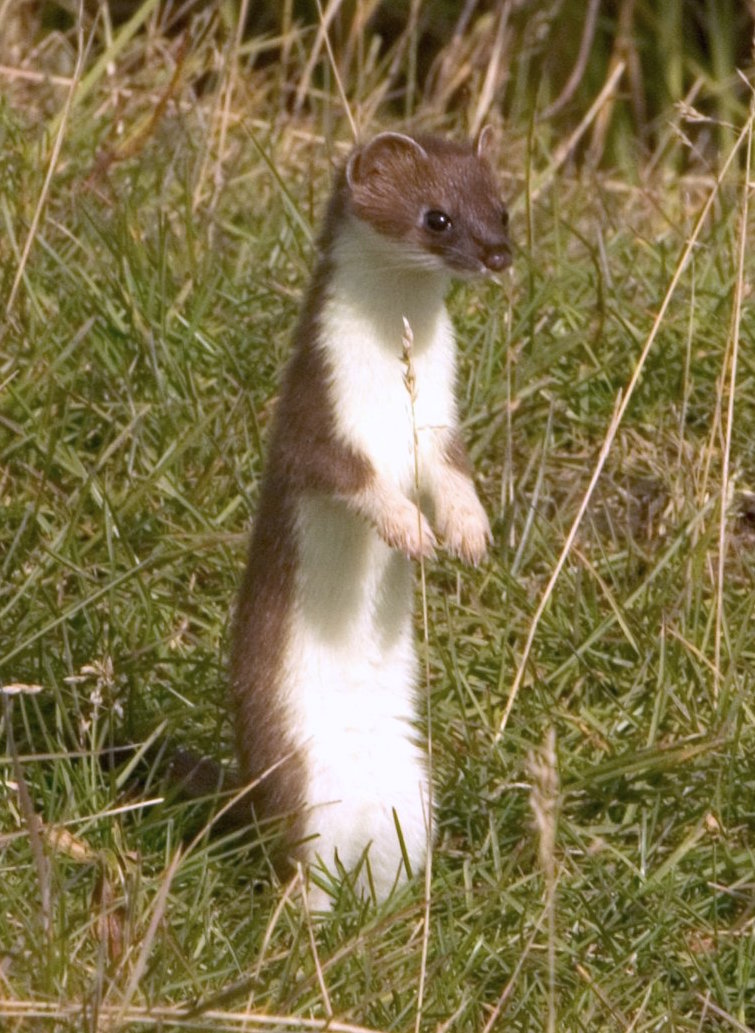 Short-tailed Weasel, Mustela erminea (Photo Credit: Steve Hillebrand, USFWS on Wikipedia)
Also known as Stoats and Ermine, Long-tailed Weasels are related to otters, mink, martens and wolverines. Although they’re only about 10 inches long (25 cm) from nose to tail tip, like their biological cousins, they are fierce predators, sometimes preying on much larger animals. In winter, their fur becomes snow white except for the tip of their tail which remains black. Six years is a long life for a Short-tailed Weasel.

*It is unlikely that the skull we found beneath the White Spruce Grove is actually Chippy’s – or that this is the only weasel Chignik Lake’s Great Horned Owls have dined on.

‡Fans of Shakespeare will recognize this passage from Hamlet’s musing on mortality as he holds in his hand the exhumed skull of a favorite court jester, Yorick.

This is the first article for Wildlife Wednesday, a new column on Cutterlight. Stay tuned (or sign up) for weekly articles on birds, mammals, insects, wildflowers and more.

2 thoughts on “Wildlife Wednesday: The Short, Happy Life of Chippy the Long-Tailed Weasel*”