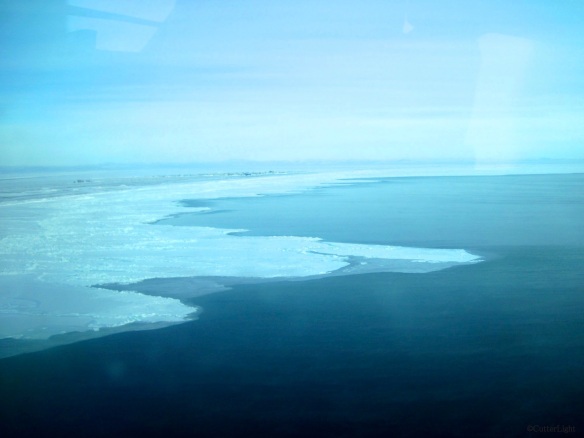 Sea ice fascinates us. Our village can be seen in the upper left of this photo. At the time of the photo, north winds had blown much of the ice away from the land. The “sticky ice,” the ice which clings to the shore, can usually be relied on to be safe to walk on. Even this sticky ice is subject to the whim of Mother Nature’s strong winds and current.

Piles of ice form along pressure points of the frozen surface of the sea. There are many histories of boats navigating too late in the season and becoming stranded or crushed between these pressure points.

Recently, wind from the south has closed this lead – the open water to the right. The view from our village today is solid ice as far as the eye can see. The villagers are readying their seal skin boats to go whaling. Soon the bowhead migration will begin. When the north wind blows open a lead, the whaling crews of Tikigaq will patrol the open water in hopes of catching animals that are in their Spring migrations. These whales make up a critical part of the subsistence catch in this Inupiat village. 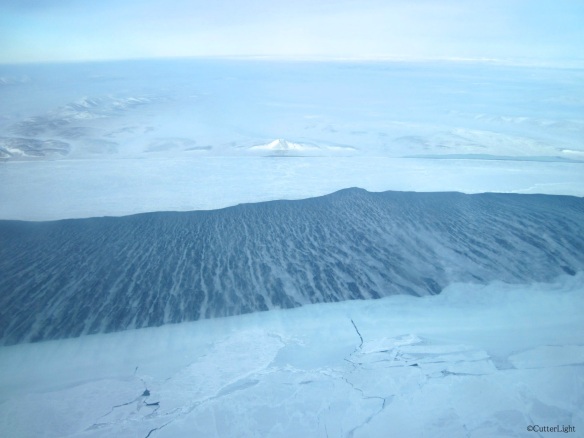 I’ve recently been reading the book The Firecracker Boys. This true story is about a crazy post WWII idea some engineers and scientists had for using a nuclear bomb to blast a harbor between the peak in the center of this photo and the ridge on the left. This is about 25 miles east of Point Hope. The proposed  H-bomb  was to be 163 times the strength of the bomb that was dropped on Hiroshima. Scientists and engineers promised to sculpt the land based on human requirements. It was part marketing (using bombs for good) and part wild scientific experimentation. It’s a shocking and crazy true story!

Nose pressed to glass, I peered out from the bush plane window as we lifted straight up, like a helicopter, in the 40 m.p.h. north wind. It seemed scary on the ground. With gusts well above 40 m.p.h., the plane arrived, landed on the airstrip and never turned into the usual parking area. I fought my way toward the plane, slipping along the airstrip as if being pushed down by a strong arm. Once in the plane, I felt calm and safe with skilled bush pilots at the controls. 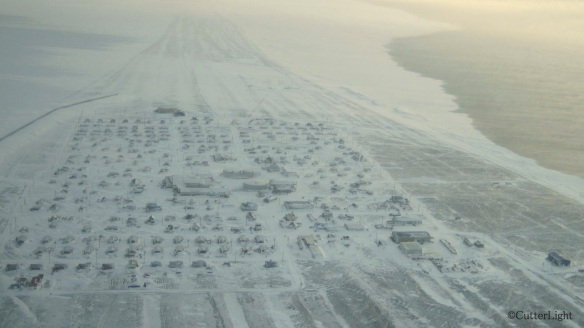 From the air, the village looks like a patchwork quilt as rooftops peak above a blanket of snow. If the snow and ice were sand, Point Hope could be any beachfront real estate in the world!

10 thoughts on “Nose Pressed to Glass”