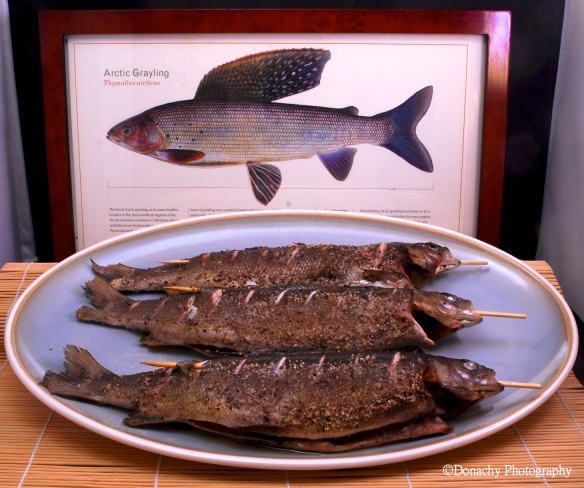 Arctic grayling are abundant throughout much of Alaska. I was happy to finally have an opportunity to taste them. I skewered these three, cut a few diagonal slashes in their skin, and salted and broiled them in the fashion that Japanese prepare charr, trout and small salmon. Two of the fish had nice sacs of roe with I cured as one would cure salmon roe in making ikura. The grayling themselves were unremarkable, but the roe was quite delicious.

One summer several years ago I tent camped alongside the Madison River in Yellowstone National Park. It was glorious. Recent fires had changed the ecosystem. Not destroyed it. Changed it. Along with Yellowstone’s iconic bison, elk were abundant, the big bulls absolutely magnificent with their velvet-covered racks. We encountered moose, sandhill cranes, several black bears and a grizzly, and listened in awe as a pack of wolves howling across a valley broke the quiet one evening. It was during this stay that Maia took her first-ever fly caught trout, beautifully marked  cutthroats from Cascade Creek. We still talk about how we had to cross that stream a couple of times to avoid basking bison.

One of the highlights of that visit to Yellowstone was a morning spent alone, fishing the Gibbon River from the lip above the 80-foot falls upstream a mile or so. Although I got a late start and the sun was already high in a cloudless sky, brown trout in the eight to 13 inch range were cooperative, most of them falling to a #14 pheasant tail nymph. Mountain flowers seemed to be in bloom everywhere, birds were out in force, and I had the river completely to myself.

And then I came to the hole. Rip-rap on one side, a rock wall on the other and a log jam at the tail pushed the water into a long pool I estimated to be eight to 10 feet deep–the deepest water I’d encountered. With brush growing along the edges and with the depths guarded by drowned snags, tell-tail strands of monofilament suggested this piece of water was fairly hard-fished. So I took a while to contemplate my approach. Wishing to get as deep as possible, the first thing I did was lengthen my leader and switch to a weighted pheasant tail. I then waded to the shallows at the tail of the pool, gauged the light breeze, and executed a cast upstream to allow for a long drift right down the heart of the pool. Stripping in bright green line as it drifted toward me, I imagined my little fly descending ever deeper. Just as the last of the green line floated above a forked log at the deepest part of the pool, it ever so slightly hesitated. I gave the line a quick strip as I lifted my rod and immediately felt the weight of a decent fish. From the manner in which it fought, I knew right away it wasn’t another brown, and it certainly wasn’t a rainbow. Whitefish? I had no idea. Somehow I managed to keep clear of the snags, and a few moments later my jaw dropped as an Arctic grayling coasted into view. I’d never caught one before, and had no idea they were a possibility in any of Yellowstone’s rivers. I led it to the gravelly shallows near my feet, gently cupped it in my hand and spread it’s amazing, sail-like dorsal fin. The dark fin, wet and flecked with iridescent blue, glistened in the sun and I was reminded that this is why one should always carry a camera. Mine, of course, was up in my car. I let the silvery-gray fish slip from my hand and sink back to the depths. Moments later, following the same pattern, a second grayling presented itself to me, this one a fraction of an inch smaller than the first.

Arctic grayling (Thymallus arcticus) are an ancient fish, their ancestors having preceded their charr, trout and salmon brethren in branching off from a common ancestor some 60 million years ago. As the earth has continued to warm since the last Ice Age, grayling have retreated to ever fewer waters in the lower-48. There aren’t many places where they can still be found, and most of these are high altitude lakes in the northern Rockies. Fluvial grayling–river grayling–are fairly rare in the lower-48. In holding those fish, in being in their presence, I felt a connection to a vanished epoch populated by mastodons and mammoths, sabertooth cats, dire wolves and other species long since vanished. Although those fish were only 11 or 12 inches in length, to me, they were trophies–as fined as any fish I’ve ever landed. I’ve long thought that if and when I settle down, I would like to have fiberglas replica mounts, or perhaps a painting, made of those two  grayling, loafing near the submerged snag where I found them in that deep pool on the Gibbon River.