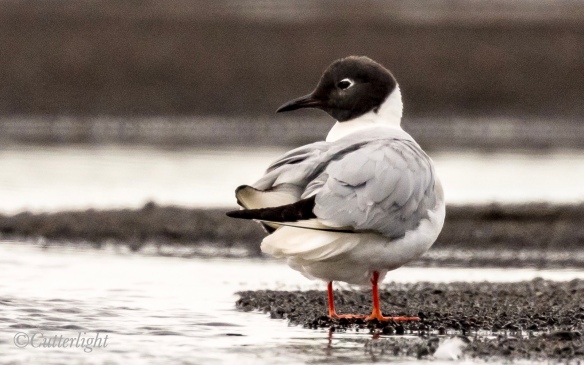 If you encounter a “masked” or “hooded” gull in The Chigniks, it is most probably a Bonaparte’s. Note the red legs, black bill and white eye ring of a bird in breeding plumage. Non-breeding adults have paler legs and either a broken up hood or just a smudge of darkness on their heads. These small, almost tern-like gulls can be found in summertime at the braided outflow of Black River on upper Chignik Lake. (Chignik Lake, July 27, 2020)

Only the Northern European Little Gull and East Asia’s Saunders’s Gull are smaller than our Bonaparte’s. Averaging just 13.5 inches in length, they are agile, acrobatic flyers, able to stop in mid-air, sweep backwards and dip to the water to snatch small fish and other food from the water. In addition to consuming fish and an array of aquatic invertebrates, Bonaparte’s are well-known insectivores. Ever the opportunists, it is likely that they feed heavily on the Chignik’s robust midge population.

As is the case with many gulls, the plumage of juvenile’s differs from that of adults. These colors and markings are typical of a mid to late summer Bonaparte’s shortly after fledging. (Chignik Lake, July 27, 2020)

Although they will nest on the ground in some locales, Bonaparte’s are primarily tree nesters, a trait that makes them unique among gulls. As they prefer taiga spruce trees – which the Alaska Peninsula in the vicinity of Chignik Lake lacks – their breeding status in the Chigniks is doubtful. However, in summertime Bonaparte’s and their fledged young can be found at the head of Chignik Lake where Black River enters. There they can be found in association with Arctic Terns, Greater Yellowlegs, Semipalmated Plovers and occasionally other gulls and shorebirds.

So… Bonaparte’s? The bird is not named after that Bonaparte, but rather one of Napoleon’s nephews, a French ornithologist who visited America in the 1820’s.

Bonaparte’s Gull Range Map: with permission from The Cornell Lab of Ornithology, Birds of the World

Status at Chignik Lake: Common Summertime Gull on Chignik Lake near the mouth of Black River

Table of Contents and Complete List of Birds of Chignik Lake