Rufous scapulars and golden-brown highlights make the Western Sandpiper among our prettiest little shorebirds. Check out the tiny spoon at the tip of this little sandpiper’s down-curved bill. Such elegant detail in a tiny being. (Chignik River, July 24, 2020)

We had irregularly been encountering flocks of anywhere from dozens to perhaps a couple hundred small shorebirds on fishing trips to Devil’s Flats. Obsessed with putting flies in front of salmon and char, I had difficulty breaking away to attempt photographs of the little peeps. But as days passed and July headed toward August, I knew I’d better get with it before the visitors migrated out.

I am occasionally taken aback with photographic evidence of just how modest some of my field estimations of numbers in flocks can be. I’d been saying “dozens” when we encountered these sandpipers, but there are well over 100 birds spilling out of this frame and there are still more birds in a separate flock nearby. If you’ve got a screen large enough to not result in eyestrain, it might be interesting to see how many birds you come up with in the above picture. (Photo by Barbra Donachy, Chignik River, July 24, 2020)

Yet, even equipped with the right photographic equipment and good intentions, it wasn’t until the evening of a day late in July that Barbra and I finally got our shots. The fishing had been good, but the birds had been no-shows. We’d called it a day and were heading back to the skiff when the peeps finally arrived. Suddenly 200 or so birds were winging their way up the river, heading straight for the gravel shores of the island where we’d beached Buster. We immediately dropped our fishing gear into a loose pile and began setting up to shoot as the birds lit down along the rocky shoreline.

At an average length of just 6½ inches – only a quarter of an inch larger than a junco – these birds presented us with the usual challenges in photographing, wary, tiny, ever-moving wild birds. We found that by crawling slowly and keeping vegetation between ourselves and the feeding sandpipers – tufts of tall grass, burdock, willows – we could approach fairly close without disturbing them. For a short while, they scurried through the river shallows and rocks bobbing their heads and feeding frenetically. At times they appeared to be using their bills to pick something minute from the water’s surface; at other times they jabbed and probed between rocks; and at still other times they seemed to use their bills as a small plows, pushing them forward to stir up the silty bottom, chirping and cheeping with enthusiasm at the smorgasbord they were finding. For a little while, there was quite a lot of busy activity.

And then they did something that astonished us. Almost as one, the feeding stopped, the chattering quieted, and the little birds seemed to disappear. Before we knew it, most of them had nestled into comfortable places among the rocks, tucked their bills beneath a wing, and closed their eyes. I’d never considered shorebirds roosting after a meal as do other birds, but of course they must. Had we not known the birds were there, I doubt we’d have noticed them. Suddenly, the many times I’d been walking along a shoreline and was startled by a flock of peeps exploding into flight practically under my feet came into focus. Even a falcon passing overhead might miss these birds at rest. It is their movement that gives them away. 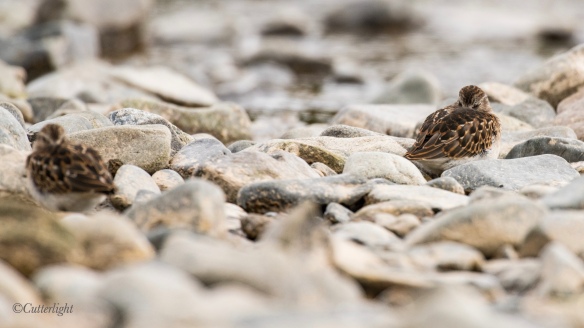 Of course, not all of the birds slept at once. Always a few remained vigilant, continuing to feed and looking about them as they did. However, we’d learned something that day, and on subsequent outings we tested ourselves by carefully looking over the ground near any actively feeding birds. At times we were able to find additional birds that were roosting, birds that in the past we would have missed.

We stayed with the shoot as long as we could, but by the end the sunlight had gone from this part of the river and a chill was seeping into the air. Who knows what prompts avian decisions? At some point the sandpipers lifted into the air and flew back downriver. I read a short essay on how it is that they manage to fly together, banking and turning in unison without colliding into each other. But I still don’t really understand it, which is well enough.

All things come to an end, and so it was with this day. Our Sockeyes for the year had already been caught, cleaned, filleted and freezer-packed, so on this day we had successfully cast to the river’s Dolly Varden Char and Pink Salmon, and whether foul-hooked or fair, a few Reds had found our flies as well. It was early still for Silvers, but we searched anyway and in so doing took note of a few King Salmon which we failed to entice. Jacob’s Ladder, Yellow Monkeyflower and River Beauty were near their peak, signs of active bears were everywhere, and on the way home I got nice photos of our fledgling Rough-legged Hawks.

The range map indicates that these sandpipers are migrants, on their way south after nesting further north. As we’ll be able to begin skiffing the river as early as we want to this coming year, an objective will be to keep a keen eye out for when these birds arrive on The Chignik.

Western Sandpiper Range Map: with permission from The Cornell Lab of Ornithology, Birds of the World

Status at Chignik Lake: Common on Chignik River gravel shorelines and bars for a few weeks in summer

1 thought on “Birds of Chignik: Western Sandpiper – Elegance in a Tiny Being”