A Black Oystercatcher works an intertidal mussel shoal at the base of Eagle Rock in Chignik Bay.

A sharp eye is likely to pick out the crimson of a Black Oystercatcher’s bill before the entire bird can be made out. Although, as can be seen in the above photo, their plumage has more brown that black in it, they tend to blend in well with the rocky, mussel-strewn habitat they prefer. There seldom seem to be many of these birds in any one place, but from the Aleutian Islands to Baja Mexico they are frequently seen in pairs, as single birds or as small family groups.  I’ve read that at times flocks of these striking birds can number in the dozens or even hundreds – no doubt an amazing sight. Look for oystercatchers especially on small rocky islands or sloping shorelines, especially at low tide when barnacle and shellfish colonies are exposed. 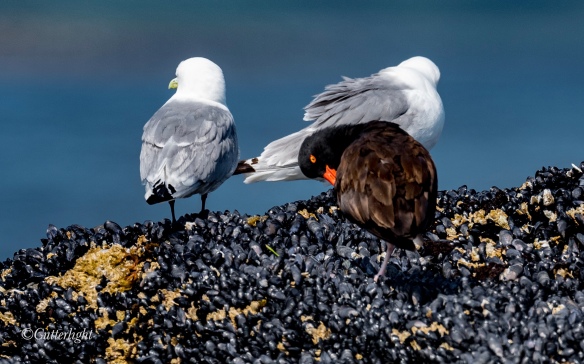 At 17.5 inches from bill to toe, the oystercatcher’s overall size compares with that of these Black-legged Kittiwakes, which measure about 17 inches.

Oystercatchers tend to be wary, taking flight with shrill yelps and piping whistles, so it pays to have a long lens or a good pair of binoculars when watching them forage. Contrary to what their name implies, their diet is fairly eclectic and includes a variety of bivalves, chitons, crabs, sea urchins, worms and other invertebrates. At times they may also feed on sandy beaches and mudflats. 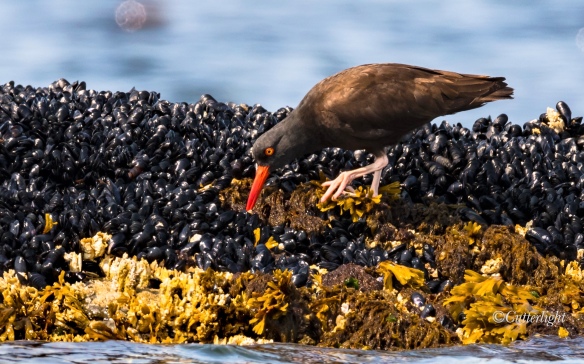 Doubtless there is all manner of deliciousness to be pried from this bed of blue mussels, and the Black Oystercatcher has the bill that fits the bill. Why the bright color? Thees matters usually have to with intraspecies identification and mating, with a nice bright bill and eye signifying health and good genes to a prospective partner.

Oystercatchers appear to mate for life. Females lay two or three eggs in a nest the male has casually scraped out above the tide line, usually on a small, rocky island. Though the young can walk soon after hatching, parents spend considerable time teaching them the ins and outs of foraging.

Black Oystercatcher Range Map: with permission from The Cornell Lab of Ornithology, Birds of the World

Status at Chignik Lake: This marine species is occasional along the shorelines of nearby Chignik Lagoon and Chignik Bay

David Narver, Birds of the Chignik River Drainage, summers 1960-63: As this is a marine species, not reported

Table of Contents and Complete List of Birds of Chignik Lake

4 thoughts on “Birds of Chignik: Black Oystercatcher – the Bill that Fits the Bill”