Approximately 10,000 Mew Gulls populate Alaska during the summertime nesting season, making it one of the gulls you’re most likely to encounter – particularly if you are around a large inland lake or river. They begin showing up at Chignik Lake in mid-spring and hang around well into fall, their ongoing crying and calling a welcome sign of warmer days. 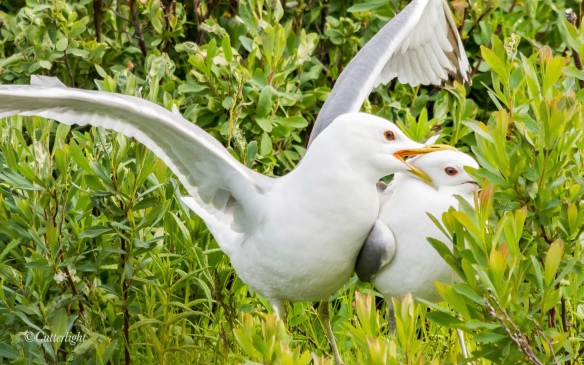 This is an act of courtship rathe than aggression. Potter Marsh, near Anchorage, is an excellent place to observe Mew Gulls nesting. Unlike our Chignik Birds, the Potter Marsh birds are habituated to humans and are reasonably tolerant of photographers. (June 24, 2017)

When it comes to gull identification – often a vexing matter – in one way Alaskans are fortunate. The gull most likely to be confused with Mews, the Ring-billed, doesn’t make it this far north. So if you see a gull that looks like a Mew – smallish, rounded white head, relatively thin bill, light gray back, dark wingtips with a splotch of white – it’s probably a Mew. When not in breeding plumage, the red orbital ring disappears. So, as with the color of the Mew’s iris (lighter in breeding birds, very dark in non-breeding birds) it can’t always be relied on as a field marker. However, there are two other characteristics worth noting. In Alaska, other than kittiwakes, as adults Mews are the only yellow-billed gull that lacks a red or black marking near the tip of the bill; (Young birds do typically have a dark bill tip.) The other feature is the adult Mew’s greenish-yellow legs. This shows up well in good light. 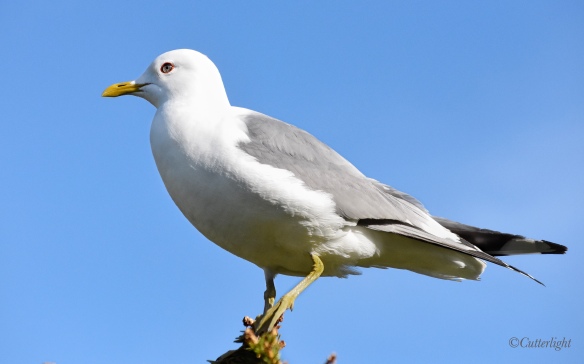 Behavior is often an excellent clue as to a species’ identity. Mew gulls have a penchant for perching in trees. In fact, they are the only white-headed gull to sometimes nest in trees – though in most locales they more commonly make their nests on the ground. Note the green cast to the legs of this specimen. (Denali National Park, July 7, 2017)

In past years, we haven’t been able to arrive at The Lake until August. By then, the nesting season is over. But we’ve seen enough very young Mews to conclude that they breed locally. As the fall salmon runs dissipate, most of Chignik Lake’s gulls leave. But throughout winter, from time to time a gull or two might show up . They’re opportunistic feeders – small fish, aquatic invertebrates, berries and carrion – particularly dead salmon – all figure in their diet. They can even catch insects on the wing. 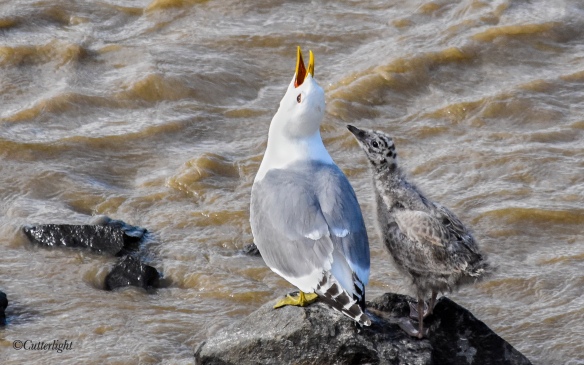 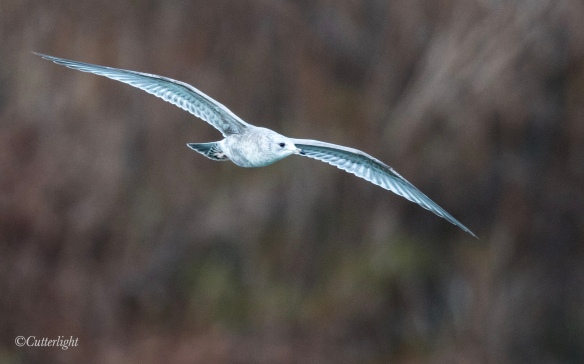 A first-year Mew Gull glides above the Chignik River in early winter, perhaps searching for salmon scraps. Note the dark bill tip. Even at this late date, there are still salmon in the Chignik system. (Chignik Lake, January 4, 2017)

As is likely the case with many birders, when I first took on this project not only did I not know much about gulls, I wasn’t sure I wanted to know much about them. Blasé white and gray ice-cream cone thieves, parking lot patrollers, I just couldn’t make myself care very much about which species I was observing.

But I’ve come to care. These are beautiful birds, adapted to all kinds of environments. Far from garbage dump parasites, Mews generally avoid human traffic, preferring instead pristine lake, river, woodland and tundra environments where they assiduously rear their chicks. Chignik Lake is a more vibrant place with them.

Mew Gull Range Map: with permission from The Cornell Lab of Ornithology, Birds of the World

Next Article: Glaucus-winged Gull – So… What’s Up with the Red Dot?

2 thoughts on “Birds of Chignik Lake: Mew Gull – The Gull of The Lake”