I was driving across the bridge spanning Young’s Bay near Astoria, Oregon on the lower Columbia River when, seemingly from the sky, a single drop of blood spattered on my windshield. It was, of course, too late to look up and gather a clue; I had already passed beneath the overhead girders where that drop had originated. But I had my suspicions.

As soon as I got to the end of the bridge and could turn around, I headed back along the course I had just traveled. Sure enough, perched on a steel beam, a Peregrine Falcon sat, claws buried in the remains of one of the bridge’s  Rock Doves – the latter known colloquially as common pigeon. In an instant I was transported decades back in time to Jean Craighead George’s magical novel My Side of the Mountain and Sam’s Peregrine Falcon, Frightful – boyhood fantasies of running off into the wilderness and living in a hollowed-out tree with my pet falcon and other woodland friends. 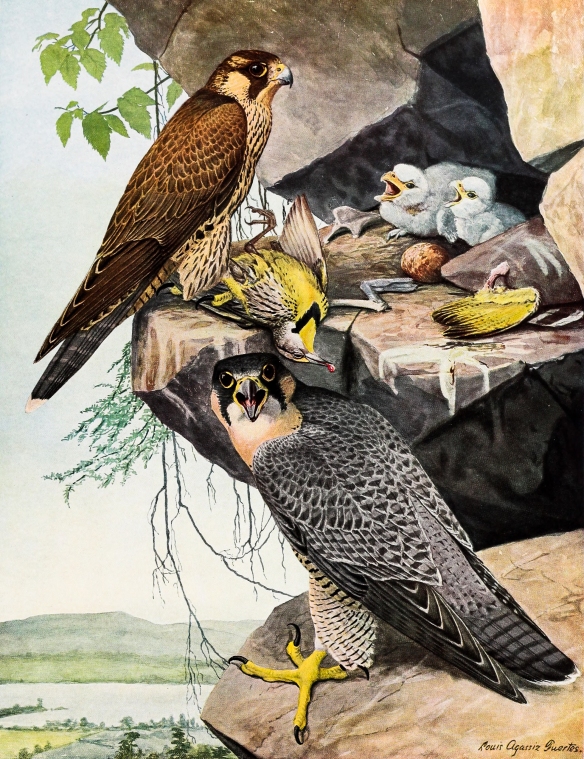 I haven’t gotten many good looks at these remarkable birds. Usually I see them as a blur while out fishing along some rocky coast. A duck or shorebird whizzes by in a panic, I look up, and there’s the falcon angling toward its intended prey, the pair gone in a flash, the outcome yet in question.

Formerly known as Duck Hawks, Peregrines are never abundant, but you might catch a glimpse of one or two along just about any rocky coastline in the world. Mudflats where shorebirds gather, too, are a good place to keep a sharp eye out. And don’t be surprised if you see a pair soaring among city skyscrapers. Building ledges make ideal nesting sites, and an abundance of the aforementioned pigeons ensure for a steady supply of food for adults and chicks.

We encountered a couple of them on a recent bicycle tour circumnavigating coastal Hokkaido, Japan’s northernmost island. Very occasionally, in fact rarely, we’ve looked up or down the Chignik Lake or River and caught sight of a specimen speeding one way or the other – southeast toward the Alaska Gulf; north toward the Bering Sea. At about 16 inches long and with a wingspan of 41 inches, Peregrines in flight appear nearly twice as large as the only falcon regularly seen along The Chignik, Merlins.

I’ve never seen a Peregrine perched along the drainage. The habitat isn’t quite right for them. These are birds of rocky cliffs. No doubt a better place to look for them would be on the Gulf side around Chignik Bay or Castle Cape. 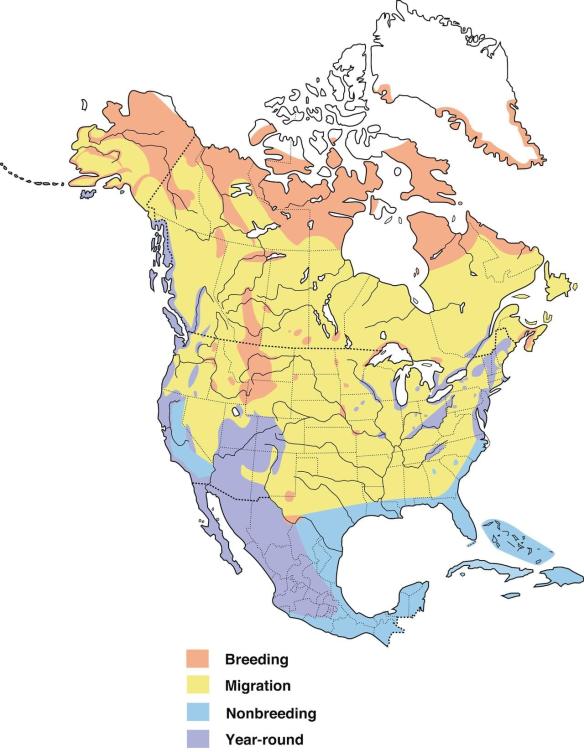 Peregrine Falcon Range Map: with permission from The Cornell Lab of Ornithology, Birds of the World

Peregrine Falcon Falco peregrinus
Order: Falconiformes
Family: Falconidae
Falco: from Latin falcis = sickle
peregrinus: from Latin for traveller. The medieval Latin phrase Falco peregrinus originated with German theologian and scholar Albertus Magnus (before 1200 to 1280) who was referring to the manner in which young Peregrines were obtained for falconry. Because the nests were generally inaccessible, young falcons were taken while journeying to their breeding grounds.

Previous: Merlin – Lady of the Lake