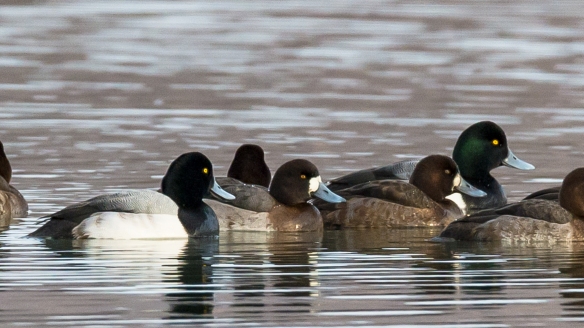 There seem to always be scaup somewhere in the Chignik System. Flocks regularly show up on the lake from fall through spring, particularly during colder winters. (Chignik Lake, January 3, 2017)

Many a winter’s day at The Lake was made more cheerful by an arriving flock of scaup. Although as few as one or two might show up, the more usual case from late fall through spring was that if there was one on the lake, there were at least a dozen or more, sometimes quite a few more. Early in the day they could sometimes be found cruising the shoreline near our home in the village. But as boats were launched and returned, they moved to the other side of the lake, a distance of approximately half-a-mile and well out of photography range. There they’d remain, day in and day out, their numbers growing as weather became increasingly inclement, usually joined by Common Goldeneyes and other ducks. 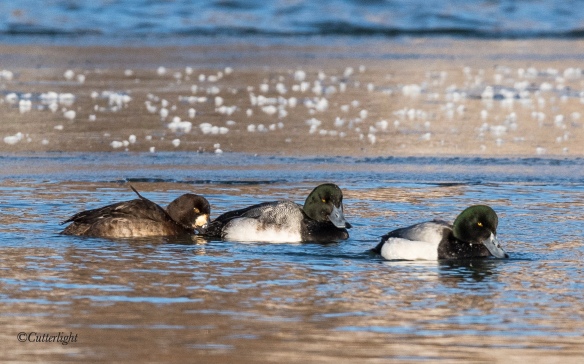 Although the male’s head often appears black, in the right light it has a distinctive green sheen which takes on a purple hue during breeding. Females sport a white mask at the base of the bill. Note the blue bill with its splotch of black lipstick and the yellow eyes. ( Chignik Lake, January 18, 2017)

I have carefully glassed individual scaup on the lake, pored over my photographs to compare images with those in field guides and can say with some confidence that there were no Lesser Scaup among the birds that visited our river and lake. I don’t know why this should be so, as both species are common in Alaska. Nonetheless, a variety of range maps are consistent in agreement that only the Greater Scaup is to be found on the peninsula. Let’s see… head a little larger, more round – but also more sloped…, slightly whiter body, a little more white in the wing stripe in flight, somewhat larger dark splotch on bill, a bit larger overall… One vexingly relative comparison after another… I give up. What does the range map indicate again? 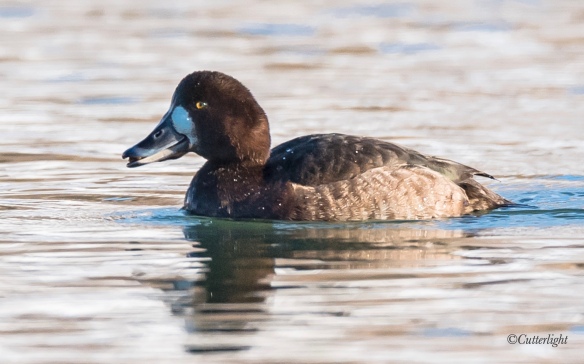 The scaup we observed appeared to feed mainly on aquatic vegetation with an occasional freshwater clam mixed in. This female has found a mollusk of some kind. It is believed that the word scaup is a Scottish variant of the northern English term “scalp,” which means “mussel bed.” (Chignik River, January 27, 2017) 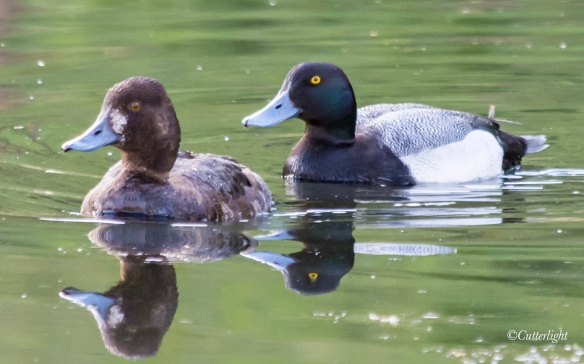 The text Birds of North America1, which despite having been written over 100 years ago continues to gain my appreciation, states that the two species vary “principally…in size.” Which seems to be as useful and honest a thing as one might say about making a field identification of scaup. That’s not to say the difference isn’t important. The extent to which any two species – or even strains of species – differ in habitat requirements and preferences makes each a bell-weather for the ecosystem it depends on. But as field observers, whether the being we are considering is a redpoll, a scaup, a steelhead or a char, it may not always be possible to know, in the field, precisely what variety of redpoll, scaup, steelhead or char we have before us.

As to the mated pair in the preceding photograph… my guess is Lesser Scaup. The female’s head appears to have a peak or corner at the rear, the male is showing a fair amount of purple in its head and only a small splotch of black on the end of its bill. The barring on his back is fairly coarse… but in the end, I can identify nothing definitive to say with certainty one way or the other. Perhaps some kind reader with greater experience than mine will come to the rescue. 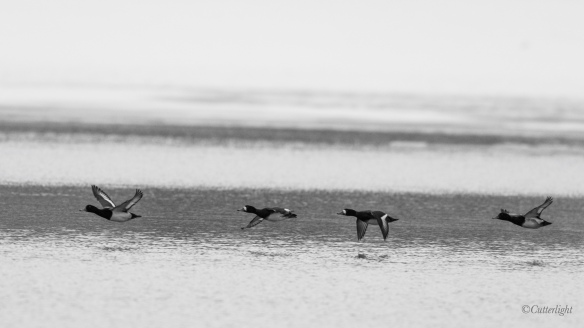 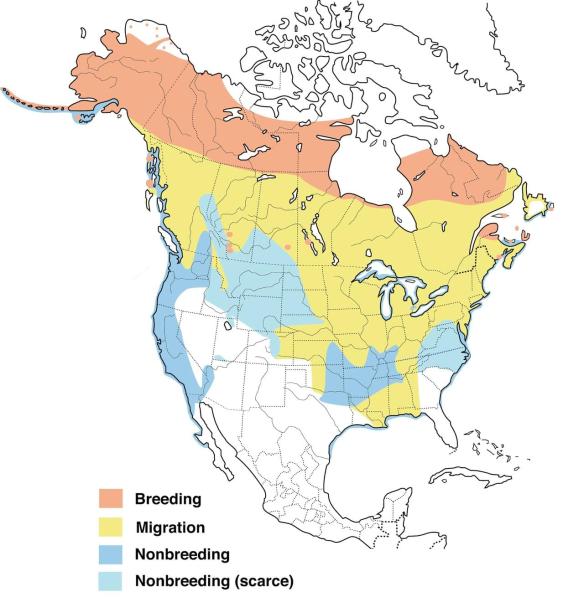 Greater Scaup Range Map: with permission from The Cornell Lab of Ornithology, Birds of the World

© All photographs, images and text by Jack Donachy unless otherwise noted.