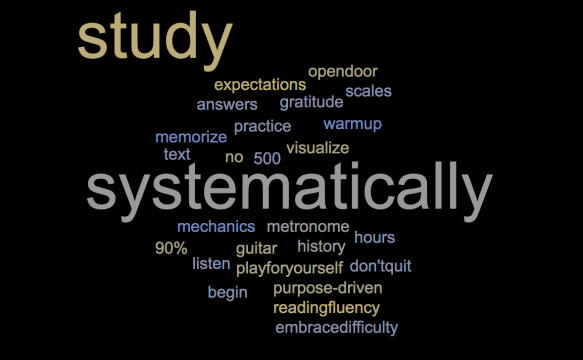 Study systematically. Virtually everyone who loves rock, blues, jazz or other music featuring guitars has formed in their minds an image of a teenager cloistered in a bedroom or garage working tirelessly with a cheap guitar to pick out riffs and chords by ear from a favorite song and then going on to guitar hero status. Although the great majority of people who embark on this route probably end up quitting before they get very far, it works for some…

Who begin as teenagers…

…with all the time in the world before them.

Work with a good teacher and a proven text of spiraled skill acquisition. Spiraled… as in beginning with an introduction regarding nomenclature, proper posture, correct hand positioning, and the names of the strings. Page by page and lesson by lesson you’ll add to your knowledge until you’ve formed a solid base that includes the ability to read music, proficiency with scales and chords, and foundational skills that include efficient shifting, flat picking and finger-style playing. Along the way, you’ll probably learn some guitar music history, too, and that can be very enjoyable – especially as your circle of friends begins to include others who are interested in such things.

For what it might be worth, I’m very happy with the sources I’ve chosen for learning the guitar. Here they are, in order of importance to my learning thus far.

The Great Courses
Learning to Play Guitar: Chords, Scales and Solos
Instructor: Collin McCallister
Don’t be put off by the somewhat low 4 out of 5 stars rating this course is receiving on The Great Courses site. Most of the complaints are over the fact that McCallister spends time discussing the historical roots of guitar music and examples of learning. Personally, I wanted to learn more about guitar history, and I find his insights into learning to play the guitar to be quite valuable. As to the guitar lessons: McCallister is a masterful musician and an energetic, engaging, sometimes humorous university professor who has taken the time to put together a carefully spiraled approach to gradual skill acquisition. He’s also more candid than over 90% of instructors out there who will happily accept your money on the subject of “how long” it takes to achieve something like Advanced Beginner status: “Hundreds of hours of practice.” I couldn’t be happier with this course.

Mel Bay’s Modern Guitar Method Grade 1
First published in 1948, this slim, 48-page book has outlived the man who wrote it. (Bay died in 1997). The longevity this book has enjoyed – along with its outright popularity (millions of copies have been sold and it’s still widely regarded as the best beginner text) – are a testimony to the intelligence and accessibility of its carefully spiraled approach to learning chords, scales and familiar songs.

Uncle Tim’s First Year: A Beginner’s Guide to the Guitar
Tim Gillespie takes a unique approach in laying out the foundation for learning the guitar. His 82-page book is filled with text rather than with songs. Interspersed are illustrations of chords, scales, flat-picking and finger-style patterns, and… hmm. That’s pretty much it. If you want to understand guitar music theory (and as an older learner, you should – this knowledge will boost your learning curve), this is a terrific resource. Do you understand The Circle of Fifths? How scales work (and therefore how lead solos are put together?) Neither did I. This book goes nicely with Collin McCallister’s class, above.

Youtube Videos and other Internet Resources
I’ve been Googling videos to listen to how songs in Mel Bay’s book are supposed to sound, to see demonstrations of finger-style patterns, for general inspiration and to expand on subjects Collin McCallister introduces in his lessons. Check out this video of Mississippi John Hurt picking John Henry.

Got a tip from your own experience learning a skill late in life? I’d love to hear about it.