Granite Dancers in Spring Snow  I walk passed this sculpture at least two times a day, every day, but this was the first time I photographed it. On this day, I knew before I left the apartment that I wanted to record it in the particular light that was falling. The snow was a bonus, adding depth and additional movement. Nikon D4, Nikkor 200-400mm f/4G IF-ED II, 200mm, ISO 100, f/4, 1/200

Watching the snow fall from inside our apartment building, I was reminded of a favorite haiku by Basho. Come! Let’s go snow-viewing/till we’re buried!

Granite Dancers in Spring Snow, high contrast This is the same exposure as above. I brought up the contrast and saturation and sharpened the edges. This image might be more marketable as a postcard, but I prefer the softer, previous image, which, to me, feels more intimate. Brick Apartment Building in Snowfall, Ulaanbaatar  This is the view out the window of my apartment in Ulaanbaatar, Mongolia. On most days, it is uninteresting to me, the occasional pigeon roosting on our windowsill notwithstanding. But on this day, the scene was transformed into something magical. I set the ISO low to preserve as much contrast as possible. Then, in processing, I brought up the contrast even more, exaggerating the blue in the window panes and the black of the railings. Nikon D800, Nikkor 50mm f1.4G, ISO 100, f/3.5, 1/125 It’s Snowing in UB  I’m not entirely sure why, but this photo and the next one tug at my gut in the way really good writing does. For me, there’s something lonesome… longing… in these shots where the focus is almost on the nearest snowflakes but not quite on anything. I imagine someone far from home, perhaps recently moved from the Mongolian steppe, or any place in the world, looking out on a city… no people, no traffic, nothing… focusing on nothing, longing for home. Nikon D800, Nikkor 50mm f/1.4G, ISO 1250, f/5, 1/1000 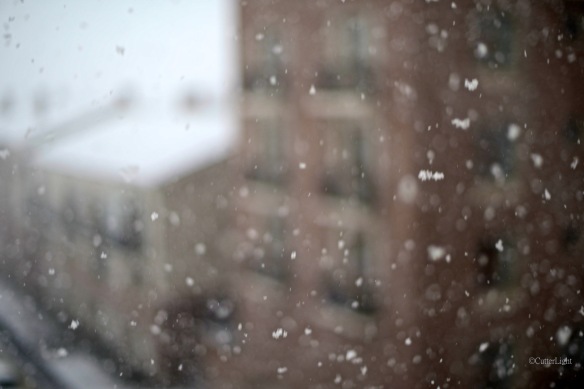 Snow and a Memory of Snow  As in the above photo, the focus is close to the viewer, yet indistinct. For me, these shots evoke a sense of thoughts being elsewhere. A person from snow country could look out the window on snowfall in any city in the world and in a moment be taken back to a memory in a small town or city, a ger out on the steppe, a woodland cabin, or anywhere. Anyway, that’s what I was going for in this image. This is probably the most purposeful, intended image I’ve taken so far. I applied a small technique to get the focal point where I wanted it to be. The image was inspired by the song It’s Snowin in Brooklyn by Ferron, a song I heard just one time on a snowy night in Boulder, Colorado back in 1985 and which has been stuck in my head all these many years till I recently rediscovered it thanks to an Internet search based on a single line from the song. Nikon D800, Nikkor 50mm f/1.4G, ISO 100, f/1.4, 1/800

Snow Streaks on Brick  For a brief few moments, a breeze kicked up, gently driving the snow diagonally. I used settings one might employ to capture rushing streams and waterfalls to capture the faint, oblique lines the driven snow was painting on the brick. In processing, by bringing up the contrast and increasing color saturation, I was able to accentuate the blackness of the railings and the blueness in the windowpanes. The splash of light and the yellow pot in the window on the right add a place for the eye to wander to in this photo. Nikon D800, Nikkor 24-70 f.2.8G ED, ISO 640, Focal Length 70mm, f/22, 1/5

Woman with Green Umbrella, Snowy Day, Ulaanbaatar  I saw her walking down the street toward our apartment when she was in the distance and began thinking about how I would compose the shot. I wanted to create a watery blur, reminiscent of an impressionist painting – evocative perhaps, of Andre Kohl’s studies of women carrying umbrellas. I’m not sure how well the green works, and even as I was framing this shot I was imagining processing it in black and white. Were I to shoot this again, I think I would decrease the shutter speed. (See next picture.) Nikon D4, Nikkor 200-400mm f/4g IF-ED II, ISO400, Focal Length 200mm, f/4, 1/640 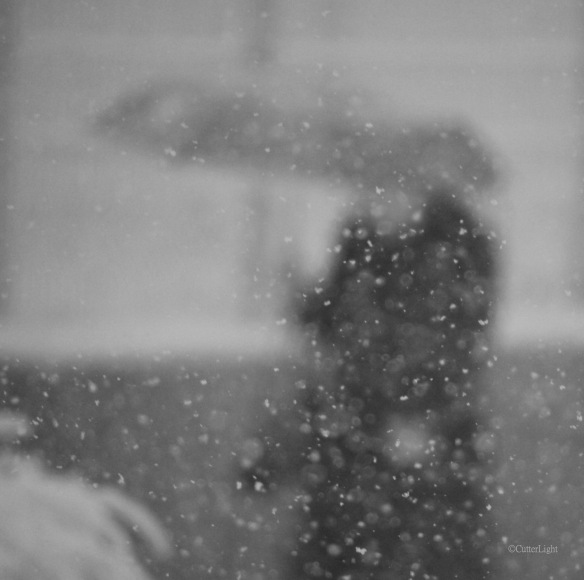 Impression of a Woman with Umbrella This is the above photo processed as a black and white shot. What do you think? I prefer this one, partly for the way the umbrella and the woman’s features are only suggested. Again, a slower shutter speed might have further enhanced the image I was striving for.

House Sparrows Framed in Spring Snow, Ulaanbaatar We pass by flocks of these friendly little guys each day on our walk to and from school. These are birds of the city – ubiquitous in northern temperate climates the world over. In fact, even in the trees along the river that runs through Ulaanbaatar, this species becomes less common, and by the time one has hiked up the forested mountain on the edge of town, they disappear altogether, so specifically adapted to co-habitation with humans have they become. But on this day, they presented themselves in fresh light, framed in falling snow. I wanted a shallow depth of field because the background could have been a distraction, and so I focused on the female and let the three males blur out a little.  Nikon D4, Nikkor 200-400mm f/4g IF-ED II, ISO400, Focal Length 400mm, f/4, 1/640

First Kestrel of Spring, Snowy Morning, Ulaanbaatar, March 26, 2015  Mongolia is home to many birds of prey, most of which fly south in late fall. I first spotted this kestrel – a type of small falcon – earlier in the week when it and a harrier were circling above our apartment building. The harrier has since moved on, but I continue to see this or other kestrels in the city. An abundance of sparrows (above photo) and plenty of buildings to use as perches make this a good place for small birds of prey to get something to eat as they migrate to their nesting sites in the mountains.

The snow was falling heavily when I heard the kestrel’s chirp from high above. I swung my lens skyward knowing I’d only get a shot or two before the glass was covered with snow. Autofocus was useless, so I did my best to manually focus while panning with the bird with a two-pound camera attached to a seven-pound lens. This image is significantly cropped and not very clear. I value it for the documentation of the year’s first kestrel, one of our favorite birds. Nikon D4, Nikkor 200-400mm f/4g IF-ED II, ISO400, Focal Length 400mm, f/4, 1/640

So what do you think?

When it was time to come back in, we were, in fact, buried in heavy, wet snow and a little worried about our cameras. But they held up fine. The next day we hiked down to the river to check the willows, poplars and pines for newly arriving songbirds. I still have to go through those photos. Next time!

11 thoughts on “Snow and a Memory of Snow: 10 Photographs during a Spring Snowfall in Ulaanbaatar”