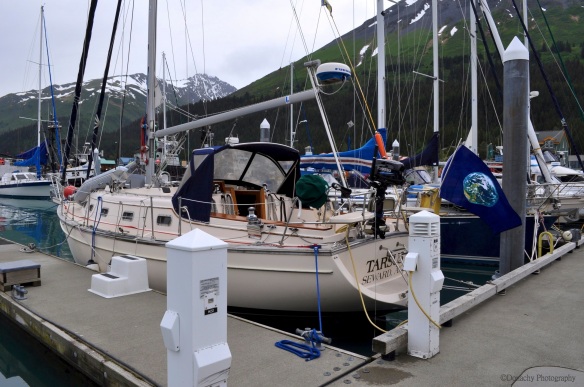 To the uninitiated, this photo may appear to be unremarkable. It’s a boat, tied to a dock. But this photo represents accomplishment and progress in small but important details in our seamanship. (We’re awaiting arrival of the new name letters we’ve ordered for the stern.)

The first time we docked Bandon, we were assigned a generously long, open slip at the end of H Dock in Seward. Nonetheless, having never docked a sailboat on our own before, bringing it in was intimidating. The boat’s 35 feet seemed to morph into 350 feet, and although there probably weren’t more than a handful of onlookers, it felt like we were in the middle of the Super Dome on Super Bowl Sunday, hearts in our throats.

There’s an art to docking, and some boats are easier to maneuver than others. Features such as twin engines and bow thrusters, which our Island Packet does not have, make precision docking easier. Features such as a full keel – which renders it all but impossible to turn the stern when in reverse – make the job more challenging. And then there are the prevailing winds pushing on the bow during the docking procedure, and the inevitable audience that inexperience seems to draw.

But the last time we brought the boat in – after a three-day cruise around Resurrection Bay – we managed to line it up and back it in… if not perfectly, at least competently. It felt good to make obvious progress with yet another aspect of seamanship. And there’s a real pay-off to docking stern first in our assigned slip: the prevailing winds are such that in the evening when we’re relaxing in our cockpit, the dodger (the canvas and clear vinyl hood above the companionway) acts as a windshield when the bow’s pointing south.

Take a walk along most docks, and it soon becomes evident that there are any number of ways to secure a boat to a horn cleat. Some work better than others. You don’t want to create a knot that might jam, but you don’t want a knot that will slip, either. The first few times we tied off, we pretty much guessed at what we were doing – resulting in the beginner’s mistake of too many wraps, and too many hitches. Now we get it: a couple turns of the line across the horns finished with a single weather hitch is both tidy and secure.

As with many things in life, if you’ve never been shown how to do something – including how to begin the task, what the process looks and feels like, and how the end product should appear – even simple tasks can prove challenging. Is this what it’s supposed to look like? and Why is this so difficult? become frequent refrains. Often times manuals appear to be written and illustrated for people who already have some expertise or background in the subject and make little sense until after you’ve figured out how something works.

Barbra rebedding a chainplate for the second time – the first go at it having gone quite wrong. We still may not have gotten it right, and will give it another go till we seal up the rain leak we’ve been trying to chase down.

There’s nothing like having access to a patient, knowledgable mentor to walk one through the steps of new tasks – and to do so as often as needed until the task is mastered. But most of the time, a combination of self-study, intuition, trial and error and a willingness to occasionally screw up and break things suffices instead. The first time we set the anchor, I wanted to pull out a pistol and shoot the whole system in the fashion of General George Patton shooting a jeep that wouldn’t start. The windlass repeatedly jammed, we had a heck of a time holding the boat in position and for the life of us, we could not figure out when the anchor was on the bottom as the chain, heavy and dense, hung straight down from the bow. We put the engine in reverse, backed up until the chain went taut and our movement stopped, and then spent a fitful night worrying that the anchor wasn’t set at all and we’d wake up to find our boat grounded.

But the anchor held, and the next morning it came up with chunks of clay and mud clinging to it, indicating it had dug in just as it should have. The next time we set the anchor, the process went smoothly… leaving us wondering how in the world it could have been so difficult the first time.

And so it goes. With a lot of what we do, the first attempt is chaotic, filled with uncertainty and error and no small amount of frustration. But we think and communicate and debrief, and subsequent attempts go more smoothly and fill us with satisfaction and, yes, pride.

Each new thing we learn is a new thing we’ve learned. This summer, our task has been to begin to master some of the most basic elements of sailing, seamanship and boat care. The learning curve, for us, is steep. But by taking things in small steps, it seems achievable. Looking into the future, it is apparent that in sailing, we have found a pass-time and a lifestyle in which there will be no end to additional skills to master, knowledge to acquire, and experiences to cherish. That’s what drew us to this in the first place. 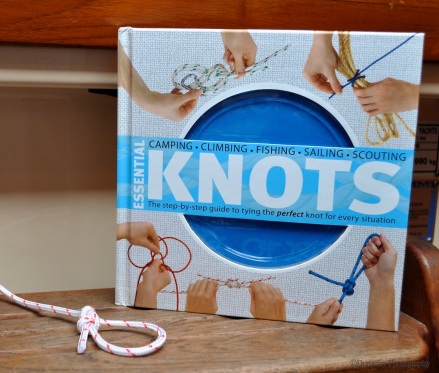 Knots are essential to sailing, and the bowline (above) is a classic with multiple uses. After consecutively tying this knot dozens of times, either one of us could probably tie it in our sleep.

10 thoughts on “Holster the Pistol, Take a Breath, Try it Again”