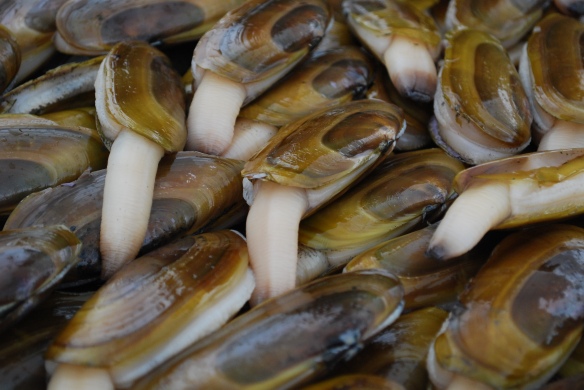 That’s a lot of razor clams. Back on the Oregon coast, the limit was thirty for the two of us. We love razors, they are THE best eating clams. Driven by our love of clams and the best clamming tide of the summer, we cruised down the Kenai coast to see what we could catch.

We got to the beach well before the peak low tide. The beach was suspiciously devoid of people and very rocky. The day before, a family of campers had told us that this beach was “loaded” with clams. Maybe we had been punked! Patience, Donachy’s, patience.

We walked south in hopes of finding sand or evidence of clams. The day was sunny, and the blue skies were reflected in the glassy waters of Cook Inlet. Shouldered with snow, Mount Iliamna loomed in the distance, catching clouds like wisps of cotton. Bald eagles seemed to be everywhere. We walked immersed in the beauty and stillness, the sun warming us.

As the tide continued to recede, here and there patches of sand began to show. And then, so did the people. Trucks and ATVs drove by and continued down the beach. A-ha! After a few more minutes of walking we joined the two dozen or so people who were beginning to dig. There were old, young, and in between. Dads were coaching kids. Groups of young girls were squealing and giggling with each clam they pulled from the wet sand.

As we joined the diggers, we were amazed at the quantity of shows—the tell-tale dimples in the sand made by each clam’s syphon. Two years earlier, we dug some clams at a nearby beach. They were huge, but we didn’t find many. On this beach, the clams were smaller, but still a good size for eating. After digging for a bit over an hour, we decided we’d better count and see where we were. We were shocked to find we had already dug one hundred clams! We were almost disappointed knowing that we only could dig twenty more.

The morning of clamming and walking the beach had been a blast! We knew we had our work cut out for us cleaning and prepping the razors for cooking. Armed with a six-pack of Alaskan White Ale and the high the two big bags of clams left us with, we went back to camp to finish the task.