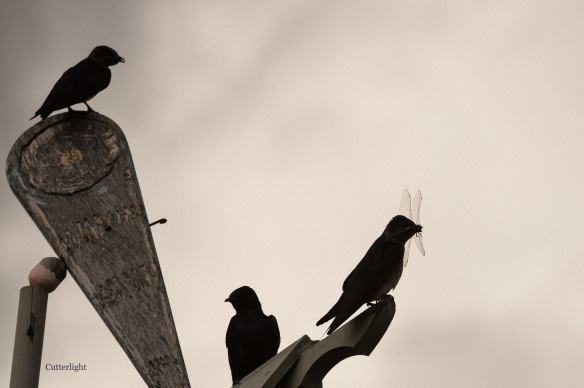 Swallows are a favorite bird wherever they fly, and among them North America’s largest and most universally appreciated species is without a doubt the Purple Martin (Progne subis). Before Europeans ever came to North America, Native Americans in the South were known to hang hollow gourds as nesting boxes to attract these birds. The beneficial nature of Martins is well known: not only do they consume enormous quantities of insects that humans consider pests – among them horseflies, beetles, termites and grasshoppers -, they also aggressively drive away birds of prey as well as crows and thus were traditionally welcomed by farmers. Often soaring at altitudes of several hundred feet, Martins capture their prey exclusively on the wing; they quench their thirst on the wing as well, skimming the surface of ponds, lakes and rivers.

Iridescent purples and gun metal blues mark the plumage of the male Martin.

Although the range of the three subspecies of Martins covers most of the U. S. and sections of southern Canada, they tend to be rather uncommon. This is due in part to their very specific nesting requirements and to the fact that invasive species – European starlings and house sparrows – frequently outcompete Martins for preferred sites. Formerly found in hollow trees, Eastern Martins have almost exclusively shifted their nests to human created housing: apartment-like complexes on poles, rows of houses side-by-side, or, particularly in the South, hollow gourds. Like Chimney Swifts and Barn Swallows, Eastern Purple Martins have become dependent upon humans for nesting sites.

The plumage of females is lighter in color, predominated by shades of brown.

The… Indian is also fond of the Martin’s company. He frequently hangs up a calabash on some twig near his camp, and in this cradle the bird keeps watch, and sallies forth to drive off the Vulture that might otherwise commit depredations on the deer-skins or pieces of venison exposed to the air to be dried. The slaves in the Southern States take more pains to accommodate this favourite bird. The calabash is neatly scooped out, and attached to the flexible top of a cane, brought from the swamp, where that plant usually grows, and placed close to their huts. Almost every country tavern has a Martin box on the upper part of its sign-board; and I have observed that the handsomer the box, the better does the inn generally prove to be.

All our cities are furnished with houses for the reception of these birds; and it is seldom that even lads bent upon mischief disturb the favoured Martin. He sweeps along the streets, here and there seizing a fly, bangs to the eaves of the houses, or peeps into them, as he poises himself in the air in front of the windows, or mounts high above the city, soaring into the clear sky, plays with the string of the child’s kite, snapping at it, as he swiftly passes, with unerring precision, or suddenly sweeps along the roofs, chasing off grimalkin, who is probably prowling in quest of his young. Birds of America, John J. Audubon, printed 1827 – 1838. 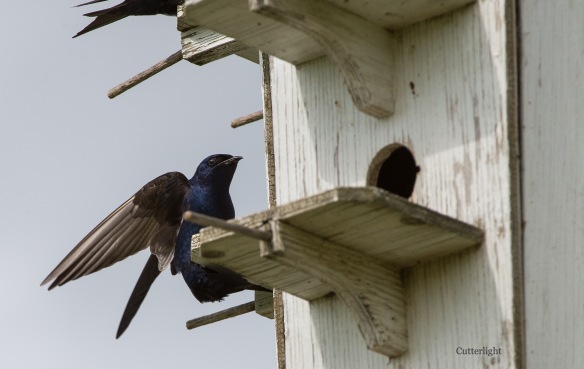 The next time you see a large flock of dark birds, look closely. Although often starlings, Martins, too, come together in the thousands and even hundreds of thousands, particularly in late summer as they prepare to migrate to South America.

For more information about Purple Martins, or to learn more about building a nesting complex of your own to attract them, visit www.purplemartin.org